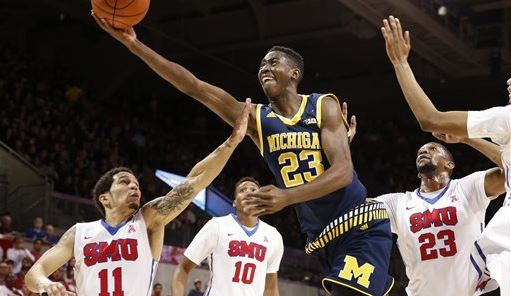 By any metric, the Michigan basketball team’s performance in Dallas was far from ideal.

By any metric, the Michigan basketball team’s performance in Dallas was far from ideal.

In the their 82-58 loss to No. 19 Southern Methodist, the Wolverines (6-3) were embarrassed on offense and defense, up top and down low, in transition and in set plays, and really everywhere in between in the blowout loss.

“Wow, that’s a really good basketball team,” said Michigan coach John Beilein of the 7-0 Mustangs. “I mean a really good team. I thought I saw a really good one with Xavier, and this is not my first rodeo either, but it’s very rare that you see a team that has that (level of skill).”

Though it was a beatdown that exceeds excuses, many of Michigan’s offensive woes can be forgiven. It is highly unlikely senior guard and leading scorer Caris LeVert will ever miss his first 11 shots again, junior guard Derrick Walton — who is still recovering from a sprained — will presumably be able to help carry the load later on and the Wolverines’ 46/27.8/50 (2/3/FT) shooting percentage splits are exceptional outliers compared to a season average of 52.3/43.5/74.8.

The defensive woes seen Tuesday night, on the other hand, seem to fall in line with a much deeper, season-long issue that will continue to plague Michigan against quality opponents. SMU finished with 1.24 points per possession and an eFG% of 64.8, well above the .995 and 49.3 the Wolverines have allowed through nine games.

It was of little surprise that standout point guard Nic Moore helped lead the charge. Moore is one of the nation’s top guards, and Michigan was missing Walton. And while the 15 points and seven assists Moore piled up weren’t ideal, they were understandable.

The true sore spot in the Wolverines’ defense came down low. Rotating sophomore Ricky Doyle, freshman Moe Wagner, redshirt freshman D.J. Wilson and junior Mark Donnal, the quartet struggled mightily as a group, combining for just four points and eight rebounds in 41 minutes, but their defense was the true shortcoming.

SMU forward Kevin Tolbert had his way around the rim from start to finish, scoring 23 points on 12 shots — including 11 dunks.

“He was like a man playing with boys out there, he just went and got it,” Beilein said. “Tolbert was just everywhere, and we’ve just got to get better.”

“That team is good. We’re a long way from being good.”

The issues weren’t just limited to Tolbert, either. As a team, SMU ended the game with an absurd 53.8 offensive rebounding percentage, well above its season average of grabbing 44% of its missed shots. By comparison, the national average offensive rebounding  average is just 30.3 and Michigan managed to get just 20.5 in Tuesday’s game.

“We have big issues there,” Beilein said. “That was a complete mismatch on the backboard.”

Using a heavy set of screens, veteran experience at all positions and good ball movement (the team’s 67.7 assist rate is well above what other opponents have tallied against Michigan the season), the Mustangs seemed to find someone open on every possession. In addition to the dominance in the paint, SMU also nailed eight 3-pointers on 15 shots, a total equal to the margin of victory.

“This shows you, if you think you’re good; you’re not good,” Beilein said. “That team (SMU) is good. We’re a long way from being good.”

Fortunately for Michigan, life gets easier upon arriving bacl to Ann Arbor. With games against Delaware State, Youngstown State, Bryant and Northern Kentucky, the Wolverines have plenty of time to learn from their mistakes.

If Beilein has his way, the humbling loss in Dallas won’t soon be forgotten.

“Knowing these guys, they’ll look at this and say, ‘OK, alright, if that’s how far away we are, we better get to work,'” Beilein said. “That’s the only thing we can take from it.”