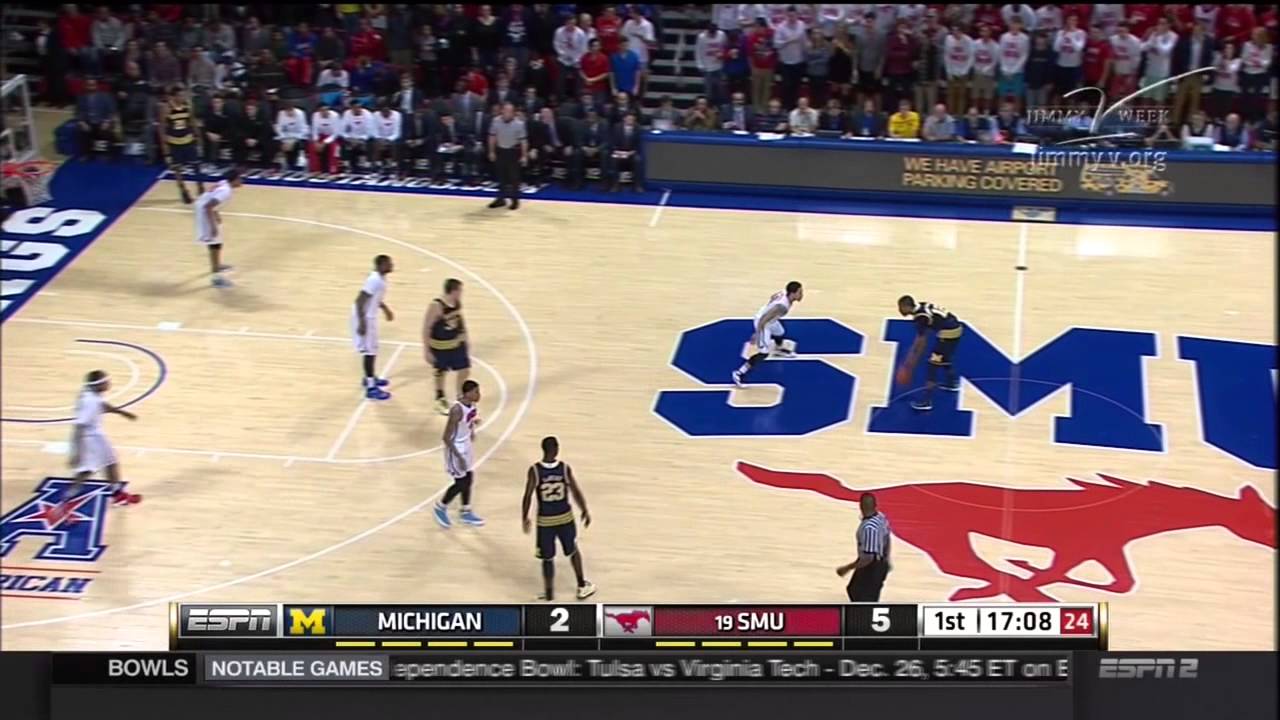 There are no ifs, ands or buts about it, the Michigan basketball team got blown out Tuesday night. No. 19 Southern Methodist embarrassed the Wolverines in rebounding, passing, shooting, defense and any other category you can think of. Michigan was exposed on all fronts, here are our Five Key Plays from the beatdown.

There are no ifs, ands or buts about it, the Michigan basketball team got blown out Tuesday night. No. 19 Southern Methodist embarrassed the Wolverines in rebounding, passing, shooting, defense and any other category you can think of. Michigan was exposed on all fronts, here are our Five Key Plays from the beatdown.

Thrust into injured junior guard Derrick Walton’s spot, sophomore Muhammad-Ali Abdur-Rahkman had his work cut out for him matched up against the Mustangs’ Nic Moore — seen by many as one of the best point guards in the country.

But Abdur-Rahkman looked up to the task early, establishing good drives and carrying Michigan’s offense early. By the games end, the sophomore tied Duncan Robinson for the team lead with 15 points on 6-of-10 shooting. The other four starters, meanwhile combined for 23 points on just 7-of-31 shooting.

Michigan’s offensive performance left little to aspire to Tuesday, but Abdur-Rahkman’s start did.

“We encourage them to drive the ball,” said Michigan coach John Beilein. “We had three or four personal fouls at halftime and had only been to the line twice. That’s not the way we wanted to play. But some of us have a habit where we’ll go to a step-back 3 when we could be driving the ball. That’s a habit we have that we’re working on.”

2) Nic Moore gets the Mustangs rolling

For most of the first half, the game was close. Both teams were struggling with turnovers and poor shot selection, and Michigan looked prime for an upset on the road. But in less than a minute, Moore turned the tide.

The senior used ball screens and good passes to find back-to-back open looks with just over three minutes remaining in the half, and hit them both to push SMU’s lead from three to nine.

Moore ended the game with 15 points and seven assists, but once he got the Mustangs rolling, he didn’t need to be the star.

“He was like a man playing with boys out there, he just went and got it,” Beilein said. “Tolbert was just everywhere, and we’ve just got to get better.”

With help from SMU’s other big men, Tolbert embarrassed all four Michigan big men that tried to stop him, and SMU actually collected more offensive rebounds (14) than the Wolverines’ did defensively (12).

“We have big issues there,” Beilein said. “That was a complete mismatch on the backboard.”

Behind Moore and Tolbert, the Mustangs went on a 13-2 tear to close the first half and but Michigan behind the eight-ball for the rest of the game. Tolbert’s production was a red flag for Michigan’s big men, but many of his easy baskets were the fault of Michigan’s guards as well as the Wolverines gave up easy dribble penetration all night.

4) Irvin dishes Michigan back into contention

It’s no secret that junior forward Zak Irvin has struggled in his gradual return to full game action after back surgery in August, but the steps have become quicker and more positive as of late.

He’s still shooting just 35.4 percent from the field and 20 percent from 3, but Irvin has shown an ability to help even when his shots aren’t falling. Trying to chip away at the 14-point halftime deficit, Irvin was able to tally three of his game-high nine assists during the 13-7 run. He also scored five points in the three-minute stretch.

The run was short-lived, however. The offense was clicking, but the defense could close the gap.

“We made some shots,” said Robinson, who tied Abdur-Rahkman with a team-high 15 points. “But we weren’t able to string together some defensive stops. That’s what you need to go on runs and get back into games.”

In addition to needing defensive stops, the Wolverines also needed contributions from their star player, but senior guard Caris LeVert instead had one of the worst games of his career. LeVert missed his first 11 shots, including misses on three consecutive possessions that ended any last-chance hope of a Michigan comeback.

“It just didn’t happen,” Beilein said. “We had two days’ rest, and we tried to rest him Sunday — we’ve been leaning on him an awful lot, so he’ll bounce back, but it was tough game for him.”

Playing in front of 19 NBA scouts, LeVert was completely shut down by the Mustangs. Michigan’s leader in points, rebounds and assists managed just five points, one rebound and three assists Tuesday night. Hovering close to 90 percent from the free throw line through eight games, LeVert went just 3-for-6 from the charity stripe.

“He’s playing a lot of minutes for us, who knows what it is,” Beilein said. “But they did a good job against him … they really challenge him and he had a tough game.

“But when he’s missing foul shots, you know that he’s had a tough game.”