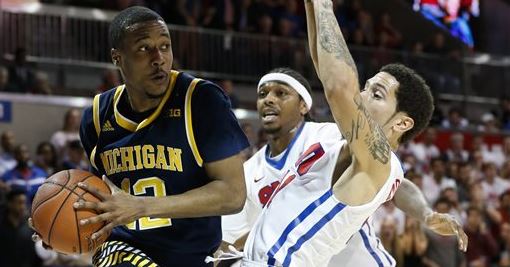 Michigan was blown off the floor in Dallas on Tuesday in a game that Wolverine fans probably should have seen coming.

Michigan was blown off the floor in Dallas on Tuesday in a game that Wolverine fans probably should have seen coming.

SMU boasted a top-15 defense in the country, a top-ten offensive rebounding attack, and a point guard with incredible quickness and shooting ability. The Wolverines have proven they can deal with one or two of those things at times — NC State had the quickness, but not the shooting; Texas had the size, but not the guard play — but not all of them at once.

Michigan has played one team with as much talent in spread across all of those areas, Xavier, and the result was exactly the same: a demoralizing blowout loss.

It didn’t help that the Wolverines were without their point guard, Derrick Walton, who happens to be their best perimeter defender and defensive rebounder, but this was a humbling reminder of last season for a team that wants to prove its moved beyond.

Michigan hung with the Mustangs for the first 15 minutes, but Nic Moore broke the game open late in the first half. The 5-foot-9 guard, who was clearly the best player on the floor, sprung to life with back-to-back threes and then dished three consecutive assists to take the SMU lead from three-points to 14 in two minutes and thirty seconds.

The story of this game was that SMU got good shots and Michigan got bad shots. The Mustangs switched essentially every screen defensively which left Michigan treading water passing the ball around the perimeter. The Wolverines were whistled for three shot clock violations in the first half and looked befuddled trying to run offense.

“Some of us have a habit of going to a step-back 3 when we could be driving the ball,” Beilein said after the loss. “That’s a flaw we have that we’re working on.”

It’s also a flaw that’s quite obvious in this graph of both teams’ shot selection on the night.

Both teams entered the game shooting 44% from three-point range. Tonight, SMU got shots at the rim and open threes. Michigan couldn’t finish inside and attempted three dozen (mostly contested) threes.

You can’t win give up 26 easy shots at the rim — Jordan Tolbert scored 23 points on 11 dunks and layups — and let your opponent shoot 57% from three and have any hope of winning, especially if you let them rebound over half of their missed shots. This was just a clinic by SMU as it ran the ball screen game to perfection to create easy opportunity after easy opportunity and hit over half of its open threes while rebounding half of its misses. There was no positive for Michigan on defense in this one, the Wolverines were just whooped.

If there was any question how important Derrick Walton was to this team as a creator, shooter, defender and defensive rebounder, there shouldn’t be anymore. Michigan probably doesn’t beat SMU with Walton, but this game would have been far more competitive. His health is probably the most important priority leading into Big Ten play, but the Wolverines need to make sure they don’t let one bad loss turn into two. We’ve seen that this year with Xavier into a horrific shooting game against UConn and early last year with NJIT into Eastern Michigan. Delaware State, Northern Kentucky, Youngstown State and Bryant are all ranked worse than 255th in the country, but should provide an opportunity for Michigan to improve before tipping off conference play.