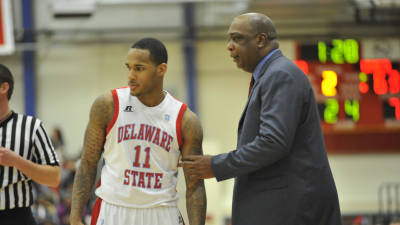 Michigan hosts Delaware State (0-8) on Saturday afternoon as it looks to bounce back from Tuesday’s loss while facing one of the worst teams in Division I.

Michigan hosts Delaware State (0-8) on Saturday afternoon as it looks to bounce back from Tuesday’s loss while facing one of the worst teams in Division I.

The Hornets have been hurtling toward the last spot in KenPom’s rankings steadily this year, opening the season at 335th and falling steadily to 345th in the country. Most recently, they lost 82-38 at Old Dominion — the only top-100 team on its schedule to date — in their worst loss of the season.

There’s a whole lot of red on Delaware State’s KenPom profile. The Hornets’ offense is ranked 345th nationally and they are one of the worst shooting teams in the country. DSU shoots 38% on twos (344th), 29% on threes (308th) for just a 40% effective field goal percentage. Delaware State has failed to reach a point per possession of offensive output this season and has topped .9 points per trip just twice — against Nebraska and Lamar.

Delaware State rarely gets to the free throw line (25 FTA per 100 FGA) and is a poor shooting team when it does get there, connecting on just 58% of its freebies. The Hornets are also ranked 235th or worse in turnover rate (20% of possessions) and offensive rebounding rate (26.7%).

The Delaware State defense is terrible inside. The Hornets allow their opponents to shoot 53% on twos (297th) and rebound 39.9% of their missed shots (342nd) on the season. Teams attempt a lot of threes — 43% of FGA (335th) and shoot 34.6% from long distance — against DSU’s zone defense for a 52.6 effective field goal percentage. Duncan Robinson should be salivating at the sight of this zone defense as the three-point opportunities should be available early and often.

Delaware State plays its bench more minutes than any other team in the country. Hornet starters account for only 50% of available minutes and head coach Keith Walker will routinely play 12 or more players in a given game with 13 Hornets averaging over 10 minutes per game.

6-foot-2 junior DeAndre Haywood is the primary playmaker and distributor for the Hornets. Haywood leads the team in scoring at 8.8 points per game and gets to the free throw line more often than his teammates, but is just a 46% shooter at the charity stripe. The majority of his offense comes inside the arc, but he’s a 50% shooter from deep.

6-foot-3 sophomore Todd Hughes leads the Hornets in field goal attempts, but is woefully inefficient. He’s connecting on just 28% of his twos (14-50) and 23% of his threes (3-13) and averages twice as many turnovers as assists per game.

Malik Carter and Devin Morgan are two other guards with the ability to distribute. Morgan shoots 48% on twos, but the majority of his shot attempts are threes where he connects at just a 24% clip. Carter has a team-leading assist rate, but shoots just 30% on twos and 18% on threes this year.

The best rebounder on the roster is 6-foot-9, 225 pound junior Joseph Lewis.Lewis has an impressive defensive rebounding rate, but he’s not an effective offensive player. He’s shooting a meager 39% on twos and 29% on threes on the season.

This is a game that Michigan should win comfortably and probably won’t learn much about itself in the process. KenPom projects a 78-54 Wolverine victory and gives Delaware State just a 1% shot at an upset in Ann Arbor. The Wolverines have plenty to improve on defensively, but facing off against the worst offensive team on the schedule isn’t going to serve as much as a progress report.

This game should be an opportunity to potentially rest Derrick Walton and also continue to get other players some experience including in the frontcourt where Moritz Wagner and DJ Wilson haven’t really been able to get their feet underneath them in recent weeks.