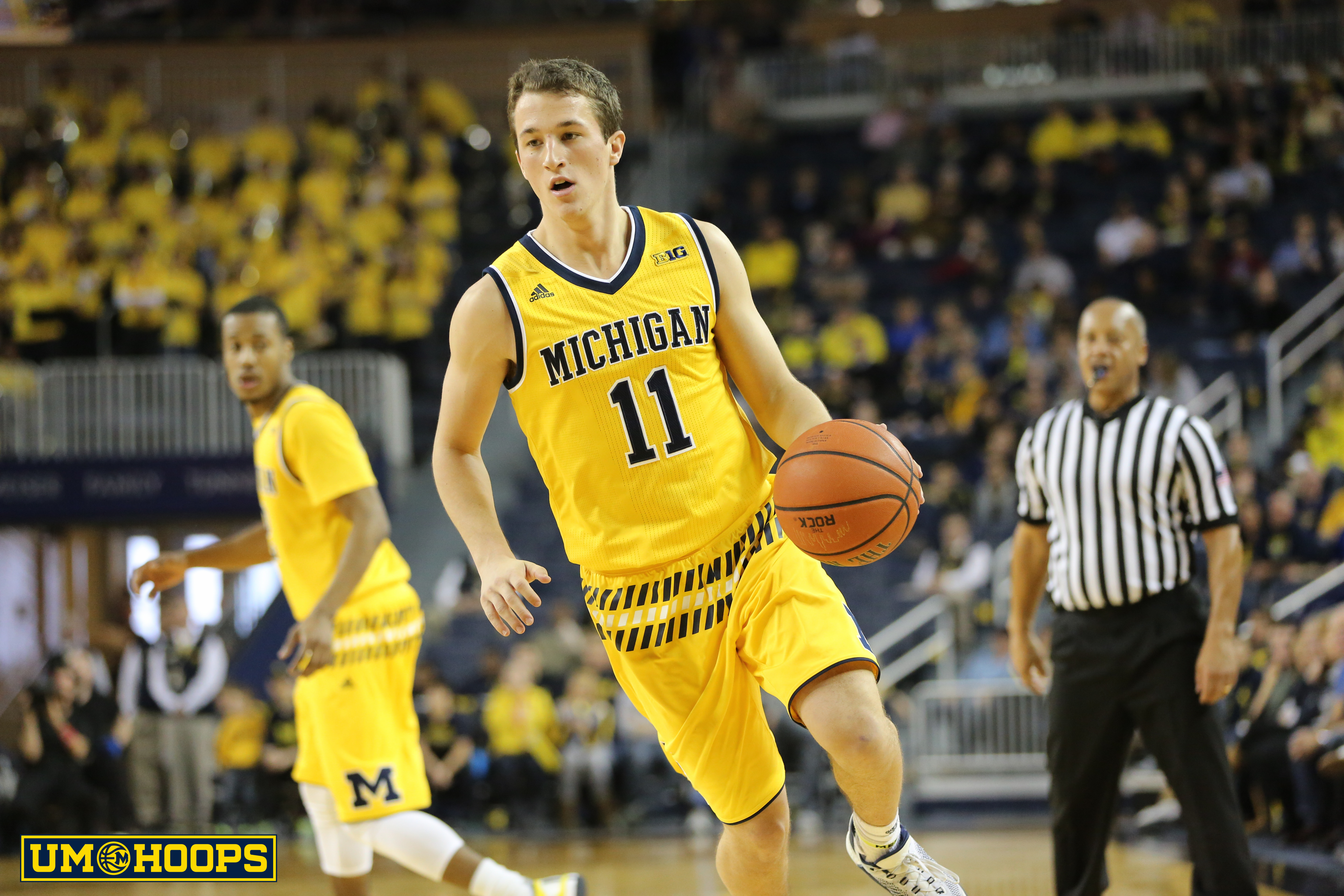 It’s no surprise that the Michigan basketball team blew out Delaware State, 80-33 on Saturday, but that’s not to say the game didn’t turn any heads.

It’s no surprise that the Michigan basketball team blew out Delaware State, 80-33 on Saturday, but that’s not to say the game didn’t turn any heads.

After coming off the bench in the Wolverines’ first nine games, redshirt sophomore forward Duncan Robinson was given his first start at Michigan. It wasn’t an unjustified decision — Robinson entered the game second on the team in scoring — but the 3-point specialist made sure Michigan coach John Beilein didn’t regret it.

Robinson scored the game’s first points with a wide-open 3, and was a critical part of Michigan’s 27-8 run to start the game that effectively ended it.

“We feel right now our flow defensively and offensively is better as a starter for Duncan,” Beilein said. “Get him in there and let him go and get more scorers out there.

But against the Hornets, both players benefited from their new roles. Robinson got the offense flowing, and Dawkins was able to enter a more comfortable offense and pick up three assists.

“(Robinson) and Aubrey do a lot of things very similar, there’s just a different flow right now with him,” Beilein said. “I think it make other guys better, and as we work at some of the things Aubrey’s working at, we can shore some of his weaknesses up, which I think we did some of it today.”

Michigan will have a few more light games to figure things out further before Big Ten play starts, but for now Beilein is pleased.

“In preparation for games, those are five guys that we’re starting right now that we feel very comfortable with not only at the beginning, but at the end of the game as well.”

Dakich no longer wetting himself

As Michigan began to move on from Spike Albrecht’s retirement, the fans at the Crisler Center saw junior guard Andrew Dakich enter the game for the first time all season midway through the first half.

Originally planning to redshirt, Dakich jumped at the chance to forgo future plans and get in the game.

“I don’t want to redshirt,” Dakich said. “I just thought it would’ve maybe given me a year to have and maybe go somewhere else or maybe play here (a fifth year). But at the same time, this is kind of a dream. To play in the Big Ten.”

He got to live that dream a bit last season — playing the final 13 games in as injuries piled up for Michigan — but it was by and large unsuccessful.

Dakich tallied seven points, two assists and three turnovers, the Wolverines went 5-8 in the stretch and Dakich rarely looked comfortable on the court.

Last year, I literally peed down my leg every single game

“Last year, I literally peed down my leg every single game,” Dakich said. “Last year, I was pretty scared of my own shadow, to be honest. That was kind of evident.”

Though the winless Hornets are a far cry from Big Ten basketball, Dakich looked more comfortable. In 20 minutes off the bench, Dakich scored four points and added three assists and two rebounds, and in several instances was the vocal leader on the court.

It may seem small in the context of the game, but for Dakich, it was a big step forward.

“I had a blast out there today,” he said. “I didn’t really have a blast last year.”

Though Dakich will even admit his skills, athleticism and basketball abilities are below that of his scholarship teammates, the walk-on continues to improve in practice, and his coach has taken notice.

“He doesn’t look the part, but he sees the floor, he’s got a lot of Spike in him,” Beilein said. “I’ve got a lot of confidence in him right now. I watch it every day.

“Every day when we play against the scout team, there’ll be a moment in that scout game where the game’s on the line, this is for the sprint. And Andrew will make a play that helps the other team win. Every day, there’s these times that he’s got that ‘it’ feel to game … It’s as good as we can do right now to replace Spike.”

For a change, Michigan’s inside game made the most noise Saturday. After getting outscored, 42-16 in the paint against SMU, the Wolverines flipped the script against Delaware State, winning the paint battle, 36-10, with eight of the Hornets’ paint points coming in the waning moments of the 47-point blowout.

“Well you certainly have two different teams between SMU and Delaware State,” Beilein said. “The growth we made in those couple of days from that really disappointing performance.”

The improvement had two components. First, the offense moved the ball around better than in previous games (assisting on 23 of 36 made field goals), opening up driving lanes for players like Zak Irvin, Abdur-Rahkman and LeVert.

Second, uncharacteristically aggressive play from forwards like Doyle and Kam Chatman created serious offensive potential near the basket, a welcome sight to Beilein.

“On offense the ball didn’t stick nearly as much, we had 23 assists,” Beilein said. “You hate to lose, you really hate to lose … the only good in it is maybe it makes us better in some other areas.”