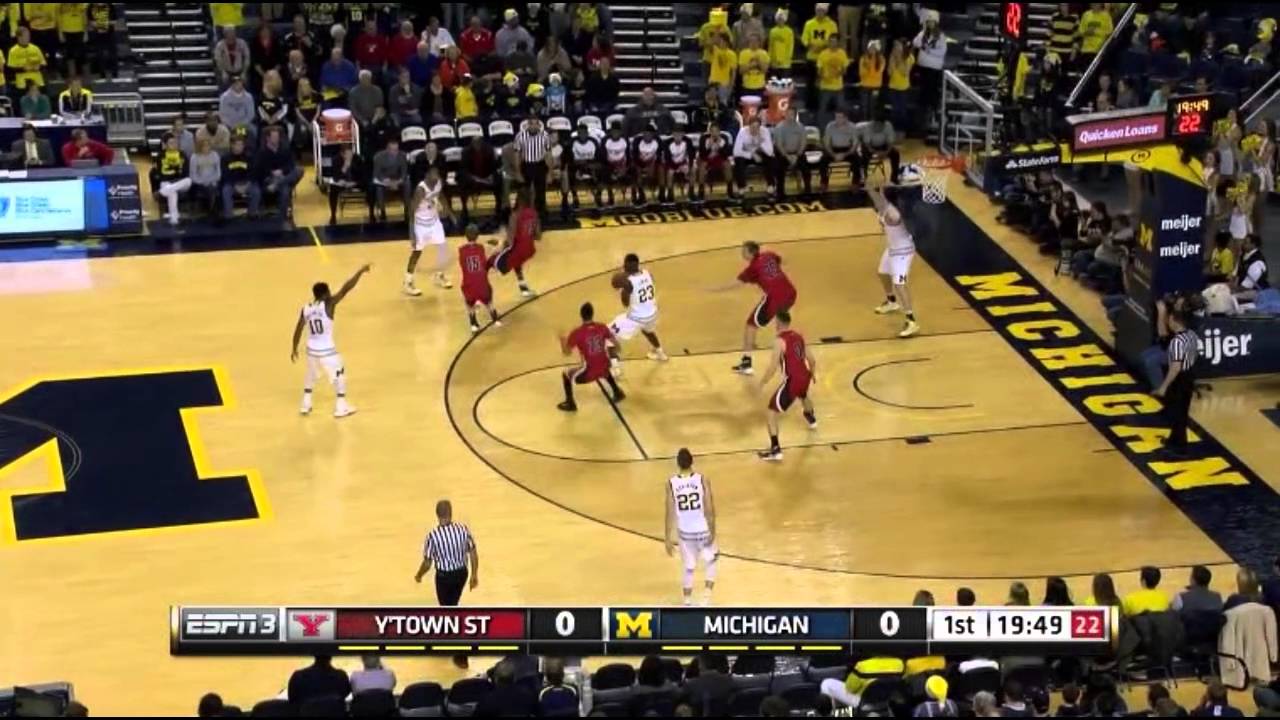 With its third win in a row, Michigan continues to blow lesser opponents out. This time, it was a 105-46 thrashing of Youngstown State.

Though the score indicated there wasn’t much excitement, the Wolverines flexed their offensive muscles, draining 3s, throwing down highlight-reel dunks and even recording another triple double. Here are our Five Key Plays from the game.

With its third win in a row, Michigan continues to blow lesser opponents out. This time, it was a 105-46 thrashing of Youngstown State.

Though the score indicated there wasn’t much excitement, the Wolverines flexed their offensive muscles, draining 3s, throwing down highlight-reel dunks and even recording another triple double. Here are our Five Key Plays from the game:

Through strong passing and even stronger 3-point shooting, the Wolverines have proven to be one of the hardest offenses in the country to play zone against. Michigan grades out in the 97th percentile nationally in offensive efficiency against zone defenses, according to Synergy Sports.

That was on full display from the opening tipoff. This possession set the tone and was impressive given the patience that the Wolverines showed, throwing nine passes entering the ball into the middle of the zone twice before finally delivering the ball to sophomore forward Ricky Doyle for the easy bucket by the rim.

It was only the beginning for the Wolverines. Five players scored in double-figures and eight players had eight or more points in an offensive clinic.

It was no secret that sophomore forward Aubrey Dawkins had been struggling as of late. In his last three games, Dawkins went 3-for-12 from the field and had struggled to make an impact on offense other than by turning the ball over. Michigan coach John Beilein recognized this, and made redshirt sophomore forward Duncan Robinson the starter at the three position.

Dawkins was the fifth man off the bench on Saturday, a demotion that clearly appeared to have affected his confidence. He drifted open almost immediately against the Youngstown State defense, but hesitated to shoot the ball when he caught the ball before finally firing up an uncertain missed three.

In a subtle bit of coaching that’s especially important in games like this, Beilein immediately went back to Dawkins after the ensuing media timeout. Beilein drew up a simple curl set to Dawkins to try to get his sophomore wing going.

“They told me to stay ready, stay focused and just don’t overthink the game,” Dawkins said after the game. “It’s a simple game, don’t put too much thought into it … the less you think, the better it will be for you.”

The advice worked. Dawkins scored out of the timeout, and was off to the races.

Pick your Dawkins highlight from Saturday, and you’ll have a fantastic play. Despite entering midway through, Dawkins closed the first half with double-digit points. Some were threes, some were a 360-degree dunk or a one-handed alley-oop that drew a foul, but it may have been Dawkins best performance of the season — and that’s not including his strong passes and defensive efforts.

But for Beilein, it was the effort that went into Dawkins’ highlights that wowed him.

Ultimately, Dawkins ended the game with 19 points, the No. 6 sport on SportsCenter’s Top 10 plays and 0 turnovers in 16 minutes.

4. Derrick Walton puts on a show

Through 99 seasons of Michigan basketball, a triple-double was one of the rarest achievements a player could have — only three Wolverines had done it before. But this week, Michigan made it look routine, pulling off the feat twice in as many games.

After LeVert hit the milestone in Tuesday’s win over Northern Kentucky, it was junior guard Derrick Walton’s turn Saturday. Picking up seven assists in the first half, Walton led a pass-happy team to a hot start. Then, as he neared closer in rebounds, the team took notice.

“I didn’t know what was going on Tuesday, but I figured out something was happening this time,” Beilein said. “I asked the guys on the bench what was going on, and they told me Derrick only needed one more rebound for another triple-double.

“I was worried, because rebounds have to come to you, but he got it very quickly.”

Though Walton and LeVert made it look easy this week, they remain among Gary Grant, Darius Morris and Manny Harris as the only Wolverines to ever pull off a triple-double.

After suffering an ankle sprain just over a week ago, many figured redshirt freshman forward D.J. Wilson would miss a few weeks. Already serving essentially as Michigan’s fourth big man before the injury, there seemed to be no reason to rush him back onto the court.

But with six minutes to go, Wilson checked in, and his teammates were happy to see him back on the floor. Wilson made the most out of his opportunity, scoring a season-high 12 points in six minutes of garbage time.

Wilson got involved around the basket early by catching drop-off passes near the rim, but he pushed Michigan over the century mark and to its largest margin of victory since 1919 with a pair of corner threes in the final minute of play.