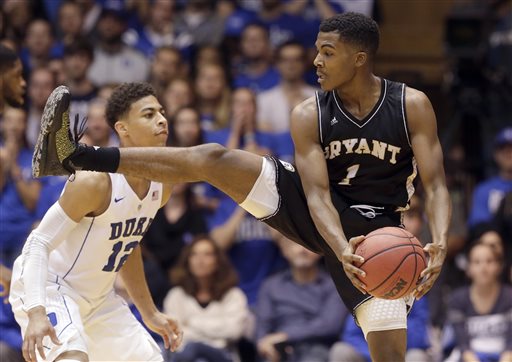 Michigan wraps up its non-conference slate tonight against Bryant at the Crisler Center. The Bulldogs have had eleven days to prepare for the Wolverines after giving Providence a scare at the Dunkin’ Donuts Center earlier this month.

Michigan wraps up its non-conference slate tonight against Bryant at the Crisler Center. The Bulldogs have had eleven days to prepare for the Wolverines after giving Providence a scare at the Dunkin’ Donuts Center earlier this month.

Bryant enters tonight’s’ game ranked 329th by KenPom with the 323rd best offense and the 300th best defense. The Bulldogs have just one win over a Division I team — November 20th against 346th ranked Prairie View A&M — and have seen their fair share of lopsided defeats.

Bryant’s offense struggles because its one of the worst shooting teams in the country. The Bulldogs shoot just 57% at the free throw line, a stat wihch ranks 350th out of 351 Division I teams and aren’t much better from the field. Bryant shoots 44.2% (282nd) on twos and 27.5% (337th) on threes for a 43.2 effective field goal percentage (330th). The Bulldogs give the ball away on a fifth of their offensive possessions (271st) and only rebound a quarter of their missed shots (296th). There aren’t many redeeming traits on Bryant’s offensive resume and it has topped a point per possession just twice this season: in wins over Emerson and Prairie View A&M.

Defensively, Bryant does a great job of avoiding fouls. The Bulldogs surrender only 31 free throws per 100 field goal attempts (71st), but that foul-averse behavior leads to plenty of easy baskets. Bryant opponents are shooting 55.6% on two-point attempts (330th) and 35.7% on three-point attempts (234th) for a 54.7 effective field goal percentage (313th). The Bulldogs do play plenty of 2-3 zone which results in a high number of 3PA (43 3PA per 100 FGA, 339th).

6-foot-2 guard Hunter Ware leads the Bulldogs in scoring. He shoots 48% on twos and 32% on threes with close to a 50-50 split of field goal attempts. Ware hit 50% of his threes at Providence earlier this month, helping the Bulldogs stay close in Rhode Island, but he was just 3 of his last 19 from long distance before that game.

6-foot-7 junior Dan Garvin is a double-double type of player. He’s great on both backboards, blocks shots, and leads Bryant in usage despite shooting just 40% on twos and 13% on threes this season. Zak Irvin should draw the assignment to stay in front of Garvin and could have his hands full inside.

Freshman guard Nisre Zouzoua is Bryant’s third double-digit scorer. ZouZoua is a 6-foot-2 freshman with a reputable three-point shot. He’s knocking down 34% of his long range attempts, but just 36% of his shot attempts inside the arc.

Senior guard Shane McLaughlin is averaging 37 minutes per game and the 6-foot-1 point guard is Bryant’s only true setup man. McLaughlin shoots 50% on twos and 29% on threes, but also gives the ball away on nearly a third of his possessions.

6-foot-8 freshman Marcel Pettway starts inside and is an above-average rebounder who can also finish with a 52% 2-point shooting percentage. At 6-foot-8, 250 pound, he should have the strength down low to bang with  Ricky Doyle and Michigan’s five-men a bit, but he’s not very involved in the Bryant offense.

Bryant gave Providence a scare a couple weeks back and that should provide some pause, but the Friars were playing without All-American guard Kris Dunn. KenPom projects a 79-57 Wolverine victory, giving the Bulldogs just a 2% shot at the road upset and this should be Michigan’s fourth straightforward guarantee game in a row. The metrics say that Bryant is much closer to Delaware State than Youngstown State or Northern Kentucky.

Most of all this is a final chance to get everyone on the same page with conference play just a week away. The Wolverines will hope to get Zak Irvin’s three-point shot clicking and keep everyone healthy while escaping with one more non-conference victory.