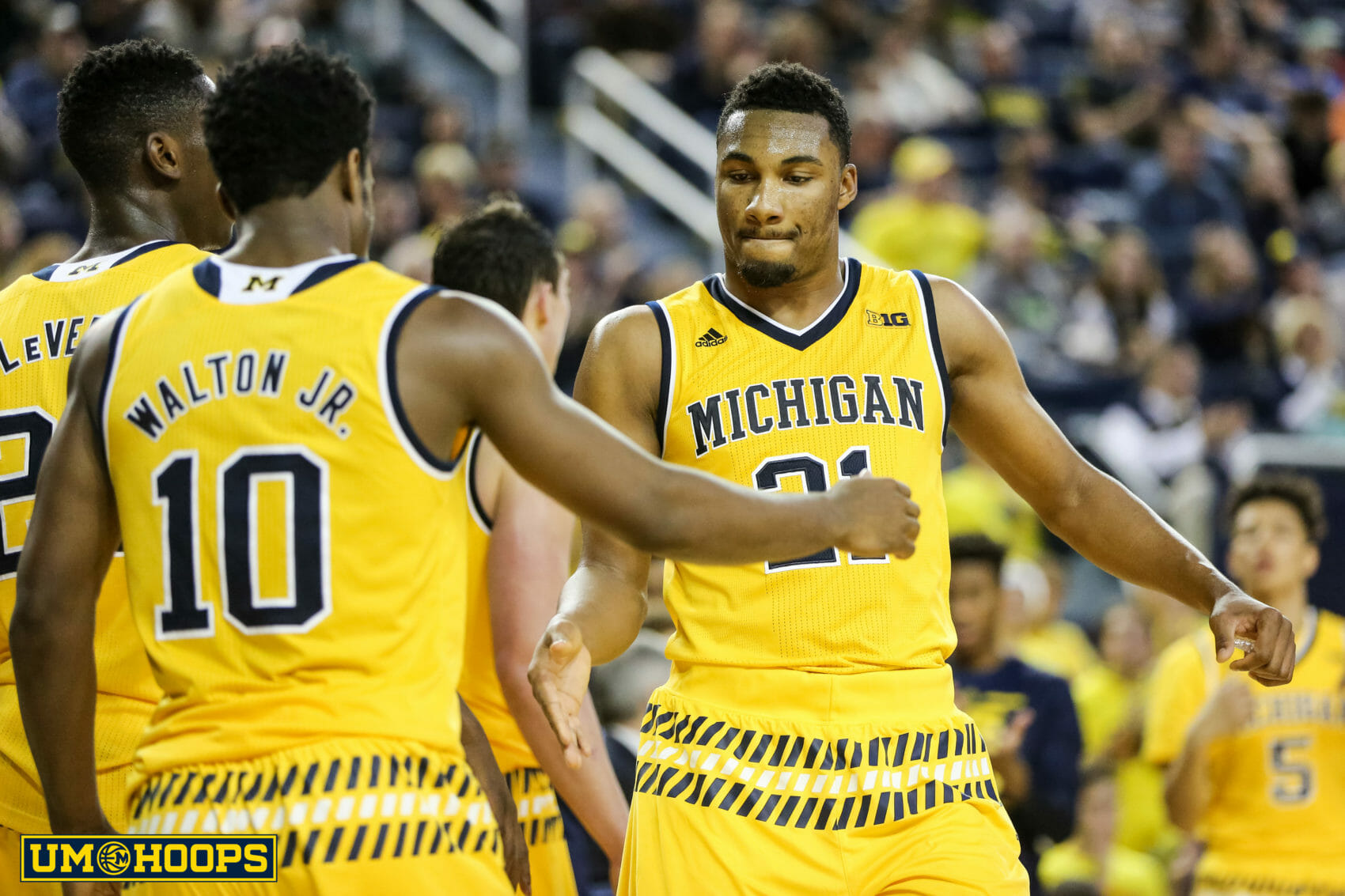 The non-conference portion of Michigan’s schedule is complete and the Wolverines sit at 10-3 heading into Wednesday’s Big Ten opener at Illinois. Here’s a player-by-player breakdown of how each Wolverine performed through the first 13 games of the season.

The non-conference portion of Michigan’s schedule is complete and the Wolverines sit at 10-3 heading into Wednesday’s Big Ten opener at Illinois.

Here’s a player-by-player breakdown of how each Wolverine performed through the first 13 games of the season:

As a result, LeVert has raised his 2-point field goal percentage by over 10% and his free throw rate has risen from 29 free throw attempts per 100 field goal attempts to 47.

LeVert is the most efficient player in the country that uses at least a quarter of his team’s possessions and he’s been almost flawless offensively other than a disastrous game at SMU.

Walton fills a rare void for Michigan as its leading defensive rebounder, creator and spot-up shooter. Walton is ranked 11th in the Big Ten in defensive rebounding rate, 9th in the league in assist rate, 3rd in three-point shooting and 2nd in steal rate. It might have come as a surprise to some that Walton recorded a triple-double this non-conference season, but it shouldn’t have. Walton has also bumped his two-point shooting back toward his freshman levels at 44%, proving last year’s 32% inside the arc shooting was an anomaly due to injury.

With Spike Albrecht’s injury, there might not be a more important player on Michigan’s roster than Walton. When he plays well, the Wolverines play well and when he struggles or is injured, the team has struggled.

Zak Irvin is doing everything other than knocking in open threes. His assist numbers are up, his defensive rebounding numbers are solid, and he’s shooting an impressive 64% inside the arc. But for whatever reason the threes won’t fall. He’s just 9-of-45 from long distance on the year, but is shooting an astounding 94% at the rim. I wrote last week that Irvin re-discovering his stroke would be critical moving forward and he showed at least signs of that by knocking down a pair of triples in the non-conference finale.

Since Duncan Robinson went 1-of-6 from long distance against UConn in Michigan’s opening round loss at the Battle 4 Atlantis, his worst shooting night by percentage was 4-of-8 against Bryant and his worst by volume was three makes. He’s reached double figures in eight straight games and handed out 15 assists over the last four, more than double his total in the first nine games.

He’s leading the country in effective field goal percentage at 83.3% and his average three-point attempt is worth a ridiculous 1.8 points per shot and according to metrics from ShotAnalytics, Robinson’s shot attempts score a NCAA-best 58.9 points above expectation per 100 attempts based on the expected value of his distribution of shot attempts. There were legitimate questions as to how Robinson’s game would translate to the Division I level, but after 13 games he’s put most of them to rest. Teams will adapt their defenses to contain his shooting ability, but his mere threat should help the other four players on the floor at any given time.

Ricky Doyle is a capable finisher when he catches the ball around the basket, but right now catching the ball cleanly has been his biggest issue. Doyle’s turnover rate of 26% (35% in Michigan’s five most-difficult games) is killing the 65% two-point shooter’s overall efficiency. Michigan needs more from its big men and Doyle is the first candidate to step up as he’s playing starters’ minutes. Beyond catching and finishing, consistency, defensive rebounding, and avoiding foul trouble are all high on the laundry list of necessary improvements for the sophomore big.

Aubrey Dawkins’ efficiency numbers aren’t all that far off from his stats in Big Ten play last season. He shot 51% on twos and 48% on threes in league games last season and is at 61% on twos and 41% on threes this year. But for some reason he just seems to lack some of that confidence that he showed late last year.

Dawkins hasn’t lived up to his reputation as Michigan’s most-improved player over the offseason, but he has a real chance to grow into an impact player off the bench if he can hit open shots and improve his defensive consistency.

For two games in the Bahamas, Moritz Wagner looked like a future star as he racked up 26 points on 11-of-13 shooting in a pair of victories. Since returning to the mainland, he’s failed to take the next step. Wagner has as many turnovers (7) as made shots (7) since the Battle 4 Atlantis and his playing time has been spotty at times.

There’s little question that he has a higher ceiling than Michigan’s other big men, but he’s struggled to make consistent winning plays rather than trying to do too much.

Before the season, we questioned where Abdur-Rahkman would fit in the rotation with Walton, LeVert and Albrecht chewing up so many minutes. Now with Albrecht sidelined for the rest of the season, it has become clear: Abdur-Rahkman will play the primary minutes backing up Derrick Walton and Caris LeVert.

Abdur-Rahkman can defend in one-on-one situations and is effective attacking the basket for himself. The two question marks with his development are his ability to hit open threes (up to 35% after making 5 of his last 9) and distribute the ball (6 assists in the last four games).

Donnal started Michigan’s first three games and then earned a DNP-CD in Michigan’s first game in the Bahamas. He’s shown some flashes of good play — late against Texas, vs. NKU and vs. Bryant — but he’s also struggled mightily at times. He appears to be third in Michigan’s big man rotation as things stand now and somewhat surprisingly actually has the best defensive rebounding rate among Michigan’s five men.

Chatman rebounds as well as anyone on Michigan’s roster, he’s making more twos this year (59%), and he’s a plus-passer at the four position. But he’s Achilles’ heel continues to be his tendancy to be whistled for fouls (6.2 per 40 minutes) and his inability to hit threes (2-of-16 on the year). There are minutes available to backup Irvin, but Chatman’s inability to provide steady and consistent minutes could be a factor in giving DJ Wilson more of an opportunity.

DJ Wilson faded out of Michigan’s rotation at the five spot and missed two December games due to ankle injury. In a purely statistical sense, there are bright spots on Wilson’s resume. He’s shooting 63% on twos and 50% on threes in limited attempts and he’s Michigan’s best shot blocker. It’s still hard to figure out his role going forward as he’s a tweener between the four and five spots. Most recently, Beilein implied that Wilson might be in more competition for Zak Irvin’s backup minutes than minutes at the five.