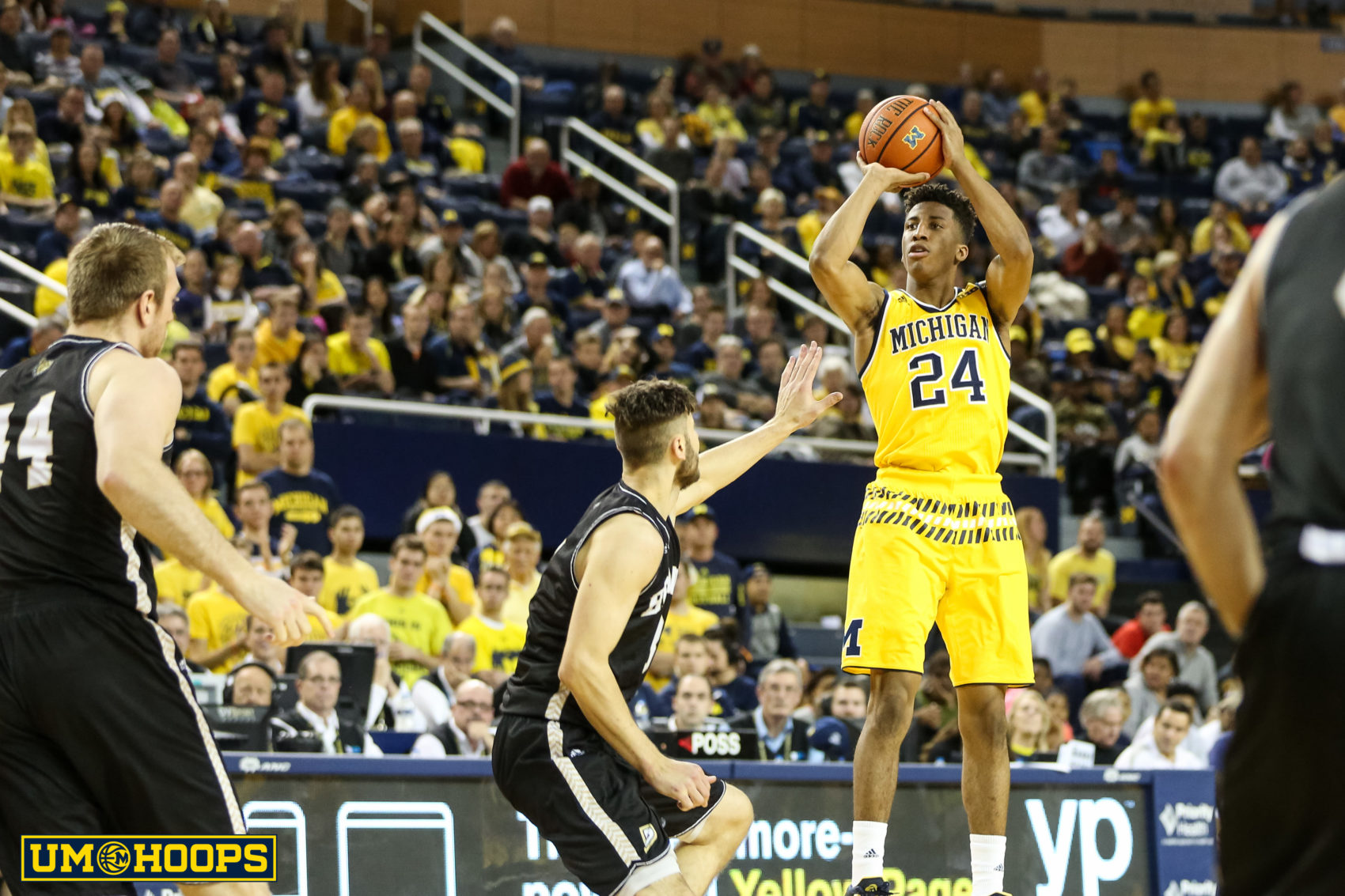 Welcome to our Big Ten Power Rankings where we examine the conference on a weekly basis and attempt to rank all 14 teams while providing a few nuggets of insight and analysis. This week we look at the best non-conference victories, Jarrod Uthoff, Nigel Hayes and Michigan’s backloaded schedule.

Welcome to our Big Ten Power Rankings where we examine the conference on a weekly basis and attempt to rank all 14 teams while providing a few nuggets of insight and analysis.

Michigan State is the best team in the Big Ten and it has the quality wins to prove it. The Spartans don’t just have the two best non-conference wins in the Big Ten this season, they own a league-best four of the top 15.

We compiled all of the games played by Big Ten teams this non-conference season and weighted road games at 125%, home games at 75% and neutral games at 100% and then percentile ranked the resulting ranks of defeated teams. The exercise leaves little double as to who the top two teams are in the conference and makes it easy to give Michigan State the nod.

Purdue has the best defense in the Big Ten because of its ability to force opponents into difficult two-point attempts. An impressive 42% of field goal attempts against the Boilers are mid-range jumpers and Boiler opponents make just 26% of those attempts. Only Duke and California have allowed a worst percentage on mid-range twos and only Marshall, Middle Tennessee and Tulane have forced more. Purdue does a good job defending the rim, but it leads the country in effective field goal percentage defense (38.1 eFG% allowed) because it rarely even lets opponents get to the basket.

Maryland was a fairly average offensive team last season, ranked 58th in adjusted offensive efficiency, but appears to have made major strides on that side of the ball this season. The Terps are suddenly an elite shooting team, making 61% of his twos and 41% of his threes for a 61.2 effective field goal percentage — third in the nation. Maryland has a tough draw in the Big Ten scheduling lottery, but appears to be one of the three teams that has a legitimate shot at making a run at the Big Ten Championship.

If you ask the average Big Ten fan to list their All-Big Ten team right now, some might forget Jarrod Uthoff. That would be a mistake. Uthoff is a skilled scorer and at 6-foot-9, 221 pounds he’s a true inside, outside and mid-range threat. He’s shooting 54% on twos and 46% on threes while making 83% of his free throws. He’s also a top-five shot blocker in the Big Ten.

Uthoff is a plus-finisher at the rim (73%), but he’s also the Big Ten’s best mid-range shooter. 42% of his shot attempts are mid-range jumpers and he connects at a 54% clip, scoring 33 points above expectation per 100 mid-range jumpers. We’ve harped on Indiana’s shot selection in the past and it keeps on working. The Hoosiers are the second-best shooting team in the country with a 62.5 effective field goal percentage. Only Michigan and Northwestern score a higher percentage of their points from behind the arc and Indiana has a multitude of three-point shooting options. Inside the Hall points out that three Hoosiers are shooting better than 50% from behind the arc and three more are better than 38%.

The Wolverines have fell flat in three of their biggest games this season, losing to double-digits to SMU, UConn and Xavier, and will have to make their mark in January.

Michigan was given a backloaded conference schedule as six of its first nine games are against teams ranked outside the KenPom Top-100. There’s a brutal three game stretch — at Purdue, Maryland, at Iowa — wedged in the middle, but overall the league slate is far more forgiving in the first half.

It won’t be easy to make up ground in the second as just one game is against a team outside the top-100 and the remaining eight are against top-55 opponents.

Many were ready to write off Ohio State after the Buckeyes were blown out by 20-points against UConn on December 20th and fell to 4-5, but Thad Matta’s group has shown some resilience. The Buckeyes strung together four wins in a row including an impressive win over the Kentucky Wildcats at the Barclays Center.

Defense is the name of the game for Ohio State, which has the third-best defensive unit in the league. The Buckeyes are undefeated when holding opponents under a point per possession (9-0), but turnover woes on the offensive end continue to plague them offensively. Ohio State hasn’t proven it can win a shootout as it is 0-5 when its opponents manage a point per trip.

The big news out of Evanston is that Alex Olah is sidelined indefinitely with a stress fracture in his foot. Olah had been playing great basketball, he was averaging 13 points and seven rebounds per game while shooting 64% on twos, and the loss strings for the 12-1 Wildcats.

Northwestern has plenty of wins on its resume, but it lacks the quality at the top. The Wildcats best win this non-conference season was at Virginia Tech (8-4, 117th nationally) and they played only one team in KenPom’s top-100 and still needed three overtimes to reach their 12-1 record. Bo Ryan is out and Greg Gard is in, but the bigger issue is what has happened to Nigel Hayes? Hayes clearly misses playing alongside Frank Kaminsky and Sam Dekker and he’s struggled offensively this season. He’s still getting to the free throw line, crashing the offensive glass and has improved his passing ability, but he can’t hit a shot. Hayes is shooting 41% on twos and 31% on threes this season and is one of the worst mid-range jump shooters in the Big Ten.

Illinois has been dealt a tough hand with injuries. Big man Mike Thorne out for the season, Leron Black is out indefinitely, Tracy Abrams is also out for the season and Kendrick Nunn missed five games during non-league play.

Penn State’s schedule follows an opposite trajectory of Michigan’s. The Nittany Lions play 10 of their first 11 games against top-60 opponents with four sub-100 games in the final seven. Pat Chambers’ team hasn’t beaten a team ranked better than 115th this season and will likely face an uphill climb early on in league play, starting with a two-game road trip to Maryland and Michigan.

Nebraska hasn’t won consecutive games since Thanksgiving and that’s a troubling sign in non-conference play. Six of the Huskers’ eight wins have been over teams ranked 300th or worse by KenPom and they also have five losses including a December 20th home defeat against Samford.

Shavon Shields is great, Andrew White was a nice addition as a transfer and Glynn Watson has the makings of a very good point guard, but for the fourth year in a row Miles looks to have one of the conference’s bottom-half offenses.

Richard Pitino came to Minnesota with a (limited) reputation as a defensive coach. He was supposed to bring a pressing and aggressive style of defense to Minneapolis, but it just hasn’t worked. Minnesota’s defense has taken a step back each year under Pitino. The Gophers were ranked 82nd in adjusted defensive efficiency in 2014, 106th in 2015 and are ranked 219th as they enter Big Ten play with a 6-6 record this season.

If you trust KenPom, Rutgers is the worst major conference basketball team in Division I. The Scarlett Knights enter league play ranked 261st nationally. For those of you comparing to Michigan’s non-conference schedule, that wedges the Scarlett Knights somewhere worse than Youngstown State and better than Charlotte. The Wolverines beat those teams by an average of 57 points.