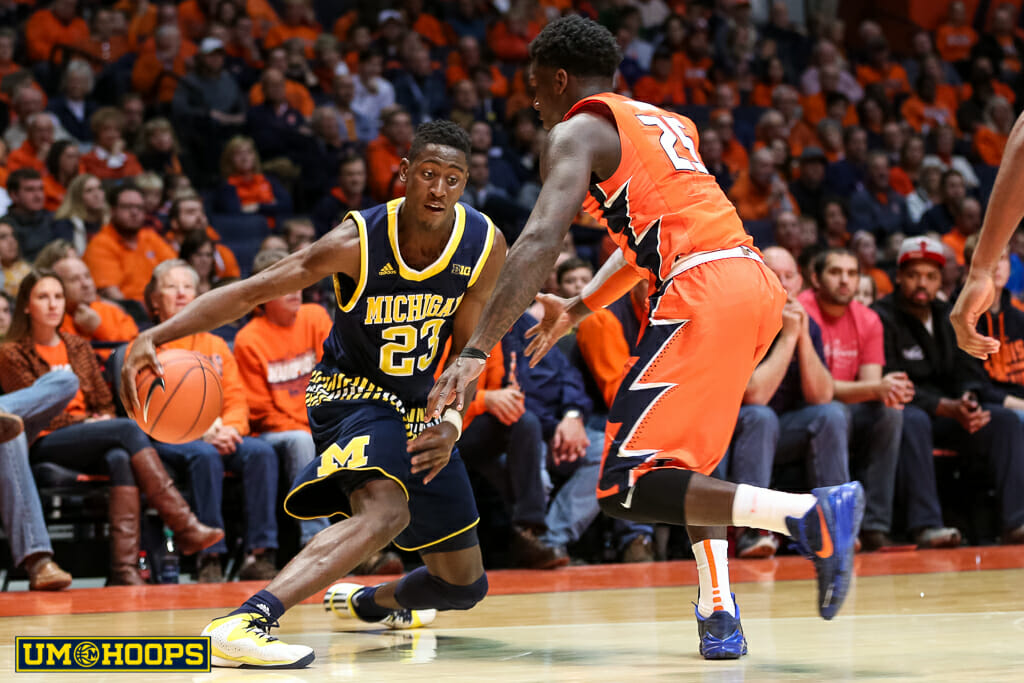 It wasn’t the toughest road game on Michigan’s schedule, but there are no bad road wins in the Big Ten.

The Wolverines rode a career-high 26-point, nine rebound performance from Mark Donnal and a dominant, yet seemingly routine, 22 point, 10 assist outing from Caris LeVert to their first win of the conference season.

It wasn’t the toughest road game on Michigan’s schedule, but there are no bad road wins in the Big Ten.

The Wolverines rode a career-high 26-point, nine rebound performance from Mark Donnal and a dominant, yet seemingly routine, 22 point and 10 assist outing from Caris LeVert to their first win of the conference season.

If Michigan is the team that it wants to be, it should have beaten Illinois soundly. After a few first half jitters it did just that in the 78-68 victory. For a team that lost its final five Big Ten road games last season it had to feel pretty good to open the season with a win at Illinois.

There was no secret adjustment at halftime, the Wolverines just started doing the things they usually do. The one thing that you can count on about this team is that it will value the basketball and hit open threes. Michigan fixed its turnover woes (14% in the second half vs. 27% in the first) and started hitting threes (7-of-14 in the second half vs 3-of-10 in the first).

Mark Donnal’s play was arguably the most encouraging aspect of the game. He finished drop-off pass after drop-off pass from Caris LeVert and even stepped out for a three. His four offensive rebounds were also helpful in a game where neither team generally goes after second chances. The Wolverines outscored the Illini 13-8 in second chance points on the night. Much will be made about three-point shooting in this game, but Michigan made 18-of-29 shots at the rim in addition to its 10-of-24 long range shooting.

It’ll still be interesting to see how this front court plays against much better opponents because the Illini interior defense is going to be one of the worst in the league. Michigan doesn’t need much from the five-spot other than: catch, finish, box out and make help side rotations on time. Donnal did all four of those things today and was a primary reason the Wolverines were able to pull away.

The numbers say that Michigan’s defense was pretty good, holding the Illini to their worst offensive output of the season and below a point per possession, but there were still plenty of red flags. The Wolverines’ pick-and-roll defense wasn’t great and they lost Finke several times in the pick-and-pop action, he just missed those open chances (1-of-5).  But the biggest problem with Michigan’s defensive effort was one that we’ve seen all year: tracking and closing out on shooters. Jalen Coleman-Lands and Kendrick Nunn hit 7-of-15 three-pointers and had a ton of open looks.

Michigan’s defense also turned out to be a lot better when its offense didn’t leave it at a disadvantage. The Wolverines were outscored 14-4 in points off turnovers in the first half, the majority of which were live ball run-outs which led to layups or open threes. In the second half, Michigan stopped giving the ball away and points off turnovers were a net even at 4-4.

Also on the positive side of the ledger, the Wolverines defended well on the interior against the Illini. Illinois made just 10-of-19 shots at the rim (53%) and Michigan dominated the defensive glass, rebounding 82% of Illinois’ misses on the night. Illinois is the worst offensive rebounding team in the Big Ten, but it was still nice to see the Wolverines clean up and push the tempo.

Next up is a Penn State team that is giving Maryland everything that it can handle in College Park as I write this recap. The Nittany Lions are known for their sound interior defense and mediocre shooting ability, but play a tough, slow-tempo physical style of basketball that could test the Wolverines.