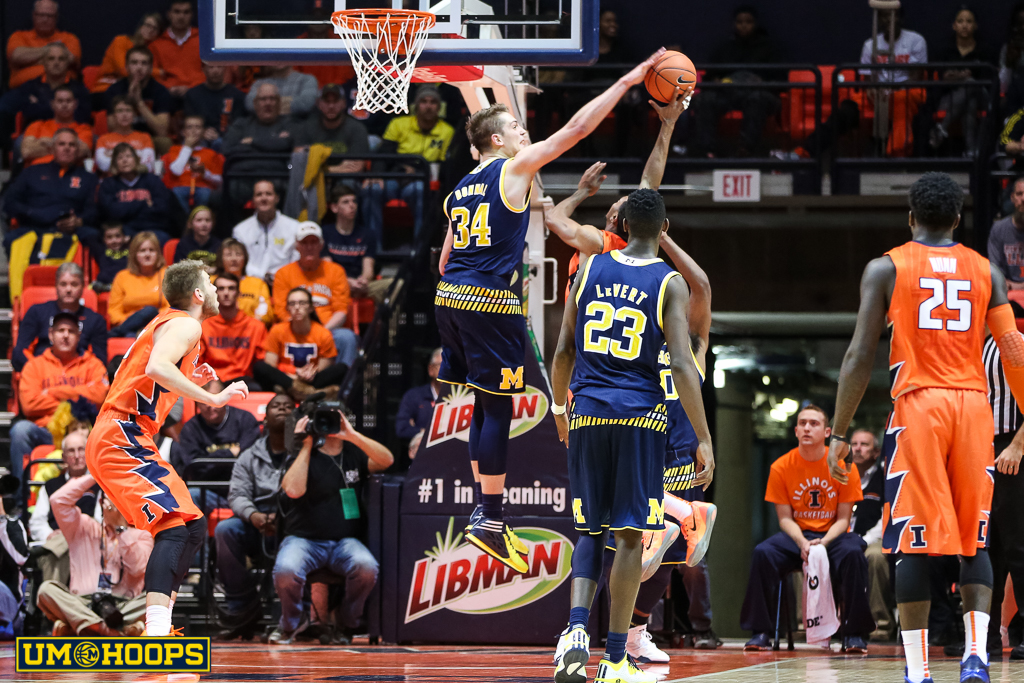 “We’ve been seeing him make progress, for some reason when people get on that scout team they just play,” said Michigan coach John Beilein. “He was picking-and-popping, knocking them down, going after the backboard.

“I just told him before the game, ‘You’ve had four hours (in practice) to prove that you can play in this game and you did.’ That’s the mentality I want our guys to have.”

Just a couple of weeks ago, it would have been almost unfathomable for Mark Donnal to play 26 minutes in a game, let alone rack up 26 points.

But in Michigan’s Big Ten opener at Illinois, the junior forward took his turn as the hero, tallying career highs with 26 points, nine rebounds and three blocks in the 78-68 win.

“We’ve been seeing him make progress, for some reason when people get on that scout team they just play,” said Michigan coach John Beilein. “He was picking-and-popping, knocking them down, going after the backboard.

“I just told him before the game, ‘You’ve had four hours (in practice) to prove that you can play in this game and you did.’ That’s the mentality I want our guys to have.”

The breakout performance was not only a career game for Donnal, but possibly a career-saving one.

The Wolverines’ frontcourt had struggled too much to eliminate Donnal from the rotation entirely, but opportunities to see game action — let alone chances to contribute as more than just a role player — had become as thin as ever.

The most experienced and talented big man in practice, Donnal began the season as the starter. But after struggling in two blowout wins, then falling completely flat against Xavier to the tune of 0 points, one rebound, one turnover and four fouls in six minutes in just the third game of the season, his minutes plummeted.

Suddenly, double-digit minutes were a rare sight, and even garbage time was not a sure thing. For the second season in a row, Donnal lost the starting job down low.

“It’s the same thing with Ricky, DJ and Moe, let’s see what they can do,” Beilein said a month ago in the Bahamas following a loss to UConn in which Donnal went from starter to DNP-CD. “Mark has had 235 practices and a whole bunch of games, he’s had good opportunities to go get more.

“I think we’ll go to nine and measure where it is and then take a benchmark two or three weeks from now.”

As Donnal’s minutes fell toward the end of November, his redshirt sophomore status was also dropped. A move that implied, serious conversations between Donnal and the coaches ensued about earning his scholarship and being on the team for a reason.

In just a matter of weeks, Donnal had fallen from the future of Michigan big men to an afterthought.

“Everybody has to earn everything”

Despite the regression, Donnal still had as much, if not more talent than any of the forwards. And with his legacy at Michigan in jeopardy, the forward began to recognize that in practice.

“Everybody has to earn everything,” Beilein said. “Everybody that you see play in games earned that opportunity, and now Mark is really understanding as a third-year guy … that (recognition that) ‘I have to earn that playing time. Coach isn’t changing until I show what I can do in practice.’ ”

Added Donnal two weeks ago: “In practice I’m just trying to build confidence, every good stretch of practice helps me out … One thing you can control is attitude and effort, and those are the two things I’m trying to bring.”

In part due to freshman Moritz Wagner’s struggles and in part due to his performance in practice, Donnal’s chances in games increased. The junior scored 11 points against Youngstown State, and added seven points and six rebounds against Bryant.

The progress was small, but was enough to earn a chance at Illinois with Michigan struggling on the road less than eight minutes in.

Beilein didn’t know what he was going to get from Donnal when he called his name, but with every tip-in, clutch basket, offensive rebound and defensive stop, Beilein quickly realized he would not be disappointed.

“Ricky played, Moe played and then we wanted to keep him on the floor the rest of the time,” Beilein said. “The last two days after Christmas he was really good, he was just trending that way coming out of that.

“We want him to be hungry, and he was really hungry.”

Donnal played 17 in the second half as the Wolverines outscored the Illini by 13 in the final 20 minutes.  Illinois is far from the best the Big Ten has to offer on the interior, and it’s inevitable that there will be some more difficult moments against some of the Big Ten’s promising big men, but Wednesday’s performance proved that Donnal still has a role on this team.

As quickly as Donnal fell off the depth chart, he clawed his way back. Now he has earned a chance to claw through the Big Ten.