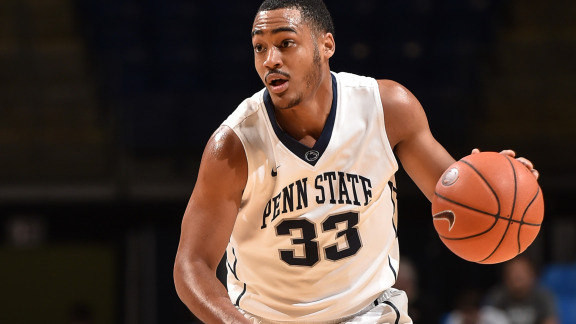 Michigan hosts Penn State (9-5, 0-1 B1G) on Saturday afternoon in its Big Ten home opener. The Nittany Lions will be the best team that the Wolverines have played at home since they lost to Xavier in mid-November, but Pat Chambers’ team is still picked somewhere near the bottom of the Big Ten.

Michigan hosts Penn State (9-5, 0-1 B1G) on Saturday afternoon in its Big Ten home opener. The Nittany Lions will be the best team that the Wolverines have played at home since they lost to Xavier in mid-November, but Pat Chambers’ team is still picked somewhere near the bottom of the Big Ten.

The Nittany Lions haven’t beaten a top-100 team this season, but they’ve been close of late, falling to Colorado by one at a neutral site and giving Maryland everything in could handle in College Park on Wednesday. Penn State led by double-digits in the second half before letting the Terps slip away with a six point win thanks to a monster 39-point outing by freshman Diamond Stone.

Penn State boasts a top-100 defense and an offense that struggles to score. The Nittany Lions are ranked 173rd in adjusted offensive efficiency and 83rd in adjusted defensive efficiency. They’ve managed to score 1.1 points per possession or better in just two games this season — for comparison, the Wolverines have topped that margin nine times and average 1.19 points per possession. Penn State’s offense struggles because it can’t shoot. The Nittany Lions shoot just 47.1% on twos (215th) and 30.5% on threes (294th) for a 46.6 effective field goal percentage (267th). The Nittany Lions aren’t the worst shooting team in the Big Ten (that distinction surprisingly belongs to Wisconsin), but they are only a few tenths of a percentage away from that dishonor.

While Penn State doesn’t shoot it well, it does just about everything else well enough to give itself a fighting chance. The Nittany Lions only give the ball away on 16.5% of their offensive possessions (58th), are ranked 144th in offensive rebounding and 148th in free throw rate.

This isn’t a Penn State team that will beat itself, but it’s a team that generally has to scrap and claw for every made basket. Penn State’s defense is constructed from the inside-out. The Nittany Lions hold opponents to just 41.9% two-point shooting, good for 23rd in the country. Penn State’s shot-block happy approach to defense also yields plenty of free throws for the opposition. PSU opponents are attempting 44.1 free throws per 100 field goal attempts (304th) and Maryland managed a free throw rate of 67% in the Big Ten opener. The Nittany Lions don’t force many turnovers with a defensive turnover rate of 18.2% and they allow opponents to grab a fairly pedestrian 30%of their missed shots.

Brandon Taylor is the highest usage player in the Nittany Lion offense. The 6-foot-6 senior accounts for 29.2% of Penn State’s offensive possessions and shoots 48% on twos and 36% on threes — both percentages slightly above his career averages. Taylor has been getting to the free throw line more often this season (42 FTA per 100 FGA) where he shoots 68%.

Sophomore point guard Shep Garner shows a lot of promise for the Nittany Lions. He’s shooting 41% from three this season with over half of his attempts from long distance, but is connecting on just 38% of his attempts inside the arc. He had 17 points at Maryland in the opener and despite leading Penn State in assists, his 2.6 dime per game average points toward him being much more of of a scorer than a distributor at this juncture.

PSU’s third double-digit scorer is 6-foot-6 sophomore Payton Banks, who plays the wing alongside Taylor. At 220 pounds, Banks is a good rebounder and is a plus-finisher inside the arc at 52%, but his three-point shot hasn’t quite developed yet as he hits only 25% from long distance.

7-foot-1 senior Jordan Dickerson anchors the middle and is one of the premiere shot blockers in the country with a block rate ranked 11th nationally. He’s also a plus-offensive rebounder, but his involvement in the offense is limited as he’s made just 13 of 26 2-point attempts.

Donovon Jack, 6-foot-9, 210 pounds, provides additional minutes on the block. Jack is a senior who shoots 49% on two-point attempts and will occasionally step out and attempt a three (3-8 this season). He’s just a 48% free throw shooter, but is a solid rebounder or both ends of the floor.

Josh Reaves is the lone freshman in the starting lineup and he appears to be Penn State’s best defender. The 6-foot-4 guard is ranked nationally in steal and block rate, but his offensive numbers are underwhelming. Reaves shoots just 45% on twos and is just 3-of-29 from three-point range this season.

KenPom likes Michigan by a score of 71-60 in a methodical 63 possession game, giving the Wolverines an 86% chance of moving to 2-0 in league play. What Penn State lacks in offensive skill, it makes up for in toughness and, as Maryland learned on Wednesday, this won’t be an easy game for Michigan, even on its home floor.

Michigan needs to take care of business at home before a difficult stretch that features road trips to Purdue and Iowa with a home game against Maryland sandwiched in the middle.