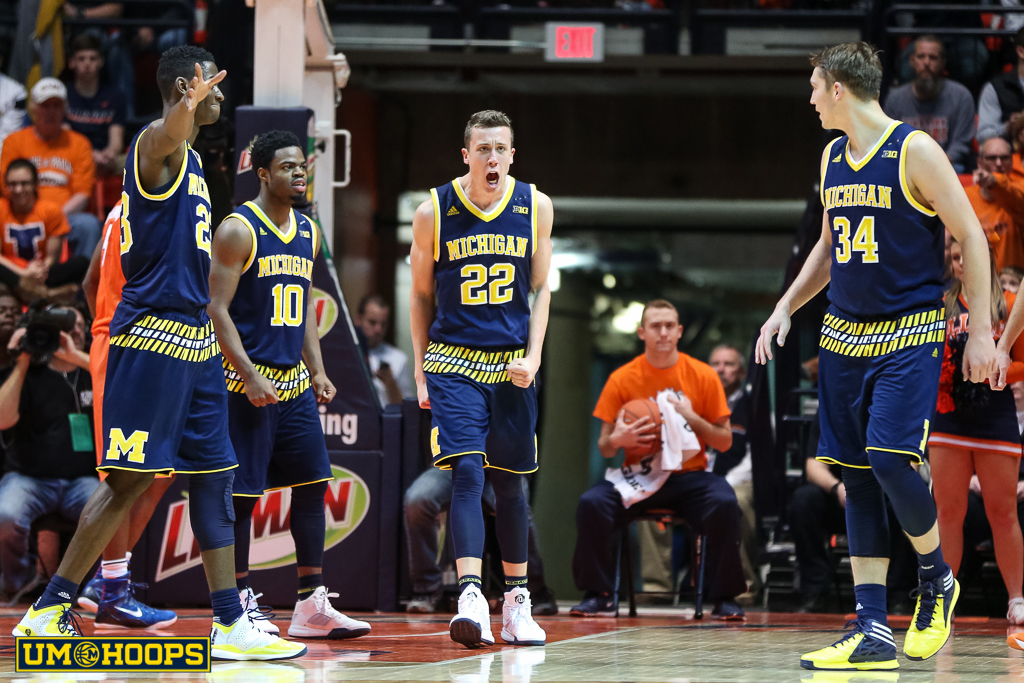 Welcome to our Big Ten Power Rankings where we examine the conference on a weekly basis and attempt to rank the conference and provide some insight about each team. This week we look at Michigan’s three-pointer dependency, Melo Trimble’s pick-and-roll prowess and more.

There might not be a better week for a Big Ten team than Iowa’s first week of the 2015-16 season. The Hawkeyes beat two of the three teams that most expected to win the league as they took down Michigan State at home and then went on the road to knock off Purdue, coming back from a 19-point deficit late in the first half.

Iowa’s offense scored 50 points in 34 second half possessions at Purdue for an incredible 1.47 points per possession against a Purdue defense that’s ranked first nationally in adjusted defensive efficiency.

Melo Trimble is the best point guard in the Big Ten and he’s the best ball screen creator in the conference. Trimble averages over 11 ball screens per game (plays ending in a ball screen or pass out) and scores 1.26 points per possession in those situations, according to stats from Synergy Sports.

Only Bryant McIntosh executes more ball screens (almost 14) per game than Trimble and no one in the conference who runs at least three ball screens per game is as efficient as the Maryland lead guards.

Tom Izzo reported on Monday that Denzel Valentine should be back within a week and it’s tough to judge the Spartans with Valentine on the sidelines.

The three-point shot has disappeared from the Michigan State offense without the Player of the Year candidate in the rotations. Michigan State made three triples in a loss to Iowa and four triples in a win at Minnesota (the lowest number of made threes by any team in a Big Ten win this season).

Expect those numbers to shift back to their non-conference norms when Valentine’s three-point shooting and passing prowess returns.

Is it time to start worrying about Purdue’s offense? The Boilermakers managed just .96 points per possession in their first two league games, shooting 45.1% on twos and 34.2% on threes for a mediocre 47.2 effective field goal percentage. The bad shooting is one thing, but Purdue also turned the ball over on 23.2% of its offensive possessions in its first two games, worse than everyone in the league other than Indiana.

There’s no doubt that Isaac Haas, AJ Hammons and Caleb Swanigan have the size and strength to push around any opposing front line, but does Purdue have the point guard play and perimeter shooting required to reach its ceiling?

Michigan doesn’t have the most impressive wins in the conference yet, but it has the most style points. The Wolverines picked up a straight forward road win at Illinois and followed that up with a thrashing of Penn State.

The three-point shot is nothing new for Michigan under John Beilein, but this group has been scorching the nets as well as any Beilein team. Michigan shoots more threes than any other team in the Big Ten yet still manages to shoot a better percentage than everyone other than Indiana.

Indiana is turning the ball over on a quarter of its offensive possessions through two games yet still boasts the league’s fifth best offense. While Rutgers and Nebraska aren’t the best the Big Ten has to offer, there’s no shame in starting the season with a pair of Big Ten road wins without your No. 2 scorer. The season-long adjusted efficiency numbers already say that Indiana has the best offensive team in conference, but you get the feeling that the turnovers will be the deciding factor as to whether this Hoosier team is great or almost great.

Don’t look now, but the Buckeyes have won 8 of their last 9 games. The 2-4 start still happened, and the Buckeyes are still 1-5 against the best six teams they’ve played, but they handled business at home against Minnesota and Illinois. This week should be interesting for an Ohio State team that has built its Big Ten offense on getting to the free throw line (57 FTA/FGA in B1G) and its defense on defending the rim (39.7% allowed on two-point attempts). The Buckeyes head on the road to Northwestern and Indiana, two of the better offenses in the country.

The Badgers are connecting on those shots at just a 32% clip, tied for 11th worst of the 100 major conference teams tracked by Shot Analytics.

It feels like everyone is rooting for Northwestern to make the NCAA tournament, but the Wildcats have yet to beat a KenPom Top-100 team this season. In what felt like a prime chance against a Maryland team that is notorious for playing close games, the Wildcats fell flat on their face in a 72-59 home loss. Northwestern hosts Ohio State on Wednesday in their best chance yet for a solid victory.

Illinois has two of the Big Ten’s best scorers in Malcolm Hill and Kendrick Nunn, but injuries to the frontcourt might be too much to overcome. The Illini rank 8th or worse in offensive rebounding, defensive rebounding, two-point shooting and two-point defense after two Big Ten games.

Penn State came tantalizingly close to the best win of its season in back to back weeks, first against Colorado in Las Vegas and then at Maryland in the Big Ten opener. After falling shot in both opportunities and playing their fifth consecutive game away from State College on Saturday, they finally ran out of steam and were drubbed by Michigan’s high-octane offense in Ann Arbor.

A week long home stand will be a relief for Penn State, but the Nittany Lions won’t be getting comfortable at home anytime soon. After two games at home, five of Penn State’s next six are on the road — including a game at Madison Square Garden that should have been a Nittany Lion home game.

Between December 19th and January 3rd, the Nittany Lions will play just three games at home and 10 games at road or neutral sites.

Nebraska’s 1.19 points per possession in its Big Ten opening loss against Northwestern might be one of the best offensive performances in a losing effort this season, unfortunately allowing 81 points in 60 possessions to Northwestern on your home floor might go down as one of the worst defensive performances of the season. Despite playing its first two games at home, Nebraska has allowed a league-worst 1.23 points per possession in its first two league games.

Since beating Clemson in the Big Ten-ACC Challenge, Minnesota has lost six of its last seven games. Pitino’s Gophers have been abused inside the arc on both ends of the floor. They are shooting just 37.6% on two-point attempts and allowing opponents to shoot 56.4% inside the three-point line.

What is there left to say about Rutgers? The Scarlet Knights are ranked 248th by KenPom and his metrics give the Knights better than a 10% chance of winning in only one of their next seven games.