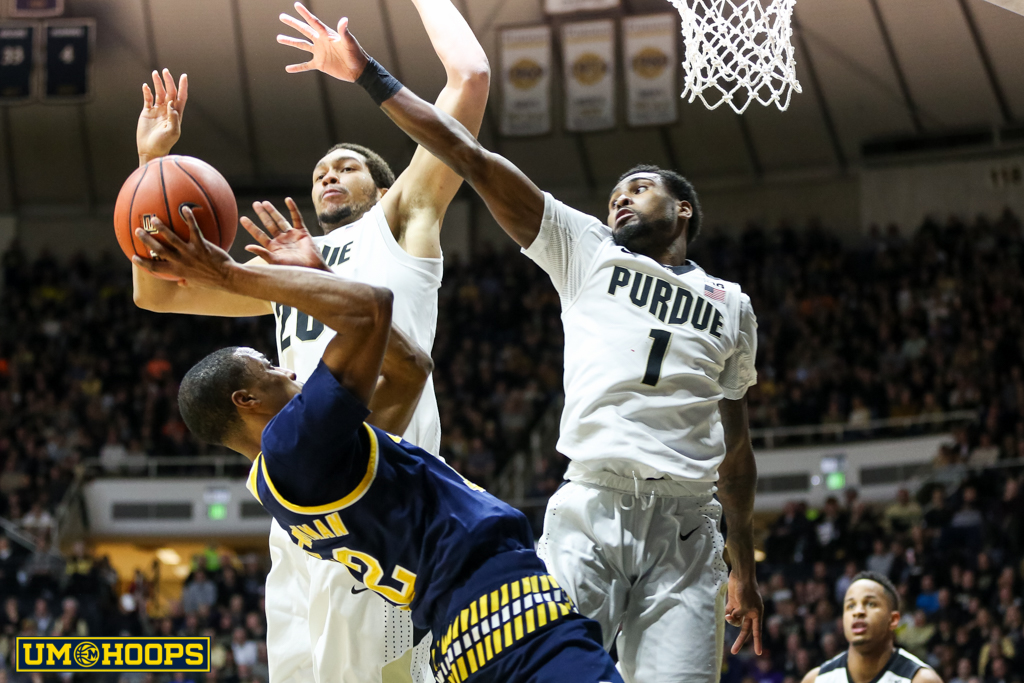 Michigan scrapped and clawed its way through a grinding first half in West Lafayette, but eventually Purdue’s size and strength wore down the Wolverines.

Michigan scrapped and clawed its way through a grinding first half in West Lafayette, but eventually Purdue’s size and strength wore down the Wolverines.

Purdue posted a 92.8% effective field goal percentage in the second half, shooting 9-of-11 on two-point attempts and 7-of-10 on three-point attempts in the final frame. The Wolverines tinkered with the 1-3-1 zone, token zone pressure and a 2-3 zone, but just couldn’t find the answers defensively.

In a season that has already had a few disappointing defensive performances, this was Michigan’s worst. The Wolverines allowed 1.29 points per trip for the game despite holding Purdue to just a 24% offensive rebounding rate — a statistic boosted perhaps because there just weren’t many misses to grab.

Michigan’s offense just topped a point per possession at 1.04 points per trip, but it had to work for every single basket. About the only thing that really seemed to work for the Wolverine offense was to isolate Muhammad-Ali Abdur-Rahkman and hope he could convert an incredible layup at the basket. He did more often than not, finishing with a career-high 25 points on 16 shots, but Michigan needed another element offensively with Caris LeVert on the sidelines.

The pick-and-roll offense going to the hoop was eliminated by Purdue’s defense plan. The Boilers left Hammons and Haas at home, effectively giving up the pick-and-pop three to Wilson or Donnal — who finished 3-of-7 from three — and Zak Irvin and Derrick Walton failed to create anything at the rim with the shot blocker waiting for them.

The Wolverines actually shot the ball well from three — making 11-of-27 long range efforts — but just couldn’t score inside. Michigan was 9-of-18 at the rim and just 3-of-16 when shooting mid-range jumpers. Michigan shot just 36% inside the arc for the game, and players other than Abdur-Rahkman made just 4-of-23 two-point attempts on the evening.

The three is vitally important to Michigan’s offense, but the Wolverines’ success depends on whether those easy baskets exist around the rim. It should come as no surprise that the Michigan has lost in its four worst two-point shooting performances this season

Michigan was outscored 42-18 in the paint, a statistic that won’t surprise many, but perhaps the most disappointing peripheral stat of the game was in the turnover department. I wrote in the preview that the Wolverines had to force turnovers to create some easy offense, but they managed to score just four points off of nine Boilermaker turnovers. While Michigan only gave the ball away seven times in the loss, Purdue made the Wolverines pay — scoring an impressive 16 points, or 2.28 points per turnover.

The Boilermakers are a horrific matchup, especially without LeVert, but this wasn’t the step in the right direction that John Beilein’s team hoped to take after the last month of steady improvement. The Wolverines get a little time off this weekend before another marquee opponent in Maryland at the Crisler Center on Tuesday.