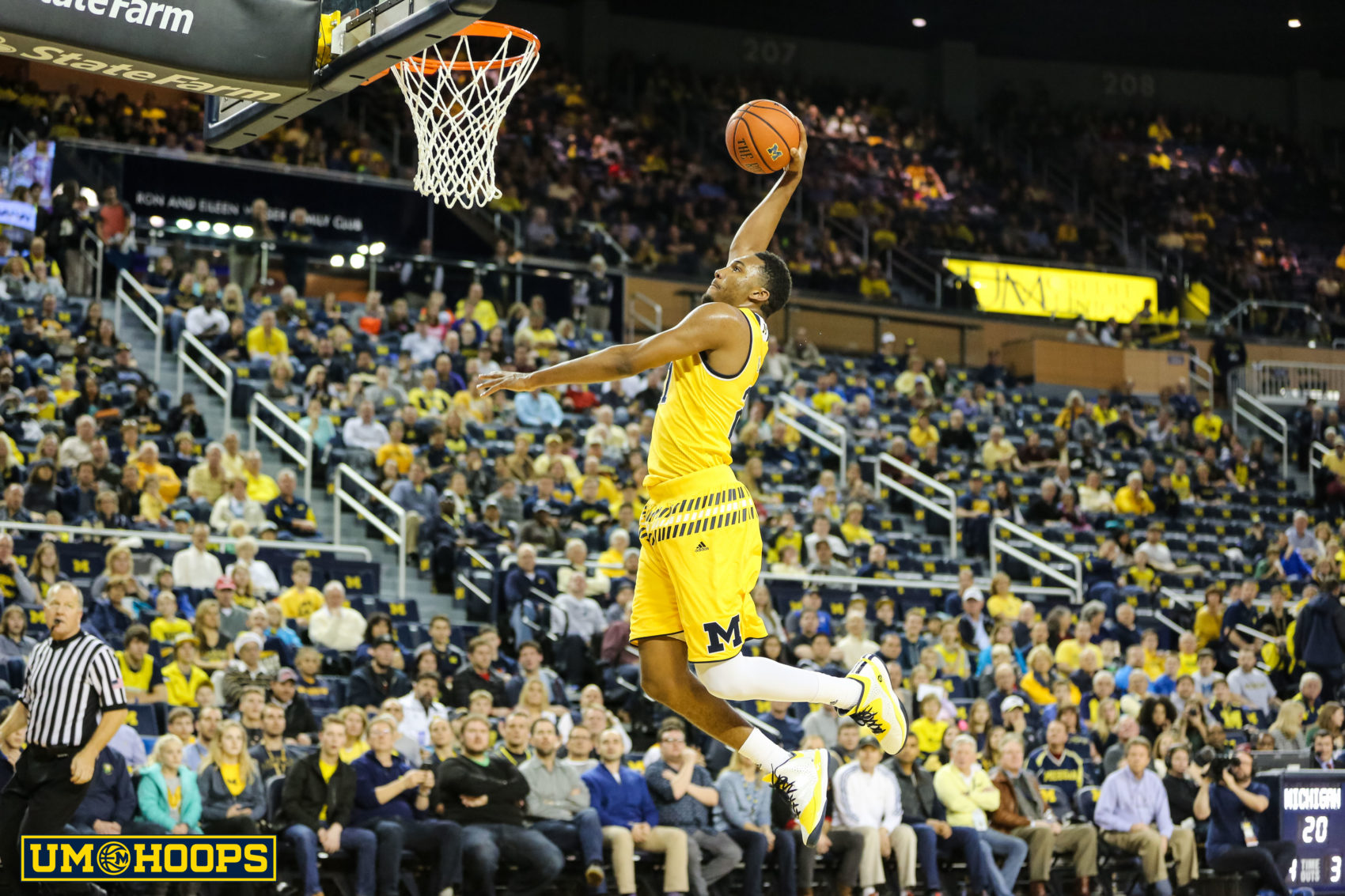 ‏@mumurthigal: Do you think Donnal sticks as the starter? Also has Zak Irvin’s rise as a passer made Kam Chatman redundant?

I don’t think it matters so much who starts at the five position and I don’t think Beilein will stop going with the hot hand to finish games. Ricky Doyle’s size inside could be more effective against some teams and Moritz Wagner’s skill could also earn him serious minutes if he gets comfortable in a few games. Either way, Mark Donnal has proven that he’s capable of catching and finishing, and even rebounding, as well as any big on the roster so I’d expect him to continue to get his chances.

Zak Irvin’s rise as a passer is great for Michigan now and next year, but I’m not sure how much it directly relates to Kameron Chatman. Chatman needs to improve offensively going forward regardless of what Zak Irvin does. He’s not going to replace Irvin in the rotation as a senior even if he improves by leaps and bounds.

Chatman is just 2-of-16 from three-point range this year and even with his plus passing ability, better shooting is going to be necessary to be a rotation-quality wing when he’s sharing a roster with Duncan Robinson, Irvin, Dawkins and other viable shooters.

WindsorBlue: How much zone are we likely to see against Purdue?

Michigan’s zone defense has been unequivocally poor, but against a team like Purdue it is certainly possible that we’ll see a few possessions because Purdue has an offense that is begging to be zoned. The Boilers have struggled with turnovers through their first two Big Ten games and could be candidates for the 1-3-1 zone. They also have such a massive size advantage that a 2-3 zone could help deal with multiple bigs.

Purdue’s offense has seen its share of zone defenses this year, facing zones on 29% of its half court possessions according to Synergy Sports. The Boilers are scoring .963 points per trip against the zone, good for the 70th percentile nationally.

The worry about going to a zone is that it makes the chore of grabbing defensive rebounds against Purdue’s towering front line even more difficult. Rebounding out of any zone, especially the 1-3-1, is generally more difficult because it is harder to find a man to box out. As we saw from Michigan against Xavier and SMU, the zone magnified Michigan’s struggles on the boards in both games.

Zone or man, the key for Michigan is going to be to avoid giving up easy dribble penetration. That was the Wolverines’ undoing against SMU and Xavier as the quicker opposing guards weaved into the lane and drew help for either an alley-oop or a wide open rebounding chance. Purdue doesn’t have a Nic Moore or Edmond Sumner on its roster, but that’s the area of the game to watch early on.

BelieveInBeilein: Using your advanced analytics, which top team would you say we have the best chance to defeat based on our strengths/weaknesses vs. there’s, during the tough upcoming stretch vs. Iowa/Maryland/Purdue.

‏@insidethehall: How many do you have the Wolverines winning out of the next three?

I’d set the over-under at one and if we’re being honest about it. I also think that one win out of three would still make for a successful two weeks for the Wolverines. Two or three wins would change the outlook of the season and make Michigan a legitimate contender in the Big Ten Championship race.

On paper, the Maryland game at home looks like the one for Michigan to steal. The Terps are notorious for playing close games and Michigan should have a great crowd on hand for a top ten opponent in Ann Arbor. Melo Trimble and Diamond Stone are still one of the best guard-big combinations in the country, but the other two games aren’t any easier.

Purdue is as tough of a matchup as there is for Michigan given its interior size and Iowa is playing the best basketball in the conference right now. Both of those teams beat Michigan emphatically on the road last season and a win at either venue would be a surprise.

Perhaps the most important element of this stretch is how Michigan reacts coming off of it. There could be a few tough losses over the next two weeks, even three in a row, but it is critical that Michigan rebounds in a stretch that features Minnesota, at Nebraska, Rutgers and Penn State in New York City. A bad loss in that stretch could create a big problem for Michigan, but wins in those four games would leave the Wolverines in a solid spot regardless of the upcoming three.

wolverheel: How big of an impact is it making to have Irvin return to his last year form of good shooting, driving, and distributing? I guess I mean that as in where does that open up other options in the offense.

Irvin’s ability to hit open threes is essential to Michigan’s offense because his threat means that the Wolverines have four long distance shooting threats to spread the floor. As a result, the middle of the floor has been wide open. Looking at Mark Donnal’s break out games, it was clear that Irvin finally finding his stroke is spreading opposing defenses even further. Irvin is also great at finding Donnal rolling to the hoop.

Irvin actually started the year doing a good job of driving and distributing, but his shot just wasn’t falling. Now that he’s starting to rediscover the total package, he’s an even tough guard — especially for opposing fours. I wrote yesterday that Irvin and Swanigan were the key to tonight’s game at Purdue as whichever one can play their style of basketball will make it very difficult for the other. Zak Irvin doesn’t want to guard Swanigan in the post just as much as Matt Painter doesn’t want to see Swanigan and Isaac Haas defending a high ball screen.

JJ3: On the whole, what is your take on the effect of the new rules overall, and on Michigan in particular?

You’ve definitely seen pace increase (D1 average is 69.8 poss/game from 64.8 last year) thanks to the shorter shot clock. I’m surprised that free throw rate is actually down a few tenths of a percent, but maybe that will even out in conference play. Offensive efficiency is up a bit overall, but I think the rules have been a welcome change — especially for a team like Michigan which wants to play in offensive games. There was a bit of an adjustment early on for Michigan to avoid fouling, but I think the new rules have had a positive impact overall both for Michigan and as a college basketball fan.