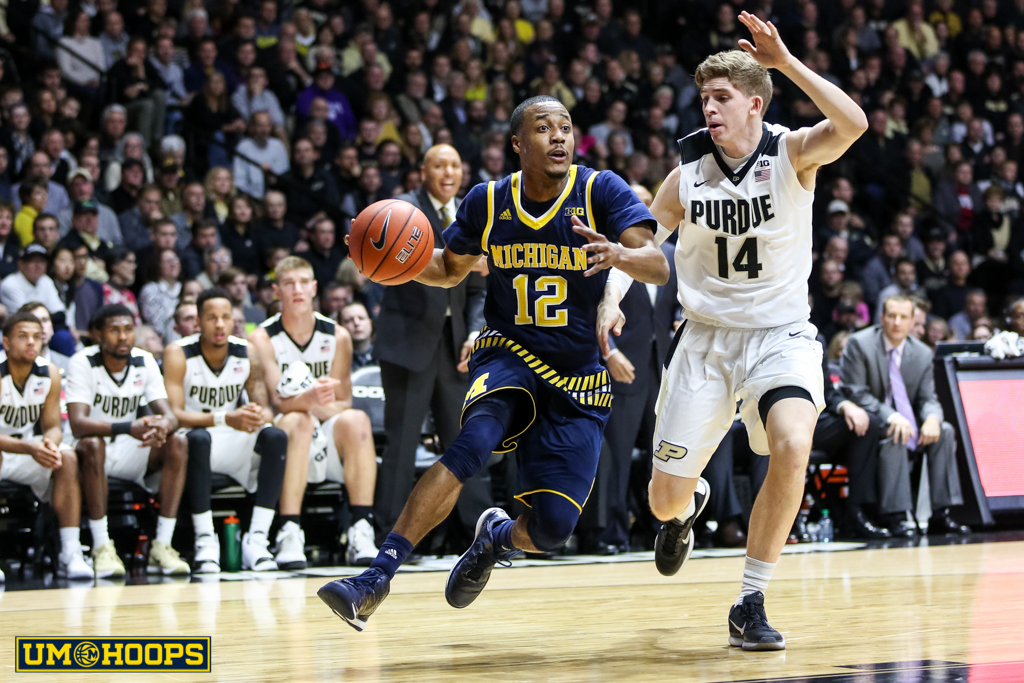 In his second start in LeVert’s absence, Abdur-Rahkman turned the jeers into fear. The Wolverines were unable to pull off the upset, but by tallying a game-high 25 points, four rebounds, two assists and no turnovers against one of the nation’s premier defenses, Abdur-Rahkman struck fear not only in the 20th-ranked Boilermakers, but Big Ten opponents everywhere.

Maybe the Purdue faithful felt the sophomore guard had too many names — “like seven,” as one fan noted — or that his hometown of Allentown, Pennsylvania signified a lack of basketball prowess. Maybe they felt that replacing the injured Caris LeVert was a laughable goal for a player averaging just 4.9 points per game.

But in his second start in LeVert’s absence, Abdur-Rahkman turned the jeers into fear. The Wolverines were unable to pull off the upset, but by tallying a game-high 25 points, four rebounds, two assists and no turnovers against one of the nation’s premier defenses, Abdur-Rahkman struck fear not only in the 20th-ranked Boilermakers, but Big Ten opponents everywhere.

“He’s got this ability,” said Michigan coach John Beilein after the game. “I call it the East Coast type of thing where he can get buckets — in the wind, in the rain, outdoor, indoor, crooked rim — He can just find ways to score. He did that today.”

In many ways, Thursday’s game went about as expected. Michigan struggled to create offense without LeVert, its leader in points, rebounds and assists, and Purdue’s stifling defense took over. The Boilermakers totaled seven blocks, five steals and 16 points off turnovers in the 17-point win.

But the nearly-inevitable blowout was put on hold for Abdur-Rahkman. The guard shot 10-of-16 from the field while the rest of the team went just 13-for-45. Using a combination of floating layups, a strong dribble drive and even a couple 3-pointers, the Wolverines’ offense ran through Abdur-Rahkman and the sophomore kept the game to within six with six minutes to go.

Abdur-Rahkman’s success also came as a surprise in how it happened. Purdue boasts two 7-footers and several players that are much bigger than the 6-foot-4 Abdur-Rahkman, but the guards inability to miss from by the basket — he went 8-for-11 from 2-point range while the rest of the team was 4-for-23 — was a game-changer.

“We were practicing a lot with the pads and things like that,” Abdur-Rahkman said. “We were prepared for the length. It was nothing new. It was just like playing in practice.”

The 25-point outburst was a promising sequel to Abdur-Rahkman’s 14-point total against Penn State Saturday. After struggling against contact and length for much of his career, Beilein feels that things are starting to click for Abdur-Rahkman on offense.

“We are making great strides in that area, but he’s probably made the best jump of when it’s game on, he really takes it at you, it’s really good to see,” Beilein said. “From last year, early in the year, anytime there was body contact he wasn’t finishing. He’s doing a great job with that.”

With the improved finish, Abdur-Rahkman became the fourth Michigan player this season to surpass 20 points.

Though the Wolverines still have plenty of moving or unfinished components to their team, Abdur-Rahkman no longer looks like one of them. And after Thursday the fans at Mackey Arena can agree with that.