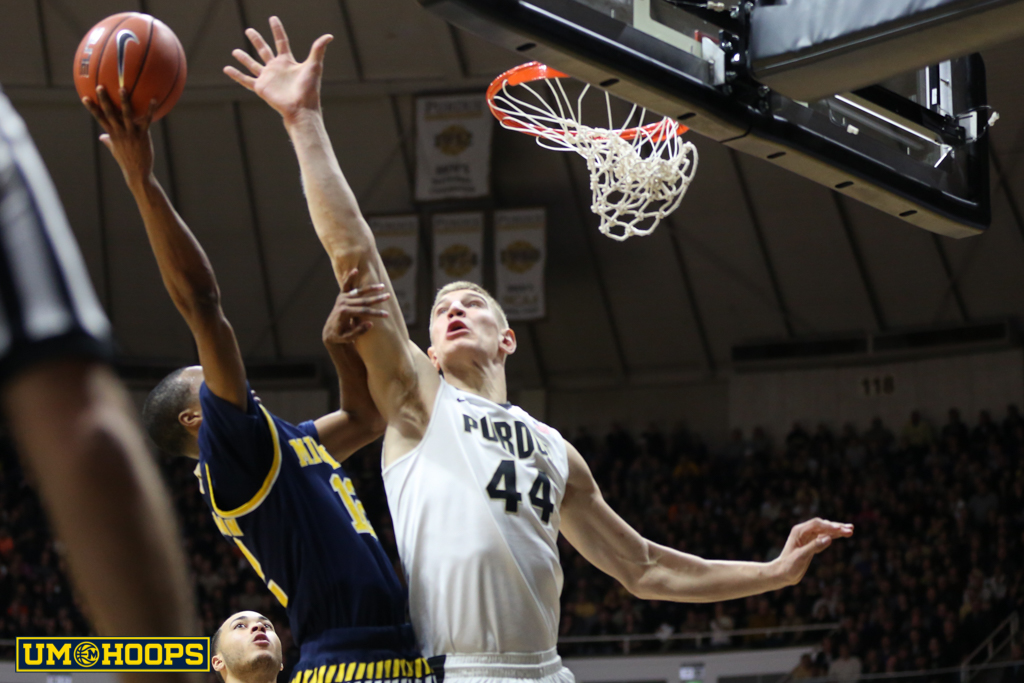 The Hawkeyes only played one game last week, an easy win over Nebraska, but they still have two of the best wins in the Big Ten this season. They’ll have to defend their top spot this week in East Lansing, but for now they still own it.

Maryland just keeps on winning close games. KenPom refers to that metric as ‘luck’, but at this point it’s anything but for the Terps. Last year’s Maryland group ranked 2nd nationally in luck — a measure of how its win-loss record out performed its per-possession scoring margin — and this year’s group is picking up where it left off.

Maryland in games decided by single digits last season and so far this season: 20-3.

Personally, I’m not a big fan of the term luck and I’m convinced that any team with Melo Trimble at the point guard spot is going to get lucky more often than not. His game-winner at Wisconsin was just another reminder why.

Michigan State had a dominant week. The Spartans outscored Illinois and Penn State by 52 points in 139 combined possessions — that’s a ridiculous .37 point per possession margin. Despite playing without All-American candidate Denzel Valentine for the first three games of league play, Michigan State leads the conference in efficiency margin and has as good of odds as anyone to take a run at the conference title.

Valentine returned to game action on Sunday and the Michigan State students will pack the Breslin on Thursday for a revenge match-up against the Iowa Hawkeyes. Win that game and Michigan State will be in great position with single plays against Maryland, Indiana and Purdue — the three other teams near the top of this week’s power rankings.

Indiana hasn’t fixed its turnover issues (the Hoosiers are giving the ball away on a league-worst 24.4% of their Big Ten possessions), but it appears that it might have learned to play defense.

Indiana has allowed .93 points per possession through four Big Ten games — holding all four opponents below a point per trip. The Hoosiers have faced their share of offensive ineptitude in Rutgers, Wisconsin and Ohio State, but the defensive improvement is still impressive from a team that gave up 1.52 points per trip to Duke and even 1.08 points per trip in its non-conference finale against Kennesaw State.

It’s still early, but as we take an early look at the Big Ten, we’re going to unveil the non-conference aerial by quadrant. The Hoosiers make the surprise appearance in the good defense, good offense quadrant.

Purdue suffered a shock defeat at Illinois on Sunday evening and sits at 2-2 in the conference. The Boilermakers’ undoing over the last week and change has been on the defensive end. The Boilers have surrendered over a point per possession in their last three games, including a blowout win over Michigan. Iowa torched Purdue in the second half and Illinois scored 1.20 points per possession on Sunday night.

Purdue still has the 2nd best adjusted defensive efficiency in the country, but the defensive woes have to give Matt Painter pause at this juncture in the Big Ten slate.

Michigan continues to be killed inside the arc in its losses this season. The Wolverines do a great job of creating easy baskets inside against inferior opponents, making 56% of their twos on the season, but against SMU, Xavier, Purdue and UConn those chances dried up quickly.

The same trends reared their ugly head in West Lafayette this week as Michigan made just 35% of its twos and Purdue scored 1.3 points per possession and shot 58% inside the arc.

“When you’re in coaching long enough, every now and then you have a game like this,” Matta said after the blowout loss. “To say it’s your worst nightmare, this was. We just didn’t have it today.”

Illinois was blown out in East Lansing without Kendrick Nunn and then bounced back with a huge home win over Purdue. Illinois has played the toughest Big Ten schedule to date and has the week off before a home game against Nebraska.

The Illini wouldn’t have been high on the list of likely opponents to take down Purdue’s massive size inside. The Illini have one of the weaker interior defenses as only Minnesota surrenders a worse field goal percentage from 5 feet and in than the Illini.

We’re two weeks into Big Ten play and Northwestern still hasn’t beaten a KenPom top-100 team this season. The wins are nice, but we need to see at least some quality on Northwestern’s resume before we slide them up the scale.

Chris Collins’ club has made incredible improvement on the glass tihs season. The Wildcats are rebounding 35% of their Big Ten misses, 2nd best in the league, and grabbing 79% of their conference opponents. Last year Northwestern ranked 13th in offensive rebounding and 12th in defensive rebounding.

A year after having the most dominant offense in the KenPom era, Wisconsin continues to find itself searching for answers on that side of the ball.

The good news for interim head coach Greg Gard is that his group has bought in on the defensive end, allowing just .94 points per possession and ranking first in forced turnover rate, defensive rebounding rate and free throw rate allowed. Single possession losses to Indiana and Maryland will sting, but that defensive prowess should keep the Badgers competitive.

Nebraska had the second worst offense in the Big Ten last year, but it has made great improvements offensively this year. The Huskers undoubtedly padded their stats over the weekend by scoring 90 points on 67 possessions at Rutgers. Right now, Nebraska is the only team in the good offense, bad defense quadrant of the Big Ten aerial.

Penn State headlines the final quadrant of our Big Ten tempo-free aerial: the teams that need a lot of help. These teams have been bad on both sides of the ball and they are emerging as the bottom group in the conference.

Minnesota has lost five in a row and 8 out of 9 and it doesn’t appear to be getting any closer to the win column.

Rutgers continues to push the boundaries of offensive ineptitude for a major-conference team. The Scarlet Knights are ranked 308th in adjusted offensive efficiency and are scoring just .89 points per possession in league play.