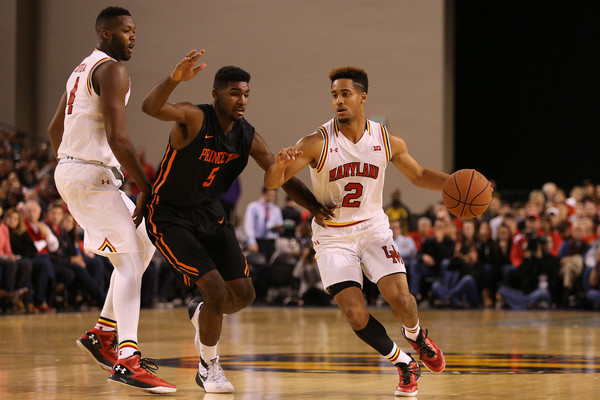 Facing the possibility of playing its third consecutive game without Caris LeVert, Michigan welcomes No. 3 ranked Maryland to the friendly confines of the Crisler Center tonight.

Facing the possibility of playing its third consecutive game without Caris LeVert, Michigan welcomes No. 3 ranked Maryland to the Crisler Center tonight.

Since a disappointing November loss to Xavier, Michigan hasn’t faced much in the form of tough competition at home and Mark Turgeon’s Terrapins will provide an opportunity for the Wolverines to secure their best win of the season in a primetime ESPN game.

Through four Big Ten games, Maryland is outscoring opponents by .17 points per possession — trailing only Michigan State in efficiency margin. The Terps survived scares against Penn State and Wisconsin, but demolished Rutgers (the key to a positive efficiency margin early on in league play) and won comfortably on the road at Northwestern.

That hot shooting in non-conference play hasn’t immediately translated to Big Ten action. The Terps are still shooting 52% on twos in league play (3rd B1G), but the perimeter stroke has been fleeting. Maryland has made just 32% of its three-point attempts (12th B1G) in conference play including a dismal 24% effort against Penn State.

Turnovers on both sides of the ball have been an issue for the Terps. Maryland gives the ball away on 20% of its offensive possessions (252nd) and forces giveaways on only 17.4% of its opponents (253rd). Those struggles have continued in Big Ten play where the Terps are ranked 11th in offensive turnover rate and 10th in defensive turnover rate. Michigan has been uncharacteristically sloppy with the ball in Big Ten play as well (10th) and isn’t great at forcing turnovers (8th), but at home as underdogs the Wolverines might need to ratchet up the pressure.

Defensively, Maryland plays a rather containing style of play that starts with not fouling. Terp opponents attempt just 25.3 free throws per 100 field goal attempts, 11th best in the country, which should result in a free throw-less game against Michigan.

The Terps’ defensive scouting report from Synergy Sports doesn’t show many obvious weaknesses. Maryland grades out in the 86th percentile in pick-and-roll defense, but isn’t quite as good defending straight isolations in the 43rd percentile.

Melo Trimble is a likely All-American and one of the best point guards in the country. He’s the best pick-and-roll player in the Big Ten, he shoots 57% on twos, 40% on threes and has an uncanny ability to draw contact and get to the free throw line. The key for the Wolverines will be to avoid fouling him as they don’t have the fouls to burn in the backcourt and try to keep him out of the lane where he can pick the U-M defense apart.

Duke transfer Rasheed Sulaimon is this week’s shooter to know. The 6-foot-4 guard is a lethal spot-up shooter and it’s absolutely vital to run him off the three-point line. Shooting 49% from three for the season, Sulaimon has kept that momentum going in Big Ten play, knocking down 46% of his triples. Closing out on shooters has been a struggle for Michigan this season and Sulaimon is the player that you just can’t lose track of defensively even if Trimble is in the lane or Stone has the ball on the block.

At the three and the four, Maryland goes 6-foot-9 across the board which is a big reason it is ranked second nationally in average height.

Jake Layman slid to the three-spot from the four last year and despite his size, he plays like a wing. Layman shoots more threes than twos, but is more efficient when he attacks the rim (64% on twos) than shoots from the perimeter (36%). He would be a matchup that Michigan wouldn’t fear that much at the four given his perimeter-oriented game, but he can present some real challenges for Duncan Robinson at the three with his size and occasional slashing ability.

Robert Carter, a junior transfer from Georgia Tech, provides a physical presence at the four spot that Maryland lacked last season. Carter shoots 64% on twos and will occasionally step out and attempt the trey, a shot that opposing defenses can live with at 29%. He’s a plus-rebounder on both ends of the floor and is also a top-ten shot blocker in the Big Ten. Despite his size and shot blocking ability, Carter grades out as below-average defensively according to Synergy Sports — especially in spot-up and isolation situations — a sign that Michigan could need Zak Irvin to have a big game from the perimeter in their head-to-head matchup.

Damonte Dodd starts at the five spot, but five-star freshman Diamond Stone is the bigger concern. Dodd is a wide-bodied post who does a good job on the glass and finishing around the hoop, Stone is a future pro. Stone has gone for double-digits in his last nine games and notoriously scored 39 points on 15 shots in Maryland’s Big Ten opening win over Penn State. He’s the 9th best offensive rebounder in the country and is also a top-100 shot blocker defensively.

Whereas well over a quarter of Purdue’s offensive possessions are post-ups, Maryland plays out of the post on only 14% of its possessions (including pass-outs). Stone leads that group and grades out in the 85th percentile, but Carter will also see his fair share of touches on the block.

Other than Stone, The Terps aren’t a particularly deep team on the bench.

Jared Nickens is a 6-foot-7 volume shooter who has struggled with his shot of late. He shot 39% on threes last season, but has made just 3-of-18 long range attempts in Big Ten games this season. Jaylen Brantley is the primary backup point guard, but he earned a DNP-CD at Wisconsin despite Trimble battling some hamstring issues. 7-foot-1 Michal Cekovsky is the third option in the post and the sophomore is a capable finisher and shot blocker.

KenPom’s projections like Michigan by a hair, projecting a 71-70 Wolverine victory. Those numbers include Caris LeVert’s production, but give the Wolverines a 52% chance of defending their home floor.