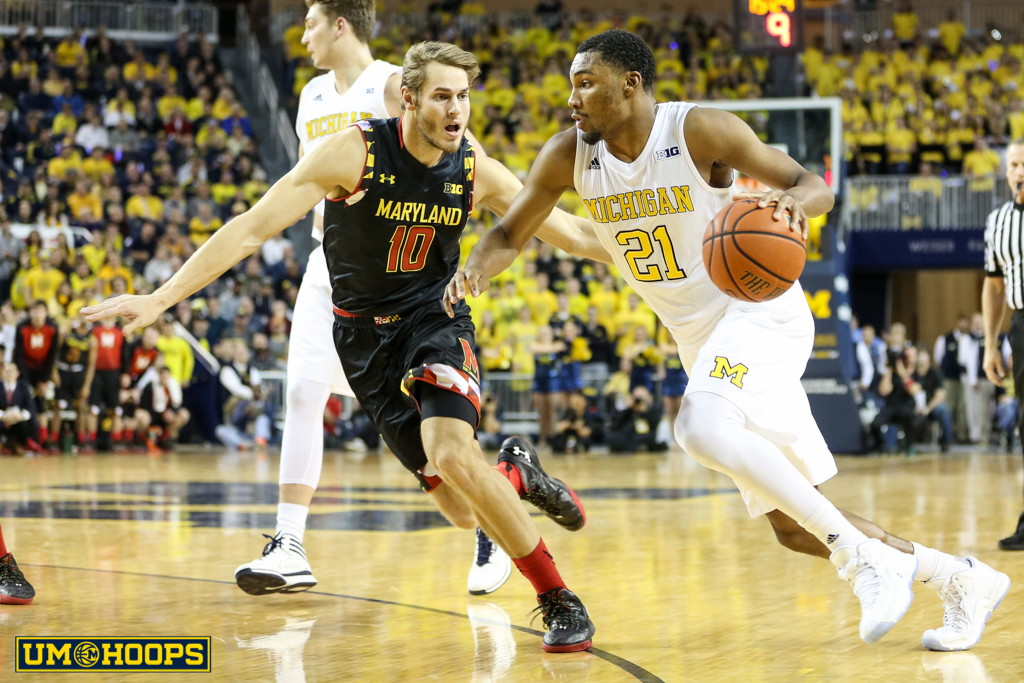 Five weeks ago, the Michigan basketball team’s junior class was a mess. On Tuesday night, they led Michigan to a statement victory over Maryland.

Five weeks ago, the Michigan basketball team’s junior class was a mess.

Point guard Derrick Walton missed games due to injury for the second time in less than a calendar year; forward Mark Donnal was far enough down the depth chart he didn’t even play in every game; forward Zak Irvin — still recovering from offseason back surgery — was shooting less than 20 percent from 3-point range while Michigan coach John Beilein admitted Irvin might not fully recover all season.

But in the Wolverines’ win over No. 3 Maryland, their first win over a tournament-caliber opponent all season, the junior class looked as good as it ever had. The trio combined for 42 points, 21 rebounds and seven assists.

For possibly the first time ever, Michigan’s three-member class of 2017 all looked like the leaders they were recruited to be, and sent a message to the rest of the Big Ten.

“This is that next step for them,” said Michigan coach John Beilein. “It was probably forced on too early for them last year they were sophomores.”

Michigan fans remember all too well the devastation of losing senior guard Caris LeVert at around the halfway mark last season, only to find that Walton, Irvin and Donnal weren’t ready to fill the void. But when LeVert went down again this season, the three stepped up. In three games since LeVert went down, Donnal, Irvin and Walton are all averaging double-digit points, and are visibly more in control of the game and its results.

“When someone goes out, I mean first (the lone other senior) Spike (Albrecht) and then Caris, we all have to step up,” Irvin said. “This game I think we all stepped up, especially this 2013 class.

“We’ve played the most minutes out of anyone on the team, so we’ve got to step up and make plays.”

“We’ve played the most minutes out of anyone on the team, so we’ve got to step up and make plays.”

All three did so Tuesday night. Walton battled a rough first half to have a nine point, six rebound, turnover-free second half en route to a 12 point, 10 rebound performance. Donnal, despite going up against strong competition in the post, clawed his way to eight points and a career-high nine rebounds.

The 6-foot-10 junior is now averaging 14 points and 9 rebounds per game in conference play while shooting 67% on twos. He hasn’t just been good on the defensive glass, he has the second best offensive rebounding rate in Big Ten games.

And in contrast to his early-season shooting woes, Irvin was the star of the show Tuesday. The forward made three of Michigan’s 12 threes, flashed an ability to score around the basket and had the assertiveness to get to the line almost as many times (six) as the rest of the team combined (seven).

“Our assistants call him Big Shot, and that was sort of his reputation in high school and AAU ball and things like that,” Beilien said. “He’s driving the ball to the basket. He’s driving it under control. That was a good night for him — a really good night for him — and if we can just get him (to play) with the consistency that he expects of himself, that will really help us.”

Since arriving in Ann Arbor as top-100 recruits in 2013, all the three have wanted to do is help the team. But the team they joined was already ready to contend, so Donnal redshirted while Irvin and Walton enjoyed what Beilein called “cameo appearances” on a team that won the Big Ten title and came seconds away from a Final Four berth.

Both Walton and LeVert made a big impact at crucial moments in that season, but neither player was anything close to the team’s leader. Irvin and Walton did the math necessary to know that, at some point, it would be their team to lead.

That time will come in heaps next season, but the opportunity presented itself in a big way Tuesday. The juniors cleaned up their mess in time to shock the Terrapins, and are now tasked with leading the team in time to be a Big Ten and tournament contender once again.

Both have had their moments this season, but neither player has dominated a game like Walton and Irvin did a Tuesday night. For Walton, that meant shutting down All-American point guard Melo Trimble and icing the clock down the stretch to create his own offense with the pick-and-roll. For Irvin, banging against Maryland’s massive front court players on defense for 37 minutes and still having enough in the tank to hit a critical ball screen three-pointer in the closing minutes.

Added Irvin: “This is the Big Ten. It’s gonna be a dogfight each game. I think teams are overlooking us with (senior guard Spike Albrecht) and Caris out, and we’ve just got to let everyone know we are a good ballclub without them.”