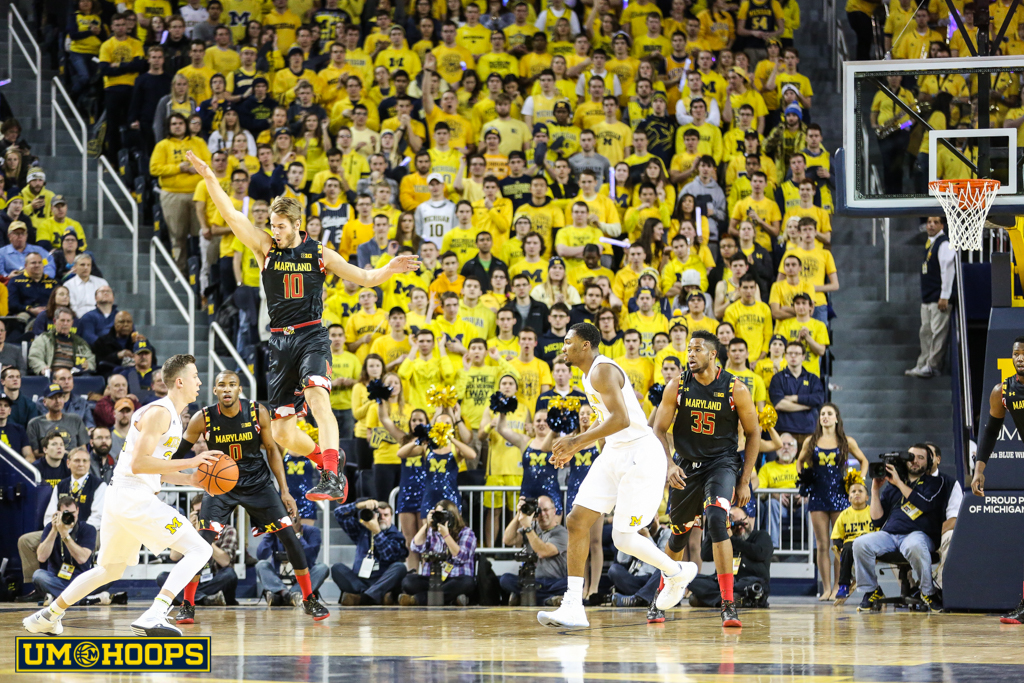 Michigan got the marquee win it needed on Tuesday and suddenly has momentum ahead of another difficult road test at Iowa on Sunday. Here are three thoughts on the Wolverines including finding the roll man in ball screen game, Derrick Walton’s finishing and Duncan Robinson’s half-by-half splits.

Michigan got the marquee win it needed on Tuesday and suddenly has momentum ahead of another difficult road test at Iowa on Sunday. Here are three thoughts on the Wolverines including finding the roll man in ball screen game, Derrick Walton’s finishing and Duncan Robinson’s half-by-half splits.

Michigan’s pick-and-roll offense has been cruising lately and a big reason why is its ability to create easy twos for the roll man.

Michigan has created more pick-and-roll opportunities for the roll man per game than any Big Ten team other than Illinois, but the Wolverines could improve in their efficiency at finishing the easy looks.

One area where U-M has improved in that regard is playing Mark Donnal. Donnal has emerged for Michigan and a major reason why is that he’s been the best finisher of these easy opportunities, an area where DJ Wilson and Ricky Doyle have struggled.

Doyle’s struggles relate to his elevated turnover percentage, turning the ball over 12.5% of the time that he catches the ball in the pick-and-roll game, and Wilson’s struggles stem from a low shooting percentage, 38.5 eFG%, due to his tendency to pick-and-pop for the three rather than roll to the hoop and finish.

Donnal and Wagner have been the most efficient, with the majority of Donnal’s production coming in the last four games and the majority of Wagner’s production coming in the Bahamas. For Wagner, the issues keeping him off of the floor have been on the defensive end. As natural as his feel for the game is offensively, he’s struggled to make the proper rotations and pick-and-roll reads on the other end.

Expect Donnal to continue to get a healthy dosage of pick-and-roll action and expect him to keep producing. His no frills approach to catching and finishing has worked this far and Zak Irvin and Caris LeVert seem to have confidence throwing him the ball.

Last year was a notoriously difficult season for Derrick Walton to finish at the rim. This year’s Big Ten season has followed a similar trajectory.

In Big Ten play, Walton is shooting just 19% on twos (33% for the season) and 47% on threes (53% for the season). Those numbers are eerily similar to the 32% two-point shooting that we saw from the point guard last season.

Earlier this season, it appeared that some of those finishing concerns had been resolved, but they are rearing their ugly head. Walton doesn’t lack explosion, his ridiculous defensive rebounding ability proves that, but for whatever reason he hasn’t been able to finish over bigger defenders at the rim.

Walton is shooting 44% on shots near the basket this year, a slight uptick from the 41% he shot last year, but way down from his 60% shooting at the rim as a freshman.

3. Duncan Robinson by half

While the percentage differences are negligible, the volume measure is significant. Robinson has attempted over 50% more threes in the first half than the second. The immediate reaction is to say what can Michigan do to get him more second half attempts, but the logic might be a bit more complex.

Here’s a breakdown of Robinson’s first and second half shot attempts via Shot Analytics.

The major takeaway from these shot charts is that Robinson has far more attempts in his positional home — on the right wing and in the right corner — in the first half than the second half. That suggests that teams defend him essentially in their base defense to open games, but are forced to adjust in the second.

Given the non-conference blowouts there’s at least some chance that Robinson wasn’t as aggressive in second halves, but he’s still playing major minutes in both halves. The reality of the situation is that teams are face-guarding him and playing all-out deny defense in the second half after he lights them up for a couple threes in the first.

It’s one thing to read the stats, but we’ve seen opposing coaches react after Robinson hits a few triples. Almost every Big Ten team has started out defending Robinson in a more traditional way and then made an adjustment to try to negate him from the offense.

Michigan believes that playing four-on-four is a huge advantage for the offense overall and they seem to be on to something.

The Maryland game is a great example of this. The Wolverines only attempted two shots at the rim in the first half in Tuesday’s win, one of which was a tip-in at the final horn. Robinson also made four first half threes.

In the second half, the Terps went to a smaller lineup and shadowed Robinson — often times with Jared Nickens — but that opened them up inside. Michigan made 7 out of 10 shots at the rim in the second half after failing to record more than two attempts in the first. That’s a statistic that the Michigan coaches will like to see and it allows players like Irvin, Walton and, when healthy, LeVert to make the plays they are capable of.

I also included a histogram of Robinson’s shot distributions by distance and by time remaining in the game (note that the first half is on the right side of the time left chart).

Note that Robinson seems to have a spike in shot attempts right around the 12 minute mark in each half. This matches the eye test as it is generally when Robinson really seems to have spearheaded runs that can shift the moment and also give John Beilein some flexibility with his bench.

One final side note on Robinson, his transition shooting numbers are other-worldly. Robinson has scored 56 points in 29 transition possessions — 1.9 points per possession — boasting a 103.8 effective field goal percentage. Every rebound or turnover, Michigan should be looking to find him on the wings because he’s nearly automatic and those triples are often times a five-point swing.