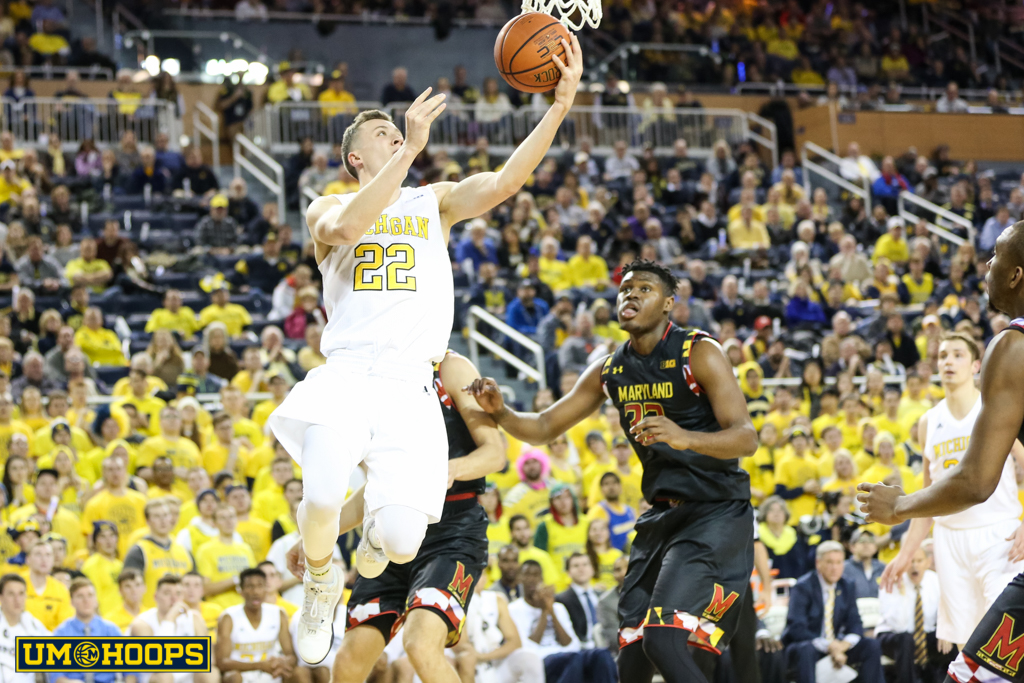 As expected, the waiting game will continue for Caris LeVert to return to the Michigan basketball team’s lineup as the Wolverines prepare for a weekend trip to Iowa City.

As expected, the waiting game will continue for Caris LeVert to return to the Michigan basketball team’s lineup.

After the senior guard hurt his foot at Illinois in the Wolverines’ Dec. 30 win, LeVert has been listed as day-to-day. Sixteen days later, that status remains unchanged.

“Caris will go though a series of tests today again to see where he is, and if he tests with no pain, he’ll begin the process of practicing,” said Michigan coach John Beilein. “If he tests with pain, then he’ll just be doing some things that will help his healing.”

Michigan is 2-1 with a win over No. 3 Maryland in LeVert’s absence, and has shown potential to make plays offensively and defensively in his absence. But as the team’s leader in points (17.6) and assists (5.2), his return would be a welcome addition.

“What has helped them is missing Caris last year,” said Iowa coach Fran McCaffrey in a teleconference Friday morning. “The veterans are improving … when Caris comes back, (they) have a chance to be really special.”

It’s no secret that Michigan has struggled at Carver-Hawkeye Arena in Iowa City. With a capacity of over 15,000 and little else going on in Iowa in January, the Hawkeyes benefit from a substantial home-court advantage.

“Iowa fans are hectic, and playing a Big Ten game on the road, it’s always tough,” said junior forward Mark Donnal. “So we’ve just got to prepare ourselves mentally for that kind of environment.

“It’s a little different, but it’s still basketball, the rim’s still 10 feet, and we’ve still got to go out and play our game.”

Michigan struggled mightily on the road at Southern Methodist and Purdue, it looked poised and controlled at Illinois and North Carolina State. It very well could be the toughest regular-season game the Wolverines will play all season, but that won’t faze their preparation.

“(We need) a lot of focus,” said sophomore forward Aubrey Dawkins. “Every crowd could be sold out and the students section is going to be ramped up, so we need to be locked in, pay attention to detail and make sure you don’t get too sped up.”

With a win at Purdue and two wins over No. 4 Michigan State since Big Ten play began, Iowa is quickly ascending as one of the best teams in the country. And according to Beilein, the Hawkeyes’ experience makes the strong start no surprise.

In total, Iowa’s four senior starters have a combined 60 starts this season. The Wolverines, on the other hand, have a combined 50 starts from seniors in the last four seasons.

And the quartet isn’t just experienced, either. Center Adam Woodbury, forward Jarrod Uthoff, guards Anthony Clemmons and Mike Gesell are averaging 44.5 points per game, and the team as a whole is 11th in both offensive and defensive efficiency.

With LeVert likely still sidelined, a daunting trip to Iowa City and a senior-heavy team looming, Michigan knows the challenge it has ahead of it.

“They’re a veteran team, they’re old and they stay connected on defense,” said redshirt sophomore forward Duncan Robinson. “That can be tough to beat … They don’t make a lot of mistakes.”

Added Beilein: “That’s what’s great about the Big Ten, you can build your resume everyday, not just four days in March.”