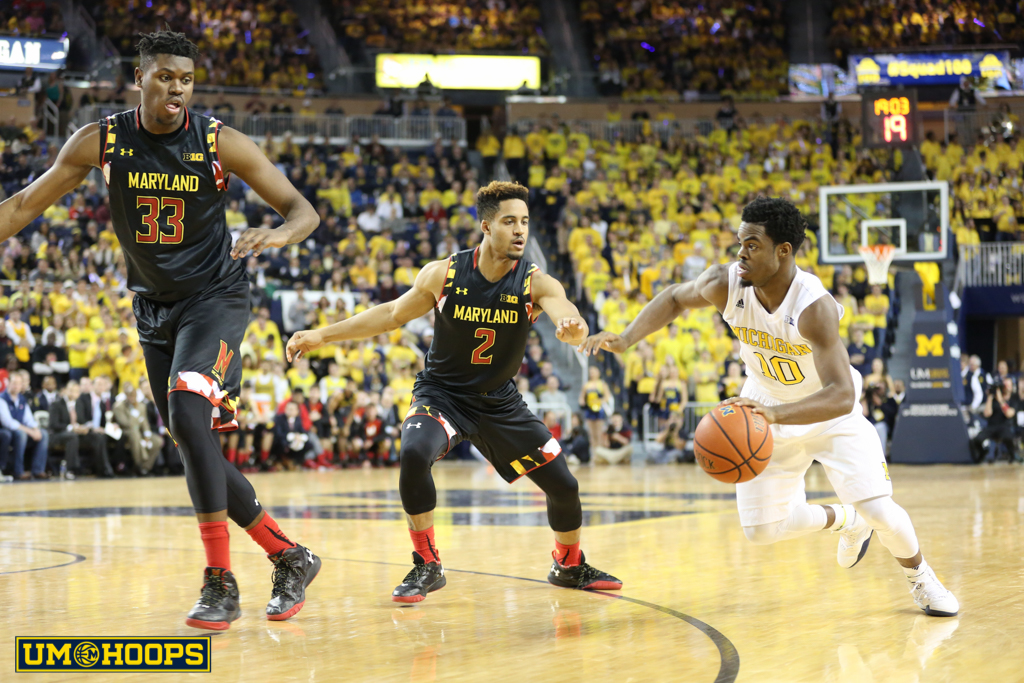 For much of Sunday’s 82-71 loss to Iowa, the Wolverines’ list of mistakes looked as short as ever. Michigan looked on par with the current Big Ten favorite without its leading scorer, and even looked poised for an upset late in the second half.

IOWA CITY — The final buzzer could barely be heard above the 15,400 ecstatic fans inside Carver-Hawkeye Arena, but the Michigan basketball team knew the drill as it walked off the court. Another bout on the road against a post-heavy top-25 team, another double-digit loss. Another hard-fought game, but another long list of mistakes and woes to fix.

But for much of Sunday’s 82-71 loss to Iowa, the Wolverines’ list of mistakes looked as short as ever. Michigan looked on par with the current Big Ten favorite without its leading scorer, and even looked poised for an upset late in the second half.

It didn’t happen, of course. The senior-heavy Hawkeyes played too well together in front of more than 15,000 of their faithful fans to lose, and the Wolverines hustled off the court with another loss.

Though it went 1-2 in its three-game, gut-check stretch against then-No. 20 Purdue, No. 3 Maryland and No. 16 Iowa, things went far from sourly for Michigan. Even without senior guard and leading scorer Caris LeVert, the Wolverines looked like they belonged against some of the nation’s best, and more than capable of flipping the script later on in the season.

Most importantly, Michigan looked like a better team each time.

“We’re battling, we’re really battling,” said Michigan coach John Beilein. “I just think sometimes we have a tape delay in some areas. Areas that some of our guys are getting better at, but still not fast enough to play against a team like this.

“But it all deposits in our knowledge bank so we can get quicker with our thought process as opposed to just saying ‘Oh man, my bad, I missed it again.’ I think they’re starting to realize a little quicker, but it’s not quick enough.”

Beilein declined to call the loss a moral victory, but it could be considered one moving forward. The Wolverines have been shelled and shell-shocked in their early losses — all by double digits — this season, and looked to be heading in that direction when it fell behind, 11-0, early.

But in a matter of minutes, that deficit was erased, and Michigan looked as good as it had all season. Brilliant passes, strong ball screens and a physical defense made up for a lack of 3-pointers. It ended up being a fleeting moment of clarity, but those moments were hard to come by in previous losses.

“We’re really happy with this from the standpoint that we didn’t go down,” Beilein said. “We did show a lot more than we did in a couple other games.”

In the three-game stretch, things went about as expected for the Wolverines, but the team earned the win it need and walks away better than expected. Even on tape delay, as Beilein suggests, strides are evident across the board.

Sophomore guard Muhammad-Ali Abdur Rahkman can make plays and finish plays; Junior forward Mark Donnal has transformed from liability to legitimate asset; redshirt sophomore forward Duncan Robinson can still shoot, but can also drive and defend; juniors Zak Irvin and Derrick Walton Jr. can do it all, and now even keep a cool head in crunch time.

And now, Michigan enters a four-game stretch where it could be favored in all four games. LeVert, who has never required a walking boot and is walking pain-free, should return in some capacity at some point.

But even if he doesn’t, his teammates know they can play with any team they face, and should beat most of them.

“We played some of the top teams we have in this conference, and we stood toe-to-toe in some stretches,” Walton said. “We only can get better from this point. … I think it really showed to ourselves and proved to ourselves and the country that we’re a really good team.”

On paper, losing to the Boilermakers and Hawkeyes by a combined 29 points looks ugly, even if they were road games. But on the court, Michigan wasn’t defeated when it likely should have been, and both losses showed fight, potential and promise.

Don’t call it a moral victory, those don’t count for anything. But Michigan’s trip to Iowa City wasn’t a total loss, either.

“I just think we’re growing right now and understand that this is a part of this game that is evolving within us individually and as a team that makes us better,” Beilein said. “I think they see the growth mindset that we’ve been encouraging, and so they get better throughout.

“That’s the hope, that’s our only hope.”