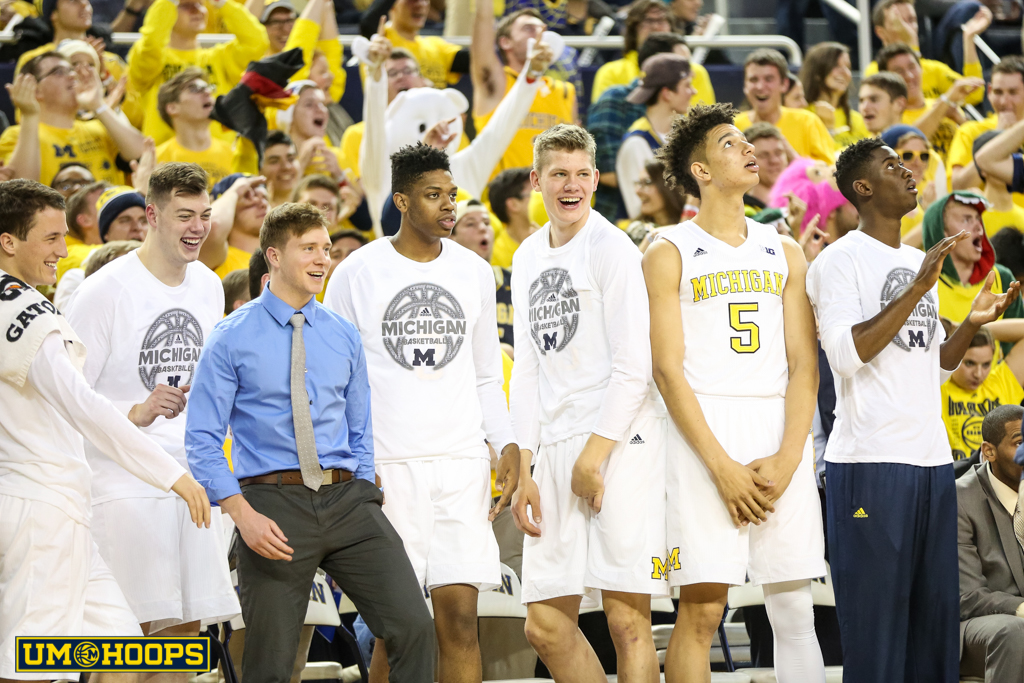 Speaking to the media to discuss the Michigan basketball team’s upcoming game against Minnesota, Michigan coach John Beilein said he is “encouraged” by LeVert’s progress, as the senior has begun to do light shooting and drills in practice.

The Caris LeVert injury saga has already carried on longer than anyone wanted it to, and it sounds like the end isn’t near yet.

Speaking to the media to discuss the Michigan basketball team’s upcoming game against Minnesota, Michigan coach John Beilein said he is “encouraged” by LeVert’s progress, as the senior has begun to do light shooting and drills in practice.

But with just one practice between Michigan’s games against Iowa and Minnesota and Beilein’s stated desire to see LeVert practice at least two days in a row before playing him, the coach does not expect the Wolverines’ leading scorer to play Wednesday.

“I would assume (he will not play Wednesday). We’ve only got one day to measure (the injury).”

Along with recently-retired senior guard Spike Albrecht, LeVert has served as the team’s captain the past two seasons, despite missing nearly two dozen games in the time span. LeVert has missed the last four games, in which the Wolverines are 2-2 with wins over Penn State and No. 7 Maryland, and losses at No. 22 Purdue and No. 9 Iowa.

Though those numbers and conventional wisdom would suggest LeVert’s return would be an asset to the team right away, Beilein recalled past injuries to Jordan Morgan, Mitch McGary and junior forward Zak Irvin and their ensuing slow recoveries as a sign to take things slow.

With plenty of winnable games on the horizon and more important games down the road, Beilein is in little hurry to rush LeVert’s recovery.

“There’s usually a time (during recovery) that is very difficult,” Beilein said. “We know who he is. But I’m not expecting miracles coming back. I would expect him to get through it.

“We still have 13 games left, all in the league. That’s why we have to look at this big picture and bring him along slowly when he does return.”

For most of the John Beilein era, Michigan has not been known for its big men. Of the seven Beilein players to progress to the NBA, only McGary has been a post player.

This year is no exception, as the Wolverines are 341st in offensive rebounding rate and 284th in blocks per game, and has been notably outmuscled down low in all five of the team’s losses.

The quartet of junior Mark Donnal, sophomore Ricky Doyle, freshman Moritz Wagner and redshirt freshman D.J. Wilson have all struggled in multiple games this season, despite all four of them surpassing 6-foot-10, but they’ve also shown flashes of potential. Only Donnal (13.0 points and 7.6 rebounds per game in Big Ten play) has emerged as a consistent presence in the middle.

But midway through the first half against Iowa on Sunday, a new post threat emerged. Struggling against Jarrod Uthoff and Iowa’s experienced post presence, Wagner and Wilson entered the game together.

Though the move was to contain Uthoff at the 4 position, the idea paid offensive dividends as well. With the pair adding length down low, Michigan immediately outscored Iowa, 9-0 over the next 3:05, including six crucial points in the paint.

“Just to have that length,” Beilein said. “A guy like Uthoff is just going to shoot over guys, so we put them out there for a little bit. … I hope that we can morph into the future as this shot clock, I have to look at ways that we can be more efficient.”

Beilein noted that the scheme worked with Wilson’s speed and Wagner’s passing ability, but doesn’t foresee the Wolverines rolling out two big men for more than a few minutes at a time in the near future. But when it does happen, both Wilson and Wagner — whose minutes have been sporadic at best this season — leap at the opportunity.

“I love playing with D.J.,” Wagner said. “I kind of missed it, to play with another big man on the court (in Germany) so that’s pretty cool.”

Added Wilson: “We’ve been doing it some in practice, and out in the game with me and Moe we seemed to have some success … I like playing with Moe.”

Michigan’s offense has thrived by controlling the ball and knocking down threes for several years, but this season might be the most prominent.

Though Michigan’s 13-5 record is less than ideal, Beilein feels that threes and turnovers are key to long-term success.

“I think 10 and 10 is a good mark,” Beilein said. “We want less than 10 turnovers, make more than 10 threes — if that’s what they’re going to give us. This team is built to play any way people play us, but if they pack it in, we’ve got to be able to shoot threes.

“So if you make 10 threes and have less than 10 turnovers, you have a chance to win a lot of games.”

In the past three seasons, such an occurrence has happened 17 times, including seven this season. The Wolverines are 15-2, with losses to Purdue on Jan. 6 and NJIT last season the only outliers. The loss at Purdue is the only time that Michigan has accomplished the 10-and-10 combination on the road. As far as ratio is concerned, Michigan is 9-1 this season when it has more 3-pointers than turnovers.

Though simple in concept, such feats are rare for Michigan, regardless of the opponent. Knowing this and the makeup of his team, Beilein said he shied away from benchmarks, instead just focusing on mistake-free possessions.

“Some of (our past teams) had a big margin of error because we just weren’t good enough,” Beilein said. “This team can be good enough if they are very efficient with their game … (In wins over Maryland, NC State and Texas) we just didn’t turn the ball over as much, and we shot very well.

“When you have your two seniors sitting there not dressed, you’re a team that’s learning on the fly, and that’s not good for teams that make a lot of mistakes.”