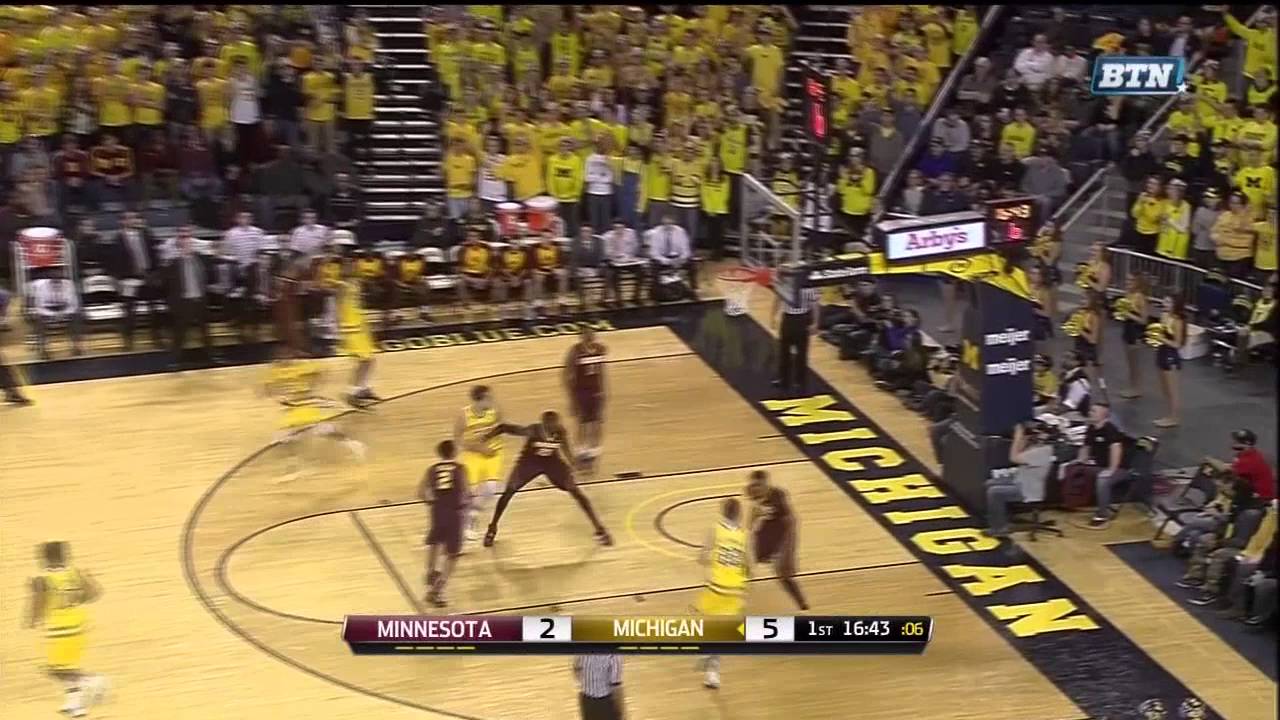 From the troublesome offense, to the misaligned defense to the crunch-time victory in the end, here are our five keys plays from Wednesday.

Over the course of 40 minutes Wednesday, the Michigan basketball team’s supposed guarantee game against Minnesota turned into a trap game scare.

Favored to win by over 15 points, the Wolverines (4-2 Big Ten, 14-5 overall) were unable to bury the Golden Gophers (0-7, 6-13). Michigan put forth one of its worst offensive performances of the season, and nearly gave Minnesota an upset that would make its season.

From the troublesome offense, to the misaligned defense to the crunch-time victory in the end, here are our five keys plays from Wednesday.

The junior forward Zak Irvin has looked improved as of late, and Wednesday was no exception. Jumping out to as much as a 15-point lead, Irvin was the offensive catalyst in the first half, scoring 15 points off pick and rolls and mismatches while adding seven rebounds in the frame.

“I just got in the flow at the beginning of the game and noticed that their big was switching off and guarding me and creating a mismatch,” Irvin said. “So I just had to do what I could.”

Irvin was shut down defensively in the second half, but his 19 points and 11 rebounds in the game stood tall. In five games without senior guard Caris LeVert, Irvin is averaging 15 points, five rebounds and 4.2 assists per game

“I think he’s playing at the highest level right now that he’s played since he’s been here because he’s putting it all together,” said Michigan coach John Beilein. “He’s getting to the basket, he’s shooting the ball well. We don’t win without him right now, he’s really playing well.”

With 1:56 to go in the first half, the Wolverines were up 15 and seemed on the verge of a blowout. But by missing quick, ill-advised shots on its own end and with the defense apparently heading to the locker room early, Michigan allowed Minnesota to claw back and pull the game within seven after an 8-0 run.

“We had a wide-open 3, we’re all shocked when Duncan doesn’t make two out of every three he takes, so we had a wide-open 3 ready to go up 18, and the next thing you know it was a seen-point half,” Beilein said. “That was the big thing at halftime that we need to come out with the same energy that we started this game. When you’re up by a lot and the lead goes down, it can really deflate a team.”

Minnesota’s run was also sparked by the fact that Muhammad-Ali Abdur-Rahkman, Aubrey Dawkins and Mark Donnal were all on the bench with two fouls, leaving Andrew Dakich on the court at a critical juncture late in the half.

The Wolverines were unable to recreate their first-half magic offensively, and proceeded to an overall sluggish night on both ends of the court. After facing three consecutive ranked teams, Michigan very nearly had a let down in front of a smaller home crowd.

“The only time I felt flat really was the end of the first half,” Beilein said. “With the weather tonight how cold it is and Minnesota is 0-6 coming in here. It’s not like (Maryland’s) coming to town.”

Just as Irvin dominated the first half, the second half was dominated by each team’s point guard. Derrick Walton Jr. and Nate Mason had 17 and 21 second-half points, respectively, and gave the game a pulse when neither team could make a shot.

Mason in particular carried the Gophers much further than they likely should or would have gone.

“I knew they were going to be challenging for us because their overall quickness,” Beilein said, “and we made a choice to not get beat by King on the outside and that really opened up some things from their guards, in particular Mason was really good.”

Though Michigan never trailed in the second half, it never had breathing room either thanks to Mason. Mason routinely put the ball on the deck and drove right by Wolverine defenders on the perimeter and was rarely met by help defense at the basket.

“We had some defensive miscues, but you’ve really got to tip your hat, Mason made some plays,” Walton said. “He made really tough drives, was getting to the line. It’s tough to play defense when you know he can shoot free throws and make plays like that.”

With 8:45 to go in the game, it appeared Minnesota had figured Michigan out both offensively and defensively. The Golden Gophers went on a 11-4 run to pull the deficit within three, forcing the Wolverines to call a timeout.

Duncan Robinson was missing shots he usually makes in his sleep, Muhammad-Ali Abdur-Rahkman had just missed two free throws and D.J. Wilson missed a dunk. It was clearly an off night for Michigan, but Beilein drew up a deep 3-point attempt for sophomore Aubrey Dawkins, one of just two Wolverines to make a shot in the last five minutes.

The play took about 10 seconds to develop, and in part fueled by a strong pass from Walton and an even stronger double-screen by Irvin, Dawkins knocked down the shot to give Michigan a six-point lead it desperately needed down the stretch.

5) Walton closes it out

Walton blew up for 17 points in the second half (22 total), including 10 points in the final two minutes. He also had two critical baskets that stretched Michigan’s lead to 9 points, including this three out of a timeout.

After the game, Beilein praised Walton’s improved aggression, especially in the closing minutes.

“He’s growing every single day and of course, you haven’t seen us in this (closer) type of game yet,” Beilein said. “We’ve either been up by so much people weren’t pressing and we didn’t need to make 10 foul shots to win a game like we did today, that was big that he could go and do that.”

Added Irvin: “He’s been playing with great poise, especially once we started Big ten play, which is what we need out of our point guard. He’s been able to be there when things are going tough for us and he made some big shots tonight when we really weren’t getting our shots to fall.”

Whether it was Irvin’s hot start or Walton’s strong finish, the pieces were just barely in place for Michigan to escape Wednesday with a win.