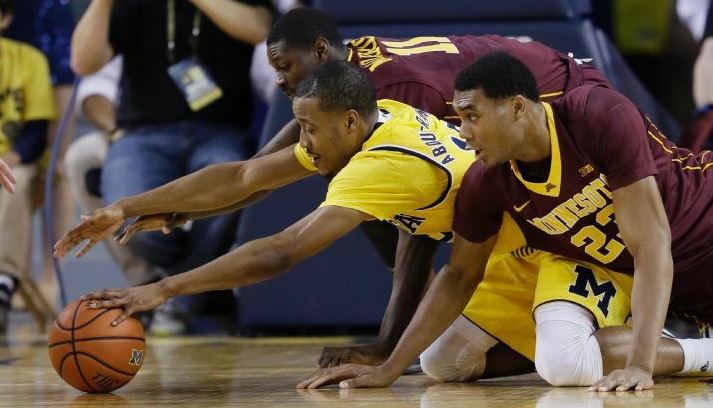 Michigan’s fourth Big Ten win of the year didn’t leave much to be excited about on Wednesday night.

“It’s a W,” John Beilein said after the victory. “We’ll take that W any day because it beats the alternative.”

Michigan’s fourth Big Ten win of the year didn’t leave much to be excited about on Wednesday night.

“It’s a W,” John Beilein said after the victory. “We’ll take that W any day because it beats the alternative.”

When that’s the best that the usually upbeat head coach can come up with after a conference victory, it was a generally an underwhelming night at the Crisler Center. The Wolverines didn’t shoot the ball well, didn’t defend well and were never able to pull away from the Minnesota Golden Gophers — one of two winless teams in the conference.

An array of miscues in the closing minutes of the first half turned what appeared to be a comfortable game into a frustrating slugfest for the final 20 minutes. The Wolverines led by double-digits for a large portion of the opening period, stretching their lead to as much as 15 points, but an 8-0 Gopher run gave Minnesota life and left the Golden Gophers scrapping around through the second half.

It was the right night for a horrid shooting night, but Michigan’s offensive performance was lacking on most counts. The Wolverines shot just 44% on twos (57% at the rim, 18% in the mid-range) and 29% on threes (49% of attempts) for a 44% effective field goal percentage. Michigan is one of the best jump shooting teams in the country, but tonight they just weren’t falling.

The only real positive on the offensive end was that the Wolverines held onto the basketball, only turning it over on 8% of their possessions against Minnesota’s aggressive defense.

On the other end of the floor, Minnesota was content to fire up bad shot after bad shot for the first 15 minutes or so which allowed the Wolverines to jump out to a quick lead. The Gophers only scored 9 points in their first 21 possessions (.44 PPP), but managed 60 in their final 51 (1.17 PPP).

One culprit for Minnesota’s offensive turnaround was the free throw. The Gophers didn’t attempt a free throw until the 7:47 mark in the first half, but attempted 17 for the game. The free throw production increased as Minnesota shifted to a smaller lineup and started attacking consistently off the bounce. Minnesota shot 16-of-23 (70%) at the rim and Nate Mason (25 points, 5 assists) and Carlos Morris (14 points) seemed to live in the paint throughout the second half.

The best news of the night was that Michigan was still playing Minnesota. The Gophers made positive plays, but just didn’t have the horses to complete the upset. Minnesota was just 9-of-36 (25%) on all shot attempts outside of five feet on the evening and missed a number of open threes in the second half that could have gotten them over the hump.

So much has been made about Michigan’s ‘easier’ schedule after its tough three game stretch, but this game was a firm reminder that this team — especially without Caris LeVert — can’t just go through the motions and beat anyone. Saturday’s test in Lincoln will be much more difficult as the Wolverines face a surging Nebraska team that has won four games in a row and just knocked off Michigan State in East Lansing.