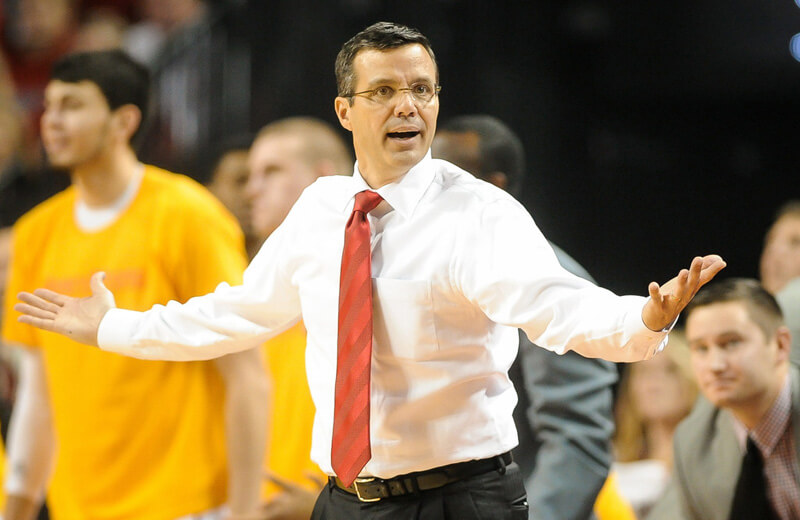 Michigan heads on the road for a game that once looked manageable, but now appears much more difficult. The Wolverines haven’t lost to Nebraska since it joined the Big Ten, but have only traveled to Pinnacle Bank Arena once, in 2014 when Derrick Walton secured a win with a baseline driving and-one layup.

Michigan heads on the road for a game that once looked manageable, but now appears much more difficult. The Wolverines haven’t lost to Nebraska since it joined the Big Ten, but have only traveled to Pinnacle Bank Arena once, in 2014 when Derrick Walton secured a win with a baseline driving and-one layup.

Nebraska went 8-5 in non-conference play with a bad loss to Samford and then lost its first three Big Ten games, including two at home. Sitting at 8-8, many had left the Cornhuskers for dead before the schedule lightened and they rattled off four straight victories. Wins over Rutgers, Minnesota and Illinois didn’t raise any eyebrows, but any time a team goes into the Breslin Center and walks out with a win — the league notices.

The Huskers are the second-best shooting team in the Big Ten with a 55.1 eFG% and they are doing it predominantly without the three-point shot. 58% of Nebraska’s Big Ten offense has been scored inside the arc, the most in the conference. That includes plenty of production at the rim, but the Huskers have also been extremely productive in the mid-range.

A third of Nebraska’s shots in Big Ten play have been mid-range twos and it is shooting an impressive 43% on those attempts. Only 31.5% (11th B1G) of its field goal attempts have been threes for a 37.2% three-point shooting percentage.

Despite the two-point heavy offense, Nebraska has struggled to get to the free throw line (27.8 FTA/FGA, 11th) is just average on the offensive glass, grabbing 31% of its missed shots.

On the defensive end of the floor, Nebraska has struggled to force turnovers (15.5% turnover rate, 10th) and avoid fouls (40.5 free throw attempts allowed per 100 FGA, 13th). Nebraska has also struggled to defend the three, allowing league opponents to shoot 36% from long distance.

The Cornhuskers’ pick-and-roll defense has shown same vulnerability and is ranked in just the 52nd percentile nationally according to Synergy Sports. Michigan has done a good job of creating pick-and-roll mismatches with Zak Irvin at the four in recent games and should continue to attack that option as Shields and White are not primary pick-and-roll defenders.

6-foot-7 wings Shavon Shields and Kansas transfer Andrew White form one of the most dynamic scoring duos in the Big Ten.

Shields is a known commodity at this point. Now a senior, he’s improved steadily each year and is a slasher with a great mid-range game. He’s coming off of a season-high 28 point performance at Michigan State that featured 12-of-17 two-point shooting. He does the majority of his work attacking the basket and loves the mid-range jumper. He’ll attempt the occasional three (20% of field goal attempts), but he shoots only 30% from long distance.

White has been one of the best newcomers in the conference this season after sitting out last season due to transfer rules. He’s scoring 16.9 points per game in Big Ten play, fifth best in the conference and he’s shooting 64% on twos and 47% on threes in league play. He’s primarily a three-point shooter (55% of attempts), but he’s an effective slasher and finisher as well.

Point guard Glynn Watson is one of the best freshmen in the Big Ten that no one is talking about. He’s Nebraska’s best pick-and-roll player, he can knock down the mid-range jumper, he defends and he’s the best passer on the roster. He’s not a great finisher and is a spotty three-point shooter, but he’s shown the knack to hit big shots as he’s grown into his role in Lincoln.

5-foot-9 senior Benny Parker shares the starting guard duties with Watson. He’s cut down on his turnovers and improved his efficiency in Big Ten play. He’s shooting 44% on threes and 46% on twos in Big Ten games and has a top-10 steal rate.

Junior guard Tai Webster was a highly anticipated signing coming out of New Zealand, but he failed to live up to expectations during his first two years in Lincoln. He had the second-worst offensive rating in the Big Ten among qualified players in each of his first two seasons, but has made major strides on that end of the floor. He’s now shooting 51% on twos and 41% on threes (21% of attempts) for a respectable 53.3 eFG%. He’s still somewhat turnover prone, but he’s been an x-factor for the Huskers this season.

Nebraska is young inside with 6-foot-10 freshman Michael Jacobson starting at the five position. Jacobson is a good offensive and defensive rebounder, a top-five shot-blocker in the Big Ten and he’s shooting 53% on twos in league games. He’s not a guy that Nebraska is going to throw the ball in post to all night, the Huskers have only logged 40 post-up possessions all season, per Synergy Sports.

Freshman Jack McVeigh is an Australian transplant who hit a pair of critical three-pointers in the second half in East Lansing. He’s just a 35% three-point shooter, but he’s in the game as a pick-and-pop stretch for threat and has to be guarded as a shooter. He loves the corner three (57% in Big Ten games) and has to be respected from that spot on the floor.

6-foot-7, 225 pound Chicago product Ed Morrow plays reserve minutes in the post. He’s turned the ball over on a third of his possessions against top-100 opponents, but finishes 62% of his two-point attempts.

Saturday’s game appears to be close to a coin flip. KenPom’s projections give Nebraska the 51% edge, projecting a 73-72 Cornhusker victory. Michigan will naturally need to play much better than it did on Wednesday night, but a win in Lincoln could go a long ways toward rebuilding momentum for a team that hasn’t won back-to-back games since the first two games of Big Ten play.