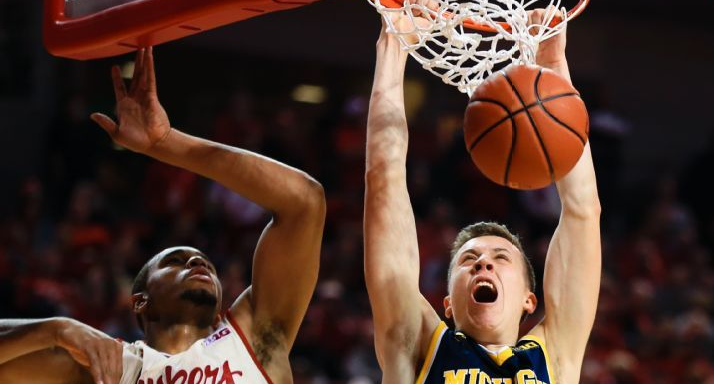 Michigan’s win at Nebraska was the sort of beautiful mess that’s required to win on the road. The Wolverines were far from flawless on the night, but they were perfect for long enough.

Michigan’s win at Nebraska was the sort of beautiful mess that’s required to win on the road. The Wolverines were far from flawless on the night, but they were perfect for long enough.

While the Wolverines outscored the Huskers by 1.49 points per trip during those two 18 possession spans, they lost the other 46 possessions of the game by a 42-56 margin. The beautiful basketball to start each half was good enough for Michigan to hold on, but there’s still work to be done for a Wolverine team that has bigger aspirations.

This was Michigan’s best offensive performance against a major-conference team and the heavy-lifting was done in the previously mentioned half-opening runs. The threes were falling in both halves for the Wolverines, but the ball screen chess match that was going on was fascinating.

Early on, Michigan was aggressive looking for its bigs near the rim, but they were struggling to finish inside. The Wolverines made just 4-of-14 two-point attempts in the first half, but turned it around in the second as their guards managed to find the roll man even when Nebraska blitzed and doubled the screen. Michigan made 10-of-12 twos in the second half, the majority of which were rolls or slips to the hoops or backdoor cuts.

Turnovers were nearly Michigan’s undoing. The Wolverines gave the ball away on 22% of their possessions and now find themselves ranked 7th in the Big Ten — behind Rutgers — in turnover rate. Michigan’s turnovers against Nebraska were primarily live ball giveaways and steals that led to easy baskets on the other end of the floor. The Wolverines were outscored 20-7 in points off of turnovers on the night and need to figure out a way to handle the soft press defenses that teams are throwing at them and still be able to run their offense effectively.

Michigan made up for its sloppiness with the ball both at the free throw line — where it outscored Nebraska 20-6 — and behind the three-point line — where it had a 15 point margin. The Wolverines also continued to do a good job on the glass, holding Nebraska to a 25% offensive rebounding rate while grabbing 33% of their own misses.

Defensively, Michigan held the Huskers to 1.06 points per trip, their lowest output since a January 5th loss at Iowa. The defensive effort wasn’t always perfect, but I was impressed with Michigan’s 2-3 zone which neutralized Shavon Shields in the middle of the court and dared Nebraska to win the game from the outside. Shields and White had more shot attempts and turnovers combined than points, but the Wolverines also struggled to keep Nebraska’s smaller, quicker guards out of the lane — a growing fear after the Minnesota game.

This was a critical win for Michigan both to build its confidence on the road, but also to stay in the Big Ten hunt. The Wolverines should be favored against Rutgers and Penn State this coming week and have a chance of moving to 7-2 before hosting the Indiana Hoosiers in early February.