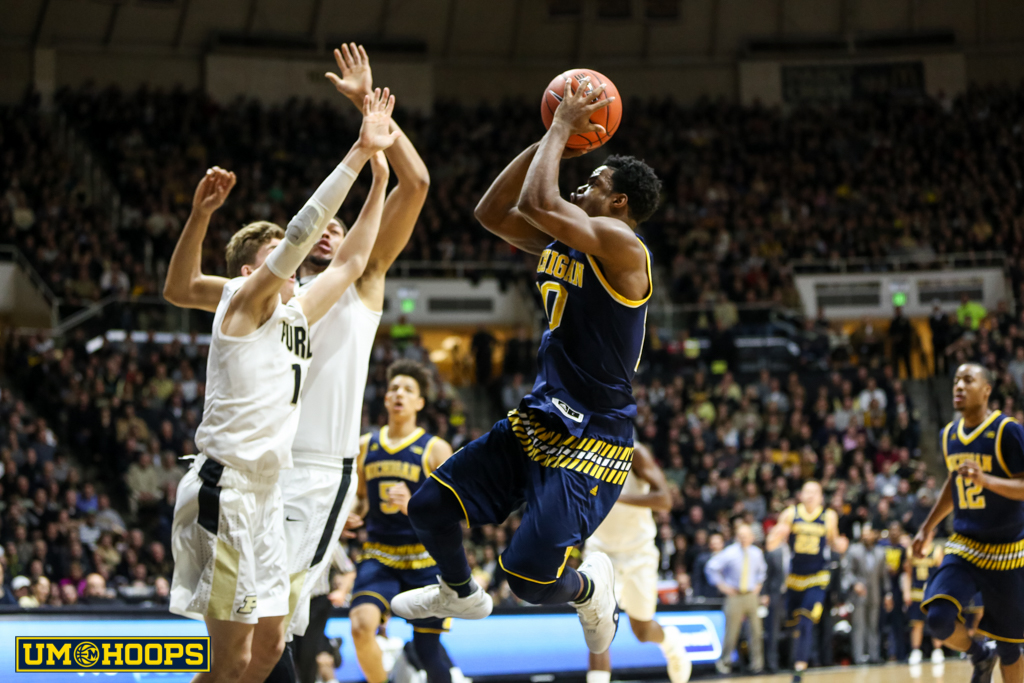 For most of the season, the Michigan basketball team has looked more talented, cohesive and prepared to win than Nebraska.

But it doesn’t always matter who you play, it’s when you play them, and the Wolverines may be playing the Cornhuskers at the wrong time.

For most of the season, the Michigan basketball team has looked more talented, cohesive and prepared to win than Nebraska.

But it doesn’t always matter who you play, it’s when you play them, and the Wolverines may be playing the Cornhuskers at the wrong time.

Nebraska (4-3 Big Ten, 12-8 overall) enters Saturday’s matchup riding a four-game win streak in Big Ten play. And while three of those wins were double-digit victories over lowly Rutgers, Minnesota and Illinois, a win in East Lansing over No. 11 Michigan State made it clear: The Cornhuskers cannot be taken lightly.

“We have our work cut out for us, without question,” said Michigan coach John Beilein. “They’ve lost four or five starters from what I’m sure what a disappointing team last year, and this team has matured will be a great challenge for us.”

Against the Spartans, Nebraska was led by senior forward Shavon Shields. Shields led the game with 28 points at the Breslin Center in Tuesday’s win, and is averaging 22 points and 5.7 rebounds per game in his last three games.

“Shavon Shields is playing as good as anybody in the league,” Beilein said. “What he just did at Michigan State is what few have ever done — he just carried them on his back all the way through the game.”

Of course, the recent hot streak does create a potential opportunity for Michigan. The Cornhuskers are a relatively inexperienced team, and Saturday’s game will be one of their first sellouts of the season.

With plenty of pressure on a confident yet unproven Nebraska team, Michigan knows playing with poise can dilute plenty of the Cornhuskers’ momentum.

“With the situation that we’re in … this would be a really big victory for us,” Beilein said. “The way they’re playing right now … it’s no different than going to the Purdue’s and the Michigan State’s … We’ve got another game with a lot of people in the building.

“It’s going to be a challenge for us, but we’re excited for that challenge.”

Fortunately for the Wolverines, some Michigan players do have experience succeeding in Lincoln. In their one other trip to Pinnacle Bank Arena (capacity, 15,000), the Wolverines opened to 2014 Big Ten season with a 71-70 win.

And though most of that team is graduated, in the NBA or not currently dressing for games (see below), the hero of the win — junior guard Derrick Walton Jr. — fondly remembers the experience.

“I hit a half-court shot (at the buzzer) and the game-winner,” Walton said. “I think that was a good road test for me as a freshman. Just looking to go back and steal another one there.”

After the win, which is the only home game Nebraska lost that season, Walton and his fellow Wolverines took off, going 15-3 in Big Ten play, capturing a Big Ten championship before reaching the NCAA Elite Eight.

Following a troubling game against Minnesota on Wednesday, the Wolverines could use another momentum boost on Saturday.

“The place was rocking then,” Beilein recalls. “I imagine we’re going to see a similar environment (Saturday).”

When Walton played hero two years ago, he was a wide-eyed freshman just beginning to make his mark. Now he’s one of Michigan’s most experienced (healthy) players, and his hero role isn’t just a cameo — it’s an expectation.

“That feels like ages ago,” said Walton. “I felt a lot littler and smaller. Just having Nik (Stauskas) and (Jordan Morgan) and Glenn (Robinson III). The group of guys here now, I’m starting to feel old.”

In news that is teetering into broken-record territory, senior guard and Michigan’s leading scorer Caris LeVert was ruled doubtful once again for Saurday’s game. Michigan’s star player has missed the last five games, and Beilein is in no rush to snap that streak.

“We want him to practice (first), really practice,” Beilein said. “He’ll be out there (Friday), try a few things and we’ll just keep going. But not optimistic again.”

Though the ruling wasn’t inherently good news, Beilein shed some light on LeVert’s injury, noting that it wasn’t related to last season’s stress fracture injury and does not appear to be a long-term injury.

LeVert, who was never seen wearing a walking boot, is walking and doing light shooting pain-free and recently added water treadmill workouts and swimming to his rehab, is said to “without a doubt” be back this season, according to Beilein.

That’s the hope,” Beilein said. “I don’t see anything getting in the way of that.”