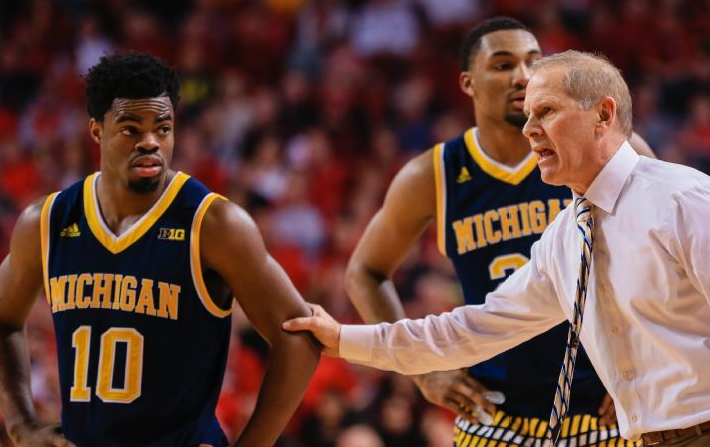 After one of its worst offensive performances of the season against Minnesota on Wednesday, points came easy for the Michigan basketball team in Saturday’s 81-68 win over Nebraska.

After one of its worst offensive performances of the season against Minnesota on Wednesday, points came easy for the Michigan basketball team in Saturday’s 81-68 win over Nebraska.

Entering a hostile, unfamiliar environment against one of the hottest teams in the conference, the Wolverines (5-2 Big Ten, 15-5 overall) took no time making themselves at home.

Through strong outside shooting, effective ball screens and a much-improved post presence, Michigan was not only able to put on a show worthy of a win, but provide a glimpse of what could be on the horizon if things begin to click for a full game.

“Anytime you play a team with as much skill and ability to execute like Michigan, you’ve got a lot of fear that could come to fruition,” said Nebraska coach Tim Miles. “It never feels like they’re going to miss. Every one, I’m like, ‘I think that’s in.’ ”

And in the opening minutes of each half, that line of thinking was accurate. In the first half, with a sold-out, 15,000-person crowd decked in red and in full excitement, the Wolverines calmly and swiftly dismantled the Cornhuskers’ defense, surging to an 18-6 lead in the opening five minutes.

The second half brought equally alarming success, as Michigan made its first nine shots to turn a three-point halftime lead into an 18-point margin.

Hot and cold shooting, of course, is just a part of the game. And though the Wolverines usually see more of the former, the way in which they scored was most impressive.

Michigan assisted on 72 percent of its field goals in the win and recorded an offensive rebound rate of 33 percent — both well above season averages of 58 and 25 percent, respectively.

It was Michigan’s ball screen game that put Nebraska on its heels and forced it to pick a poison against a nearly-unstoppable offense.

“They have to make a read and they have to make a play and we have to see the next option,” Beilein explained. “A couple times we threw it away trying to look at an option that wasn’t there. We continue to look at it and see what we can do, they have young bigs as well and they were switching some screens here and there. We’re learning on the fly with this group.”

Nebraska tweaked its defense and tried to come up with a solution for slowing down the Wolverines. Sometimes the Cornhuskers neutralized Mark Donnal rolling to the basket, other times they locked down on shooters on the wings. Michigan point guard Derrick Walton and wing guard Zak Irvin were able to make the right reads to get the ball where it needed to be a keep the Wolverine offense rolling.

“When you have a team like that that’s a rhythm offensive team you can’t let them get rolling,” said Nebraska forward Andrew White III. “That was our emphasis all week was to not let them have a hot start.”

Michigan came back down to earth in both halves, but the hot starts expanded the margin for error.

In slow spots, however, it was clear that the Wolverines missed the vision and playmaking ability of senior guards Caris LeVert and Spike Albrecht. Albrecht announced his retirement on December, and LeVert, the team’s leading scorer, has been inactive since suffering a lower leg injury Dec. 30.

Without them, other Wolverines are tasked with creating a well-oiled offensive machine. Saturday was Derrick Walton Jr.’s turn at the wheel, and through 18 points, 12 rebounds and six assists, the junior guard was able to stay one step ahead of Nebraska — even though the Cornhuskers did their homework.

“That’s the beauty of this and it’s also why we have to work so many hours,” Beilein said. “Everybody will play you differently and people may not have ever have done something and say, ‘Oh that worked, I’m going to try that.’

Michigan picked up another Big Ten road win, and continued to impress. But in short bursts at the beginning of each half, the impression was even stronger and more unavoidable — few teams in the country can score like Michigan can, and it doesn’t even need its best player.

“That’s huge for us to be able to do, to play off each other,” Beilein said. “We wish we had Spike, we wish we had Caris, but these guys can’t rely on those guys to make plays, so they’re improvising.”