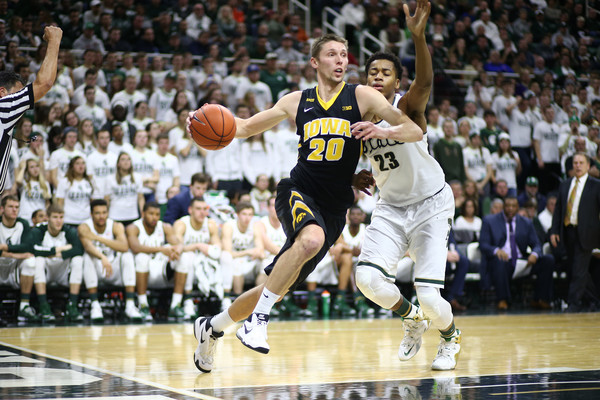 Iowa continues to emerge as the class of Big Ten and has now swept Michigan State and Purdue to sit at 7-0 with three road wins. The Hawkeyes have the Big Ten’s best offense at 1.17 points per possession, but they also can play defense.

Iowa has the best pick-and-roll defense in the conference by a pretty significant margin. The Hawkeyes don’t just do a good job of preventing shots off of the ball screen game, they also hold opponents to just .7 points per possession.

There’s no disputing the fact that Indiana has played the weakest schedule in the Big Ten, there’s also no questioning the fact that the Hoosiers have absolutely demolished their competition.

Outscoring league foes by .24 points per possession is impressive against almost any strength of schedule and Indiana looks like a team that’s starting to figure it all out. Most surprising? The Hoosiers have the Big Ten’s best defense through seven games, allowing just .93 points per possession in Big Ten games.

We’re 20 games into the season and Maryland’s resume still lacks the sort of quality victory that we’d expect from a team expected to go deep into March.The Terps won at Wisconsin, beat UConn on a neutral floor and beat Georgetown at home, but they’ve lost their two biggest road games in Big Ten play — at Michigan and Michigan State — and need a win over a top tier league foe. The Terps will have that opportunity this week when they host Iowa with a chance to move within one game of the conference lead.

Purdue’s domination of both backboards has continued in Big Ten play. The Boilermakers rebound 38.4% of their misses and 80.1% of their opponents misses — both best in the league by a wide margin — but everything else has been a struggle. Purdue doesn’t rank better than 5th in the conference in any other conference-only Four Factors stat on either side of the ball.

Among the 100 teams tracked by Shot Analytics, Michigan is the most proficient corner three-point shooting team in the country. The Wolverines shoot 48% on corner threes, tied with Oklahoma for the fourth-best percentage among tracked teams, but they also attempt 13% of their field goals from the corners. Only Rice and Southern Miss attempt as many corner threes as the Wolverines, and they both shoot 30% or worse.

The corner three isn’t a shorter distance as it is in the NBA, but it’s still a high-efficiency shot that is usually created via the drive-and-kick. Michigan’s corner three specialists are Duncan Robinson (46 attempts, 63%) and Aubrey Dawkins (19 attempts, 53%).

Michigan State snapped its three game losing streak with an emotional home win over Maryland on Saturday night. Matt Costello played a monster game for the Spartans, recording a double-double, and Denzel Valentine flirted with a triple-double, but the difference for Michigan State was that senior guard Bryn Forbes was hitting shots.

When Forbes shoots the ball well, the Spartans generally win. Forbes is shooting just 25% from three in Michigan State’s four losses this season and is making 51% of his threes in wins.

The Cornhuskers are in the middle of one of the type of stretches that gives every Big Ten coach nightmares: at Michigan State, vs. Michigan, at Purdue, vs. Maryland. A 1-1 split in the first week was a nice start for Tim Miles’ group, but now they have to face Purdue and Maryland teams that will be hungry to get on the right track.

The Buckeyes have lost three of four after a 3-0 start and should have an interesting week ahead. Games against Penn State and at Illinois are winnable, but both of those teams have proven capable of an upset victory whereas Ohio State has been susceptible to a bad loss.

Wisconsin hasn’t lost at home to Indiana since 1998 which means it is 13-1 against the Hoosiers at the Kohl Center (the Hoosier win in 1998 was a week after the Kohl Center opened for Basketball). Tuesday’s showdown with first-place Indiana could be critical to the conference race as the Badgers look to take out another Big Ten contender at home.

We made so much about Northwestern’s schedule and now the wheels appear to be falling off in Big Ten play. The Wildcats have lost three in a row and five out of seven and have just the 10th best offense in the conference. Here’s a look at the Wildcats’ shooting drop-off from non-league to Big Ten play.

Could Maverick Morgan be the Mark Donnal-style breakout big man that Illinois needs in the middle? The Illini have had interior problems all year — Big Ten opponents shoot 54% on two-point attempts — but Morgan stepped up with 14 points, seven rebounds and a block in 35 minutes against the Gophers.

It’s not easy being Pat Chambers. Five of Penn State’s seven Big Ten games have been classified ‘tier A’ games by KenPom — top-50 games after adjusting for venue and the Nittany Lions have played just three games at home since December 12th.

Their next six games are also classified tier A games and they still have to play their next three on the road, one of which would have been a home game and is now a trip to Madison Square Garden to face Michigan.

Minnesota showed some fight this week, giving Michigan a game in Ann Arbor and taking Illinois to overtime, but the 0-8 conference record speaks for itself.

In this week’s edition of ‘how bad is Rutgers?’ we examine just how far behind the rest of the league the Scarlet Knights are. The gap between Rutgers and Indiana in efficiency margin is a preposterous .6 points per possession.