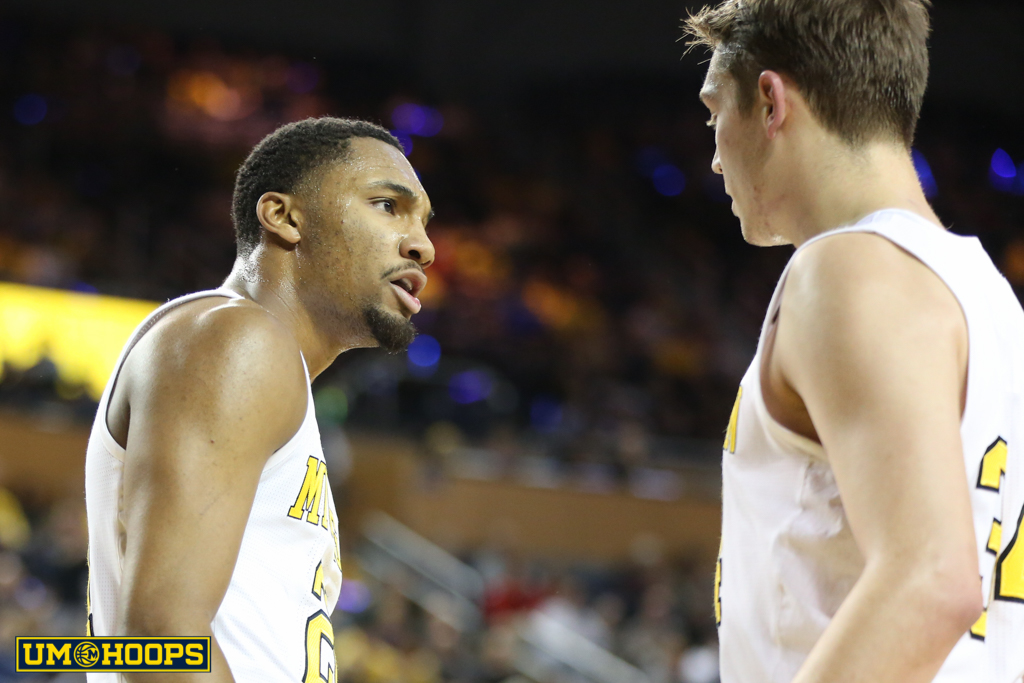 The UM Hoops Mailbag is a collection of questions tweeted (@umhoops), e-mailed or sent via our Facebook page. Today we look at Zak Irvin’s role with and without Caris LeVert, Michigan’s uncharacteristic turnovers, the 2017 Big Ten race and much more.

UMHoopsFan: The team hasn’t been as good at avoiding turnovers as vintage Beilein Michigan teams, which I attribute in part to Caris’s absence, perhaps Spike’s as well. Are Derrick, Zak, and MAAR just a little more TO-prone than past ball handlers? Any other reasons? And will the team turn this around?

Turnovers are a problem for this team and, as you say, that’s completely out of character for a John Beilein team. Michigan has turned the ball over on 20 percent of its possessions in four out of seven Big Ten games this year.

Last year’s team turned the ball over that often in just three Big Ten games — and they were a sub-.500 Big Ten team. The 2014 team gave the ball away that often only twice against Big Ten opponents and the 2013 team did it three times in Big Ten play.

With over half of the season still to play, Michigan is almost certain to break those marks and turn the ball over as many times as it did in Trey Burke’s freshman year when it turned the ball over on 20% of its possessions in five league games.

But if there’s one thing that Beilein knows how to coach its avoiding turnovers. Michigan still ranks 11th nationally in turnover rate despite its eighth best 16.6% turnover rate in Big Ten play and I’d suspect that we’ll see improvement in that department.

JLi5: It seems that guys like Walton, Caris, and Dawkins give up the drive more easily than one would think given their quickness in other areas of the game. How much of this is due to their lack of development in on-ball defense versus playing with a lack of traditional rim protecting big man?

If it’s more the latter (endemic to the system), how does Michigan improve going forward? Is this maybe where the occasional struggles with Caris in the lineup actually comes to bear (pushes MAAR to the bench)?

There’s little doubt that Michigan has plenty to fix defensively. The Wolverines are ranked ninth in the conference in defensive efficiency, allowing 1.08 points per possession, and 125th nationally in adjusted defensive efficiency. For comparison, the last two teams ranked somewhere around 110th.

As you mention, having an elite shot blocker can eliminate a lot of problems on the backside, but it’s not the only way to play good defense. Guards can do a better job of eliminating penetration — Abdur-Rahkman and Walton have both done this well at times — but more importantly the help side rotations can continue to improve. There have been plenty of situations this season where Michigan guards will force a defender baseline, right where help should be coming and it’s late.

Mark Donnal has been Michigan’s best big man in this regard, but even he has been a work in progress. The Wolverines are never going to be a great perimeter defensive team and lack the sort of lock down defender that can fight through every ball screen like Rapheal Davis, but they can still improve by communicating and improving on their defensive rotations.

@jlustig22 When Caris comes back, can Irvin still be a focal point or will his usage rate go way down. Seems he’s played better w/o LeVert.

Zak Irvin has plenty of flaws, but the ability to use up possessions isn’t one of them. His recent improvement has much more to do with his confidence, health and emotion than increased opportunities. There’s no question that he wasn’t close to 100% early in the season and as recent as December, John Beilein hypothesized that he might not even be 100% this year.

The biggest difference between Irvin earlier in the season and Irvin now: he’s making his threes. Irvin is shooting 47% from three-point range in Big Ten play and he shot just 20% from long distance in the non-conference.

I wouldn’t describe Irvin as emotionally unflappable. When he’s playing well, he starts playing better. When he’s struggling, it often times gets worse. I actually think he’s done a good job of improving on that element of his game this season (evident by his assist and rebounding numbers being very in non-conference play despite the awful shooting), but we’ve seen a different, more complete player now that everything is coming together.

And what has made him so effective in Big Ten play is that he’s an incredibly difficult player to guard for opposing fours in the Big Ten. Most players that log the majority of their minutes at the four position aren’t used to guarding perimeter shooters or ball screen players — let alone both. This won’t change when Caris LeVert returns, it’ll only stretch opposing defenses further and give LeVert an easier time to create with more court spacing.

@tomgritter Michigan the favorite for the B1G title next year? Other top teams this year lose a lot and we lose no one who is currently playing

The last three weeks will certainly give pundits a lot more confidence in picking Michigan to excel because we’ve essentially been watching next season’s team a year ahead of schedule.

Iowa, Indiana, Maryland and Purdue all lose quite a bit and while Michigan State loses a lot in Denzel Valentine, Matt Costello and Bryn Forbes among others. However, the Spartans also bring in the top class in the conference that’s loaded with instant impact players like Miles Bridges and Josh Langford. I would expect Michigan State to be the favorite in the league next year.

Ohio State is probably the smart money bet for most improved as they don’t play any seniors, have talent and some easily correctable flaws. They’ll get better and they have plenty of talented players that just need to learn more about how to play Big Ten basketball.

But Michigan should be right there in the mix. They’ll have two seniors and other experienced players, but they’ll also inject a bit of fresh blood into the program with a four-man freshman class.

@maxschnell95 Michigan is currently over signed. Where will the extra scholarship come from next year?? Will someone be forced to transfer?

The Big Ten allows schools to over-sign by one in the early signing period because of how much attrition there is in the college basketball world. Jeff Goodman’s annual transfer list is usually over 700 names which means there are an average of 2 transfers per Division I program. Add in early entry and attrition is just a fact of life for college basketball coaches.

Michigan has been under its 13 allocated scholarships during most seasons under John Beilein, in large part because of early entries and transfers. The simple fact of the matter is that yes someone will have to either a) transfer or b) prep to fill out the roster next year.

Both of those are possibilities at this point and that’s something that will likely play itself out after the season is over.

@andy19il How does Robinson’s season match up with Stauskas’ freshman year? Do you think he can replicate his leap as a (junior) next year?

Robinson has a bit of a head start given that he’s in his third season of basketball after high school, including sitting out last year, but he has two years left at Michigan and plenty of developing to do.

Those statistics manifest themselves in the two-point/three-point shooting splits for both player in their first year in Ann Arbor. 18% of Robinson’s field goal attempts have been twos compared to 39% of Stasukas’ as a freshman. Stauskas was far more capable putting the ball on the deck and getting to the rim, where he also showed off a better finishing ability.

On the other hand, Robinson is shooting threes at an elite level and he’s on a pace to smash any of Stauskas’s three-point shooting totals. He’s averaging 3.35 made three-pointers per game (2.9 in Big Ten games) which would put him on pace to make 100 threes by the end of the regular season. Stauskas made 80 in his freshman season and 92 in his sophomore season. For those keeping track, the Michigan record is Louis Bullock’s 101 makes in 1997 and the NCAA record is Steph Curry’s 162 in 2008 (4.5 3pm/game).

I don’t necessarily see Robinson following a Stauskas-like development path and turning into a pick-and-roll player next season, those responsibilities will fall largely on Irvin and Walton, but that’s not necessarily a bad thing. Robinson has grown exponentially in his cutting and passing ability over the last few weeks and he’s a ridiculous shooter with size and a quick release. As he develops just a bit more in terms of driving, cutting and finishing, his already elite shooting ability will become more prominent.

@mjstein10 can Michigan really make any sort of run in the tourney playing defense the way they’re playing now, despite the offense humming?

The NCAA tournament is all about matchups, but it’s certainly possible. I think we probably know that defense will be this team’s undoing whenever the season ends, but it has the offensive firepower to beat just about anyone when the offense is clicking. That being said, I think there’s still a lot of room for this defense to improve despite its inherent limitations.

Michigan’s last two teams to make runs in the NCAA tournament defied conventional wisdom in many ways that a great defense is required to make a tournament run. The 2014 team was ranked 109th in adjusted defensive efficiency at year’s end, even after making a run to the Elite Eight. However, they were also one of the best offenses of the KenPom era.

I’m not sure this team’s offense will get to that level, but it could still be possible. We haven’t really seen this team when Caris LeVert, Derrick Walton, Zak Irvin, Duncan Robinson and Mark Donnal are all healthy and playing well at the same time. Despite that, Michigan has the 11th best offense in the country.

@WeiBrian when Caris comes back, who plays the 1 when Walton gets a rest: Rahk, Caris or Dakich?

We’ve already seen a critical shift here, even before LeVert comes back. At Nebraska, Beilein shifted Zak Irvin to the two and Muhammad-Ali Abdur-Rahkman to the one when he wanted to rest Derrick Walton — rather than playing Andrew Dakich at the one. Beilein’s growing confidence in Irvin at the two (and Dawkins on the floor on the wing) leaves Beilein with plenty of options to rest Walton going forward.

I think you’ll see Beilein stagger Walton and LeVert’s rest by rotating Abdur-Rahkman through the lineup for each player. Whether LeVert or Abdur-Rahkman is the ‘one’ in that scenario is probably semantic, but I think the answer is LeVert.

If Aubrey Dawkins is locked in or Abdur-Rahkman is struggling, I think we could perform a similar rotation with Dawkins replacing Walton and LeVert to slide Zak Irvin down to the two guard to provide rest.