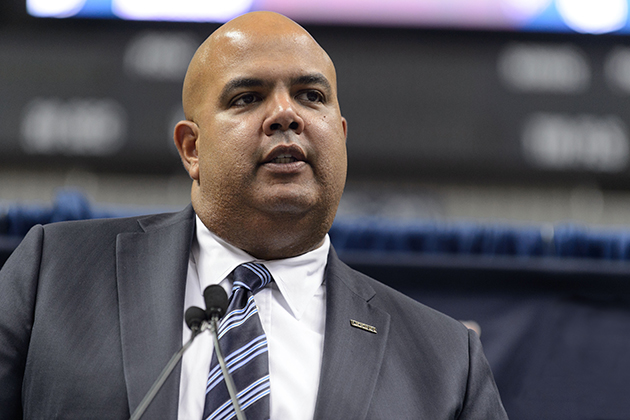 According to a report by former Boston Globe writer Mark Blaudschun, Michigan intends to hire Warde Manuel as its new athletic director.

According to a report by former Boston Globe writer Mark Blaudschun, Michigan intends to hire Warde Manuel as its new athletic director.

UConn officials have since confirmed the report. Manuel will replace interim athletic director Jim Hackett, who has been at Michigan since October 31st, 2014 when David Brandon resigned.

Manuel played defensive tackle under former coach Bo Schembechler from 1986 to 1989 and served in the athletic department in Ann Arbor before moving to Buffalo in an athletic director role. He made the move to UConn in 2012 and has been in Storrs ever since.

Manuel hired UConn coach Kevin Ollie, who took the Huskies on a run through the 2014 NCAA Tournament to a National Championship.

According to the Detroit Free Press, contract details are still being finalized.

Contract details are still being finalized, but an announcement could happen as soon as this week. A message left for Manuel was not immediately returned.

U-M spokesman Rick Fitzgerald would neither confirm nor deny the report. “We have no information to share with you about this report,” he wrote to the Free Press in an email.