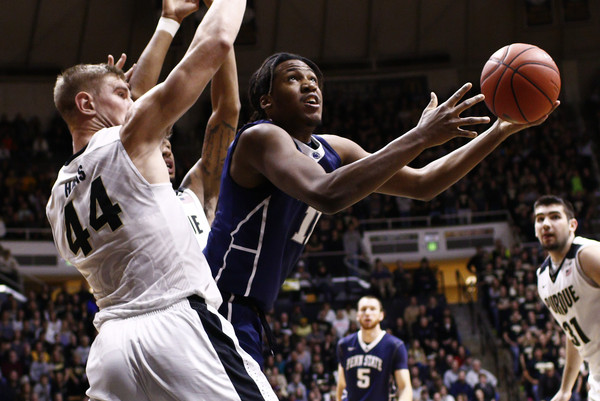 Michigan heads to New York City this weekend to play its sixth game in the Big Apple over the last four seasons. The Wolverines will close out the month of January by facing the Penn State team that they beat handily, 79-56, to open the month in their first game without Caris LeVert.

Michigan heads to New York City this weekend to play its sixth game in the Big Apple over the last four seasons. The Wolverines will close out the month of January by facing the Penn State team that they beat handily, 79-56, to open the month in their first game without Caris LeVert.

Life without LeVert hasn’t been too bad thus far as Michigan has amassed a 5-2 record in games without their leader and superstar and sits a game out of first place in the loss column. A win over the Nittany Lions would setup back-to-back marquee home games against Big Ten contenders, Indiana and Michigan State, with the Wolverines positions right in the middle of the conference race.

Penn State has played one of the toughest schedules in the league thus far. Five of the Nittany Lions’ eight Big Ten games have been on the road and they’ve already played at Maryland, Michigan, Purdue and Ohio State with a home game against the Spartans sandwiched somewhere in-between. Pat Chambers’ team has pretty much seen it all to this point, but they’ve only managed a pair of wins — at home against Minnesota and at Northwestern.

The bright spot of the Penn State offense has been its ability to get to the free throw line. The Nittany Lions attempt 40 free throws per 100 field goal attempts, second best in the Big Ten, and posted free throw rates over 50% in their two conference wins. The free throws have been a nice perk because shooting has been a chore. Penn State shoots just 49% on twos and 28% on threes for a 46% eFG%, second worst in the league. The Nittany Lions have below-average in the turnover department and on the offensive glass, ranked 10th and 11th respectively in both statistics.

It’s tough to find many bright spots in Penn State’s defensive profile. The Nittany Lions are ranked 11th in effective field goal percentage allowed, 11th in defensive rebounding and 11th in free throw rate allowed. They have done a solid job of forcing turnovers, and forced Michigan to give the ball away on a fifth of its possession earlier this month.

Sophomore point guard Shep Garner is critical to Penn State’s offense as he’s really the only volume shooting guard or setup man on the roster. Garner has struggled over the last four games, making just 5 of his last 15 twos and 3 of his last 18 threes while amassing a 18 to 15 assist to turnover ratio, but there aren’t many other options on the roster. He also picked up an ankle injury in Columbus on Monday and will be a game-time decision on Saturday.

Combo forward Brandon Taylor is the highest usage player on the PSU roster and Zak Irvin did a good job of defending him the last time these two teams played. Taylor scored 18 points in the game in Ann Arbor, but he needed 16 shots and two turnovers to get there. Taylor shoots 50% on twos and 30% on threes in league play and ranks third in the conference in percentage of shots taken while on the floor. Taylor does his best work from around 10-feet, but will also step out and shoot the triple.

Swingman Payton Banks is a plus-offensive rebounder for a wing but not a great shooter (40% on twos, 29% on threes). Devin Foster has seen an u-tick in minutes in conference play due to injuries. Foster can hit the occasional three (50%) and had five rebounds in the first meeting.

Jordan Dickerson, Julian Moore, and Donovon Jack play the majority of the minutes in the post for the Nittany Lions.  Dickerson is a plus shot-blocker and finisher at 7-foot-1, 245 pounds. He’s shooting 67% on twos, but doesn’t see many possessions — failing to score double-digits this season. Moore has stepped into the starting lineup over the last three games after a breakout 13 point, 4 rebound performance against Micihgna State. He’s the fourth best defensive rebounder in the Big Ten and an above-average shot blocker, but he shoots just 47% on twos. Jack will step out and shoot the three, where he shoots 41% but can also finish at the rim.

KenPom projects a 72-65 Michigan win, giving the Wolverines a 76% chance of advancing to 7-2 in league play. The Wolverines are 5-1 in New York City since the current senior class arrived on campus and while this is technically a Penn State home game, the Wolverines have made New York City something of a home away from home — a trend they’d certainly like to keep going.