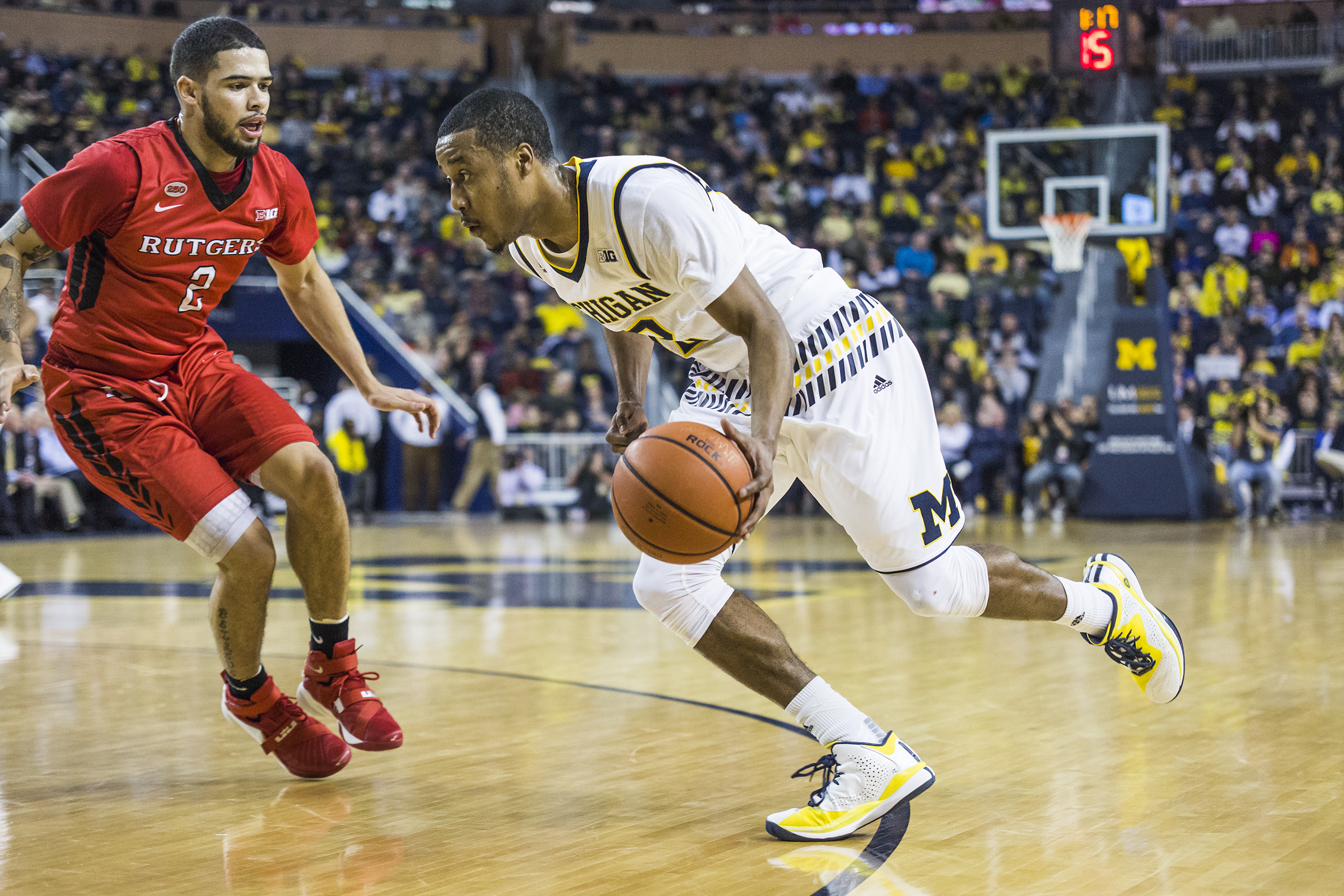 Michigan is headed to New York City to play another game likely without Caris LeVert while Warde Manuel was introduced as athletic director in Ann Arbor.

By just about any measure, the Michigan basketball team has experienced little drop-off in losing senior guard and leading scorer Caris LeVert.

Efficiency is down slightly, but the Wolverines (6-2 Big Ten, 16-5 overall) have gone 5-2 without their star player, and have shown they can win on the road (Nebraska), when their shots won’t fall (Minnesota) and even against top-tier teams (Maryland).

But in an ugly win over Rutgers on Wednesday, Michigan showed the hardest part of playing without LeVert. With eight games in February — four against ranked teams — beginning next week, the Wolverines’ are concerned about depth and fatigue.

“You felt that they practiced too hard, you wonder if they had enough time off … you can’t ever put your finger on it,” said Michigan coach John Beilein of the flat start. “We practice hard, and I try to give certain guys more rest on a given day, maybe we didn’t give them enough the other day, that sweet spot Is hard.”

Though everyone on the team is conditioned and prepared to play plenty of minutes, the fatigue of day-in, day-out practices without the Wolverines’ most experienced players (senior guard Spike Albrecht will also miss the season) could be taking its toll.

“A lot of us like to get up in the gym and take extra shots after practice, even on off days,” said sophomore guard Muhammad-Ali Abdur-Rahkman. “But the coaches addressed that and said that we should probably rest a little more, especially since we’re in the midst of a Big Ten season.

Beilein noted that the excitement around playing in Madison Square Garden on Saturday will provide some natural energy, but moving forward, knows his team’s lack of depth may take its toll.

“We really need D.J. or Kam to emerge right now,” Beilein said. “We need one of those guys to emerge to give us some time.

“We need one more guy to step up and give us some continuity so that we can get more rest in practice, that’s a big thing.”

LeVert running, but not returning yet

Of course, Michigan’s fatigue issues could be solved if LeVert returns. The guard has yet to practice in full, but Beilein insisted he is progressing.

“Caris was able to do more yesterday than the day before,” Beilein said. “It was good to see him out there running around a little bit.”

Without a full practice, LeVert is doubtful for Saturday’s game. But with games against No. 18 Indiana and No. 12 Michigan State next week, his presence could be more necessary.

But as always, Beilein stressed patience over performance when discussing LeVert’s return.

“As I’ve said before; when you see him out there for warmups, that’s when you know he’s going to be ready to play.”

For now, LeVert has been doing extra swimming and rehab, while still trying to fulfill his captaincy duties.

“He’s definitely involved,” Abdur-Rahkman said. “He’s always giving us pointers about what’s going on out there and trying to help us … Tell me where to be at certain times on the court, things I can think about during the game.”

While the Wolverines prepared for their trip to New York City, bigger news was going on across campus. Connecticut athletic director Warde Manuel was named to the same position at Michigan.

Manuel attended Michigan, where he was a football and track athlete and later an assistant in the Athletic Department. He replaces Interim Athletic Director Jim Hackett, who served the position for 15 months.

“Jim Hackett was just absolutely incredible coming in and just providing smooth air for all of us,” Beilein said. “He focused on what was important, and he trusted the rest of his staff to keep the athletic program going.

“It’s obviously a very positive step for us,” Beilein said. “Hopefully it will bring us stability for a long, long time. I wish I could stay and get to know him better right now, but we have a 12 o’ clock game in Madison Square Garden.”

Beilein only met Manuel informally in November, when the two commuted a mile back to the hotel from Michigan’s game against UConn, but heard nothing but praise from those that know Manuel — including Reggie Witherspoon, a former Beilein player that worked for Manuel as basketball coach.

“I really felt comfortable out there today listening to him (during Manuel’s introductory press conference) and talking to people that know him much better than I do,” Beilein said.