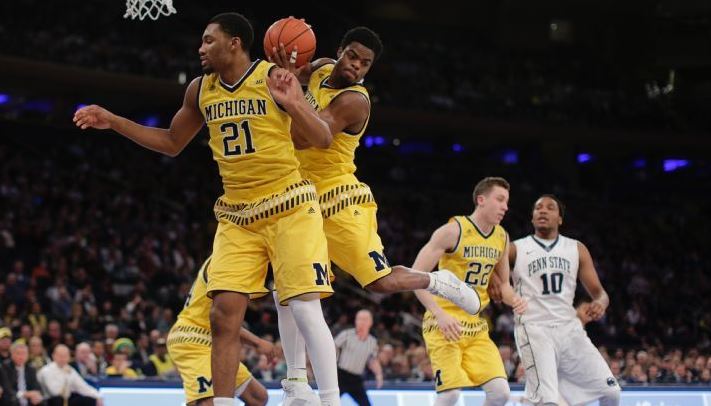 Michigan knocked off Penn State, 79-72, to win the basketball portion of the inaugural Big Ten Super Saturday at Madison Square Garden. The Wolverines moved to 7-2 in conference play with the victory and sit just a game out of first place in the league race with home games against Indiana and Michigan State on the schedule next week.

Irvin did just about everything other than hit free throws in Michigan’s win. He finished with 20 points on 7-of-12 shooting and was very efficient driving to the rim and finishing through contact. Irvin didn’t necessarily have the assist numbers to back his all around performance, but he looked comfortable offensively while having to deal with Brandon Taylor’s strength on the defensive end.

Derrick Walton didn’t shoot the ball well on Saturday afternoon, but he controlled the game. 6-foot point guards aren’t supposed to flirt with a triple-double as often as Walton manages to. He finished with 13 points, 10 rebounds and seven assists in the win and had a number of highlight passes that led to free throws or layups.  He also made critical plays late in the game with his passing ability in transition and ability to burst into the lane at the end of the shot clock.

Michigan stretched its lead to 17 points midway through the second half and appeared to be on its way to an easy victory, but a burst of three-pointers from the Nittany Lions cut the lead to 5 with under 5 minutes to play. But the Wolverines had the answer as Duncan Robinson scored on a driving layup, his first basket since early in the first half, and Derrick Walton threaded the needle on a one-handed bounce pass to Muhammad-Ali Abdur-Rahkman to push the Wolverine lead back to 9 with 3:56 to play.

After a Penn State timeout to quell the Michigan run, the Wolverine defense buckled down and forced a shot clock violation to seal the win.

On a night where Michigan couldn’t hit a three — the Wolverines were just 6-of-20 from long range — the interior game was clicking. Michigan scored inside on an array of isolation drives, pick-and-roll passes, drop-offs and transition layups and shot 15-of-23 within 5 feet on the night and also got to the free throw line far more often than the Nittany Lions.