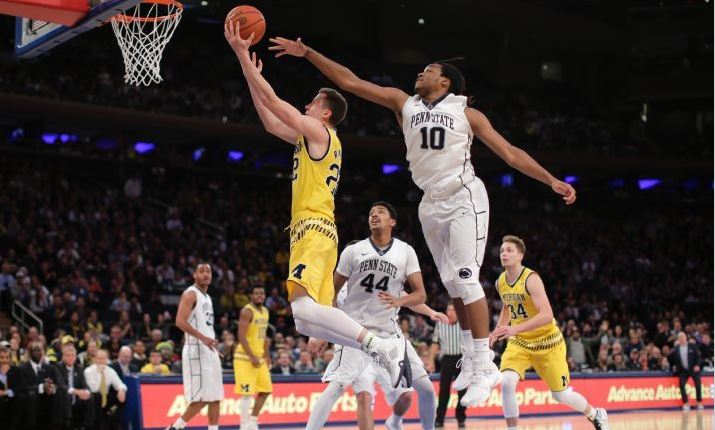 The Wolverines led from wire-to-wire, extending their lead to as much as 17 points in the second half, but the Nittany Lions brought the game to two possessions in the final five minutes — finally bringing the Garden to life with some hot shooting down the stretch. Michigan had to sweat out the win, but in the end the Wolverines moved to 7-2 in the Big Ten season and remain firmly in the thick of the conference race.

Michigan’s offense hummed along to the tune of 1.19 points per possession despite making only one three-point shot in the second half. This game hinged on the Wolverines ability to get to the basket and score at the free throw line. Michigan attempted 31 free throws, knocking in 23 of them, and made 19-of-35 two-point attempts. For a team that attempts 46 percent of its field goals from three-point range, the Wolverines had a rare game where they attempted nearly two-thirds of their field goals inside the arc and attempted over 50% as many free throws as threes.

One notable adjustment to the offensive game plan, the Wolverines looked to push more often than normal. Derrick Walton had a couple terrific transition feeds and Michigan even pushed off of made baskets at times, stealing some cheap layups. Perhaps the tweak was due to something the Wolverines saw on film against Penn State, but it could also be a new adjustment to get into offensive sets earlier with the 30 second shot clock.

Defensively, Michigan was great in the first half as it held the Nittany Lions to .88 points per possession, but struggled at times in the second. Michigan’s zone defense looks were the most important factor in the game. In the first half and early in the second, the Wolverines relied heavily on the 2-3 zone and were able to force the Nittany Lions, a team without many three-point threats, into a long range heavy approach.

Pat Chambers adjusted to the 2-3 zone in the second half, but John Beilein went to the 1-3-1 zone midway through the period and threw the Nittany Lions on their heels. Although Chambers stressed that Penn State had seen the 1-3-1 and practice against it this week, they were flummoxed and went four straight possessions without scoring a basket which allowed Michigan to open a 17-point lead.

The zone effectiveness masked the fact that the Nittany Lions scored the ball very well in the other second half possessions. Brandon Taylor and Shep Garner both went over 20 points on efficient shooting and they nearly shot Penn State right back into the game late.

If you’re Michigan, it’s hard not to feel good about yourself after winning 6 of 8 conference games without Caris LeVert. The schedule hasn’t been very difficult, but 7-2 is 7-2 especially with such a critical injury. Essentially the entire rotation has grown up over the last month, but there are still legitimate questions to be answered. The wins are great, but this team hasn’t really blown anyone out either. The last four wins over Minnesota, Nebraska, Rutgers and Penn State were all fairly close and in question late in the second half. That’s good for a team that wants to improve its ability to win close games, but it also lends some doubt to whether the Wolverines are ready to be accepted as one of the conference’s top teams.

With a recent win under Maryland in the bag, Michigan gets two more chances to build on its resume this week as it hosts Indiana and Michigan State. As for Caris LeVert, John Beilein reported that there’s a chance the 6-foot-7 senior returns to action this week.