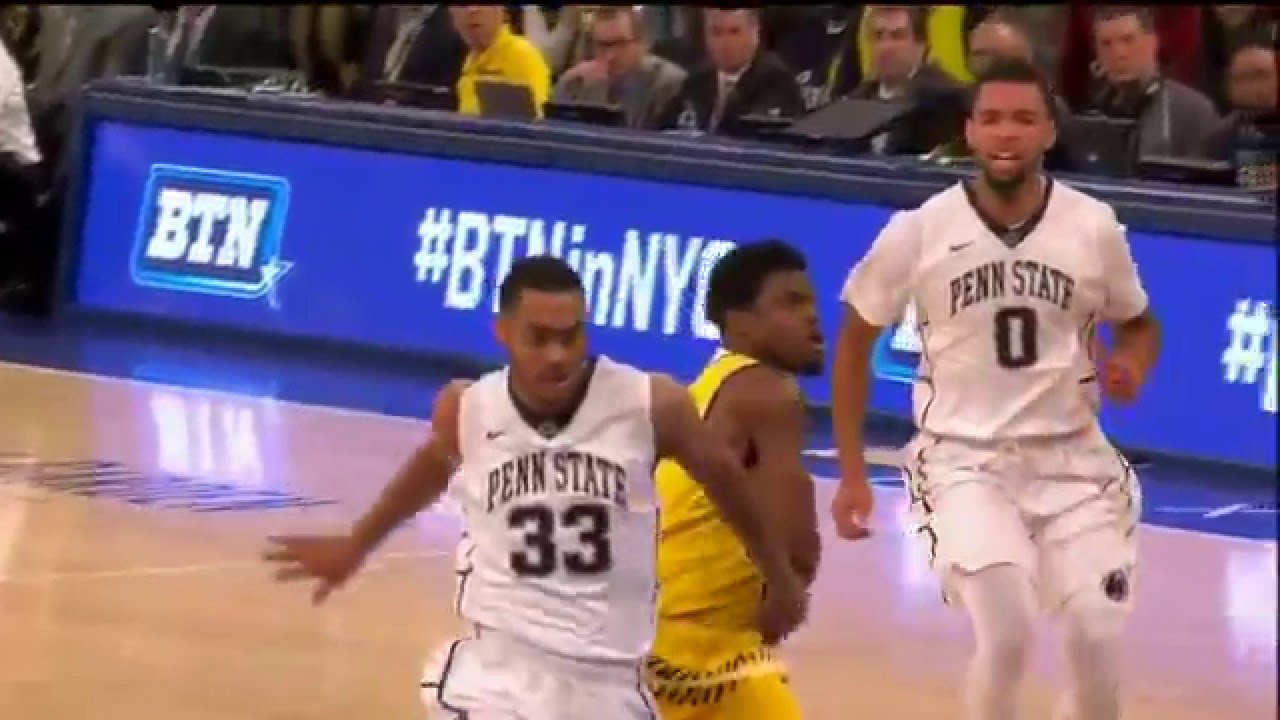 The Wolverines never trailed, led by as much as 17, and countered every Nittany Lion run with poise and ease. Here are Five Key Plays from the victory.

In the world’s business capital, the Michigan basketball team fit the mold, taking care of Penn State in Madison Square Garden in businesslike fashion. The Wolverines never trailed, led by as much as 17, and countered every Nittany Lion run with poise and ease.

There were plenty of highlights to go around in the game. Four players scored in double digits for Michigan (7-2 Big Ten, 17-5 overall), and junior guard Derrick Walton flirted with a triple-double. Here are our five key plays from the game.

Though fellow junior Zak Irvin led the team with 20 points, Saturday’s contest was the Derrick Walton show for quite a while. The guard closed out a very strong month with 13 points, 10 rebounds, seven assists and three steals.

More importantly, his rebounding, steals and sharp passing allowed the Wolverines to jump out to a lead early and maintain control throughout the first half.

“I’ve coached all these years, and never sent a guard to the backboard,” said Michigan coach John Beilein. “We would outlet … let the big boys go get the ball. If I was still doing that, I wouldn’t know what a great rebounder (Walton) is.

“I’ll tell you, there may be 6-10 guys that he can’t get, but anybody that’s below 6-8 if there’s a jump ball between them and Derrick, Derrick’s going to get it. His timing is impeccable.”

In this sequence we see Derrick Walton forcing the pace of the game as well. The Wolverines will always run off of misses and turnovers, but against Penn State we even see Walton push the ball in transition for an easy layup for Muhammad-Ali Abdur-Rahkman. Pat Chambers cited Michigan’s transition game as the biggest difference on Saturday.

The Wolverines got into a rhythm down the stretch in the first half, and had a chance to take a double-digit lead into the break. Irvin knocked down a corner three to do so, putting Michigan up 12.

“I did not draw that one up,” Beilein said. “We were going for a lob to the rim for Aubrey, and we gave up on it because they had the big guy up and couldn’t throw it over.”

The counter forced the Wolverines into a jump-ball situation, giving them a chance to try again. It still didn’t go according to plan, but it didn’t matter.

“We put Duncan in to see if he could get a shot,” Beilein explained. “But he made a really good baseline drive, found Zak and that ended up being a big shot in this game.”

Michigan only made six threes in the game (compared to 14 the last time the two teams met four weeks ago), but Irvin’s shot at the halftime buzzer gave the Wolverines a much-needed cushion.

3) Irvin attacks off the bounce in the second half

When it became clear the Michigan’s 3-point attempts weren’t falling at the same rate as usual, it had to adjust its gameplan.

It did so with strong drives, and Irvin shouldered most of that challenge. Getting to the line 31 times, more than any other time this season, Irvin and the Wolverines showed they can play hard-nosed basketball, too.

“We’re going to take what people give us,” Beilein said. “We’re still scoring points, finding new things to do, but the emphasis has been to take the ball to the basket on the big guys.”

With Penn State looking to negate Michigan’s 3-point shooting by switching screens and overplaying the perimeter shot, the Wolverines scored 28 points via layups on Saturday.

“We’re seeing something different every day,” Beilein said. “It’s something we need to continue to tweak and find answers for.”

With the Nittany Lions showing signs of life in the second half, Michigan switched to the 1-3-1 zone on defense. The results paid dividends, and Penn State went 3:29 without scoring after the switch, and coughed up three turnovers in the process.

“Give them credit,” said Penn State coach Pat Chambers. “That 1-3-1 stifled us for a bit there, and we faced a ton of 1-3-1 early on, and I was a little surprised that we didn’t attack it the way we used to.”

Chambers noted that they practiced for the scheme for much of the week, and was surprised it took so long to figure out in the game. Penn State eventually made another run, but being thrown off rhythm midway through the second half put a substantial damper on any comeback hopes.

The 1-3-1 zone is especially effective because when it works it usually forces turnovers which result in quick, easy offense on the other end of the floor.

5) Michigan closes it out in crunch time

Thanks to strong shooting performances by Shep Garner and Brandon Taylor, Penn State was within single digits with less than five minutes to go. But Michigan, growing accustomed to closing games out down the stretch even without its two seniors, was there for the dagger.

The Wolverines went on an 8-2 run, giving them the space they needed to seal a win.

“These last four games have all been around single digits with about four minutes to go, so we needed big baskets during that time to win,” Beilein said. “You’ve got to be able to finish at the foul line, execute your press breaker, so I felt very good down the stretch. … We’re getting a rhythm right now of how to play at that time.”

First Duncan Robinson scores off of a driving layup setup by a simple dribble hand off. Robinson had a quiet game and made only 1-of-5 three-point attempts, but still had to confidence to attack the rim off the bounce.

On the ensuing possession, Walton finishes the job. First he high points a long rebound before starting the quick fast break and threading the needle with a beautiful one-handed pass to Muhammad-Ali Abdur-Rahkman to extend the Wolverines’ lead back to nine.