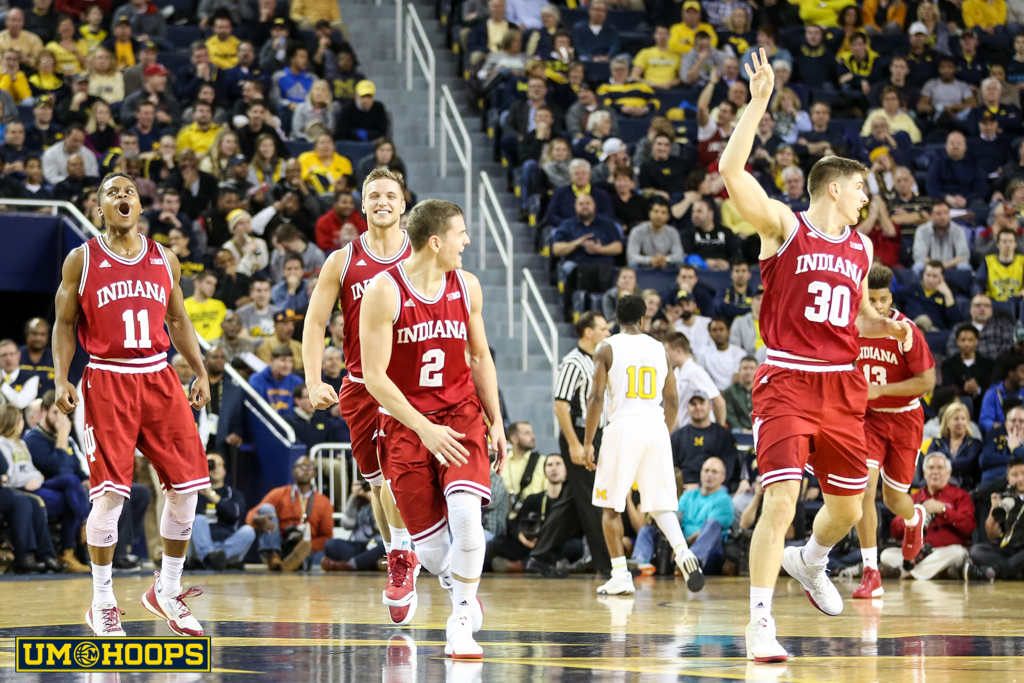 With celebrities from near and far joining an already-full house at Crisler Center on Tuesday night, the Michigan basketball team looked poised for a star-studded performance against No. 22 Indiana.

The Wolverines even looked the part in the opening 5:29, outscoring and outplaying the Hoosiers while jumping to a 15-4 lead. From there, things got hysterically ugly.

Here are our instant takeaways from the Tuesday night thrashing.

MVP: Yogi Ferrell. Indiana’s guard and All-American candidate looked the part Tuesday, waltzing all over Michigan’s defense to an easy 17 points and nine assists. Ferrell played the game on another level after Tom Crean called him out during a timeout midway through the first half and Indiana never looked back. In addition, Ferrell showcased plenty or defensive fortitude, holding junior guard Derrick Walton Jr. to just seven points on 3-of-10 shooting.

It was over when… It is probably a safe bet to say that no team has ever won after giving up 28 consecutive points, and that remained true on Tuesday. Beginning at the 9:05 mark in the first half, the Wolverines could not create or stop anything on either end of the court, shooting 0-for-13 from the field while the Hoosiers knocked down 11 of 14 in the same stretch.

Key Stat: One area that is usually a strength for the Wolverines has quickly become a weakness. Michigan shot 6-of-21 from 3-point range, and is now 12-of-41 (29.3 percent) from deep in its last two games. The cold shooting compounded Michigan’s offensive problems in a hurry and allowed the Hoosiers to pull away.

Room for improvement: Not to beat a dead horse, but 28-0 runs should never happen to a team that plans on winning basketball games like Michigan does, and leaves plenty of room for improvement. With senior guard Caris LeVert still out indefinitely, the Wolverines must find ways to create on offense against good defenses, and be able to contain playmakers such as Ferrell.

Much of the blame can fall on Irvin and Walton, who began the game a combined 4-of-18 from the field with five turnovers before the game was officially a blowout.