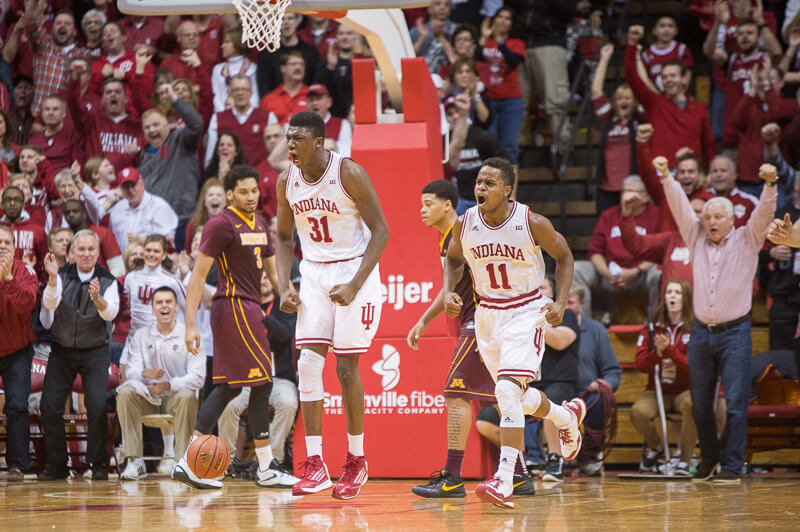 The easy part is over. We’re 21 games into the season and Michigan has avoided any bad losses and sits a game out of first place in the loss column. Michigan has held serve for this long, but the real challenges start tonight. The Wolverines start their back loaded second half of their conference schedule tonight by hosting the Indiana Hoosiers.

The easy part is over. We’re 21 games into the season and Michigan has avoided any bad losses and sits a game out of first place in the loss column. Michigan has held serve for this long, but the real challenges start tonight. The Wolverines start their back loaded second half of their conference schedule tonight by hosting the Indiana Hoosiers.

Indiana is 8-1 in Big Ten play and is the only team to play an easier conference slate than the Wolverines thus far. The Hoosiers appear to have fixed the defensive concerns that plagued them in November and December and still has the guard play, shooting and athleticism to put up points in a hurry on offense.

Big Ten opponents have shot 47% on twos (5th), 34% on threes (7th) for a 48.4 effective field goal percentage (4th). Indiana’s defense has done a good job minimizing the three-point shot, allowing opponents to attempt just 29.4% of their shots from long range. The Achilles’ heel of the IU defense has been its tendency to foul. Big Ten opponents shoot 38 free throws per 100 FGAs and Wisconsin, the lone Big Ten team to beat the Hoosiers, attempted 37 free throws in their victory.

Offensively, Indiana is scoring 1.14 points per possession, third-best in the Big Ten. For all of the criticism Tom Crean faces, he’s able to coach shot selection as well as any Division I coach. Only 20% of Indiana’s field goal attempts this season have been mid-range twos — one of the lowest percentages in the country. The math (correctly) says that those shots are the lowest expected value and the Hoosiers’ shooting efficiency proves that point. Indiana has the second best effective field goal percentage in the country (60.2%) and the best in Big Ten play (56.9%).

The Hoosiers are shooting 54.2% on twos and 40.6% on threes in Big Ten games and are the only team with a better effective field goal percentage than Michigan in the conference. Indiana is also one of the better offensive rebounding teams in the conference, grabbing 35.1% of its missed shots (3rd) in an offensive rebounding attack spearheaded by freshman big man Thomas Bryant and Michigan transfer Max Bielfeldt. If the Hoosiers could manage to stop giving the ball away, they’d be almost unstoppable. Indiana has turned the ball over on 21% of its Big Ten possessions, worst in the Big Ten.

Senior point guard Yogi Ferrell has played so well for so long that people have just seemed to forget about him. Ferrell was the starting point guard when these two teams met as No. 1 and No. 2 and when Indiana stole the Big Ten Championship at the Crisler Center. Pending Caris LeVert’s health, the Wolverines don’t have a healthy body who played in those games.

Ferrell is shooting 43% on two-point attempts and a league-leading 55% from long distance in Big Ten games. Leading the league in three-point shooting as a point guard that shoots primarily off the dribble threes above the wings is impressive. Indiana’s played an easy schedule, but it still has been missing a starter and several of its best shooters have struggled at times. There’s little doubt that Ferrell is carrying the load and is one of the best point guards in the country.

There aren’t many players in the Big Ten with more natural talent than junior wing Troy Williams. Williams is a freak athlete who shoots 52% on twos and 35% on threes in conference play. He’s a plus-rebounder, he gets to the free throw line 48 times per 100 field goal attempts, and he can easily finish above the rim. He’s also shown inconsistencies and has struggled in some of Indiana’s biggest games.

Sophomore guard Robert Johnson has stepped into an increased role in in James Blackmon Jr.’s (knee) absence. Johnson is a better defender and rebounder than Blackmon, but his offensive efficiency has regressed with more responsibilities. He’s shooting 32% from three-point range in Big Ten games and has struggled inside the arc (23%) while turning the ball over on 29% of his offensive possessions.

Junior forward Collin Hartman starts on the wing alongside Williams and the 6-foot-7, 215 pound forward is a legitimate three-point threat. He’s knocked down 48% of his Big Ten threes and has to be guarded closely on the perimeter. Nick Zeisloft comes off the bench and plays solid minutes as a three-point specialist as well. Zeisloft, 6-foot-4, 210 pounds, is shooting just 26% in conference play, but made 54% of his non-conference triples.

Freshman big man Thomas Bryant anchors the middle and has played very well this season, well enough that some have even questioned whether he’s one of the best freshman bigs in the country. Bryant has used 102 possessions on the low post and shoots an impressive 70% when he shoots in post-up situations, per Synergy Sports. He’s also a top-ten shot blocker and offensive rebounder in the conference and is shooting 73% on twos overall. Perhaps Bryant’s biggest weakness is his conditioning, as he has the tendency to lose steam on the defensive end and in the ball screen game.

Former Wolverine Max Bielfeldt backs up Bryant and the Michigan transfer has played very well for the Hoosiers. Bielfeldt is shooting 57% on twos and 36% on threes in Big Ten play and ranks third in the conference in offensive rebounding rate and second in the league in steal rate.

Indiana has had Michigan’s number of late, winning four of the last five games, but this is a big game for a Michigan team that needs to defend home court. KenPom projects a 77-74 Michigan victory in a 67 possession shootout, giving the Wolverines a 60% chance at the victory.