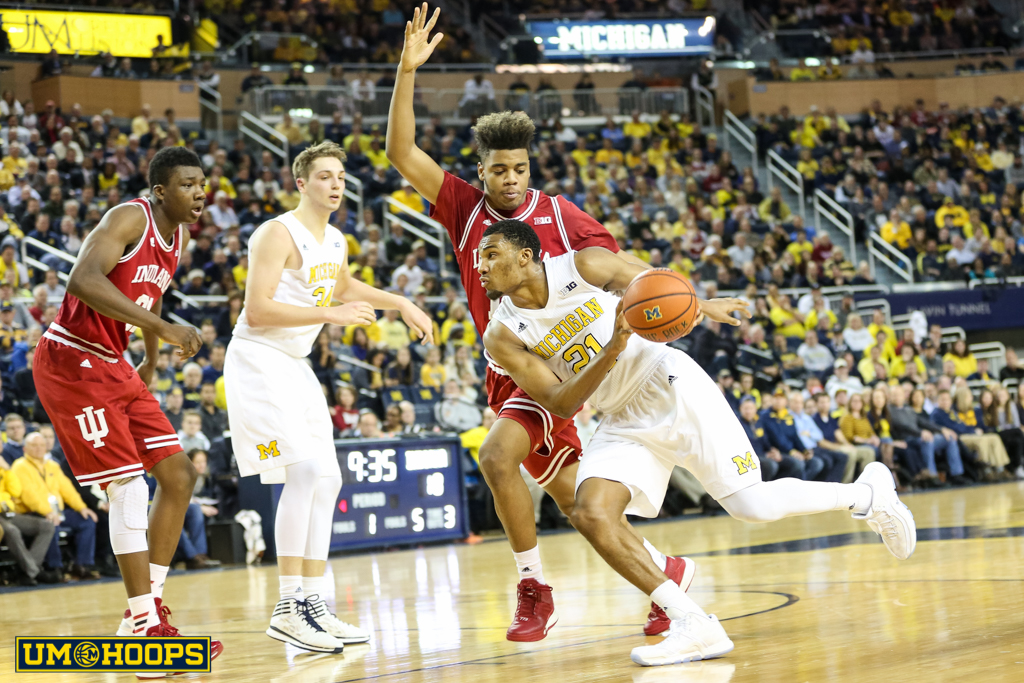 Three years ago to the day, Michigan and Indiana faced off as the No. 1 and No. 2 ranked teams in the country. Tonight, the Wolverines were beaten down on their home floor by Indiana in a double-digit home loss where the final score felt forgiving.

Three years ago to the day, Michigan and Indiana faced off as the No. 1 and No. 2 ranked teams in the country. Tonight, the Wolverines were beaten down on their home floor by Indiana in a double-digit home loss where the final score felt forgiving.

The loss was a stern reminder of just how far Michigan has to go to come close to that level again, which felt worlds away as Indiana closed the first half on a demoralizing 25-0 run.

Four players that were in Assembly Hall for that game three years ago were in the Crisler Center tonight. One was the best player on the floor, one didn’t play in that game, but had since switched allegiances, and the other two sat on the Michigan bench injured.

The Wolverines 7-2 run through the easier portion of their conference schedule was impressive without Caris LeVert, but it masked the fact that the current, healthy Michigan roster is closer to the team that lost seven out of eight Big Ten games last February and March than the one that played for championships a couple years earlier.

Indiana’s 25-0 run to close the first half — in Ann Arbor — was a damning indictment of this current team. Right now, Michigan has a team of guys that play great when things are going well, but have shown the tendency to fold when they get hit in the mouth.

Even in some wins this season, Michigan has let big leads slip away with inconsistent play on both sides of the ball. Part of that can be attributed to depth and substitution patterns — Beilein’s sometimes questionable substitutions become especially costly when there are limited options off the bench — but the issue goes beyond that.

There’s been plenty of talk about the experience, maturity and confidence that this group has gained closing out games over the last few weeks, but the simple fact is that those games were against some of the worst teams in the conference. There’s another level this team has to reach if it wants to compete in earnest in the top-half of the conference.

Caris LeVert’s eventual return will certainly help — the 6-foot-7 senior is one of the best players in the country to dial up when you need an isolation set to break a slump — but some of these problems have become a theme this season, with or without LeVert.

Michigan was held below a point per possession for the first time this conference season and the final numbers were forgiving thanks to some late-game stat padding. Indiana played very physical defense on Michigan’s drives to the rim and the Wolverines never seemed to figure out how to adjust. The threes weren’t falling for yet another game and most of them weren’t great looks. Indiana took Derrick Walton and Zak Irvin out of the game and right now if you can eliminate those two options, there’s no one else on the roster to beat you without help.

Defensively, Michigan was a disaster. The Wolverines were backcut to the death, abused off the bounce, terrible in transition and dominated for all intents and purposes. Indiana shot 64 percent on twos, 33 percent on threes and rebounded 38 percent of its misses. Nine different Hoosiers scored and it was OG Anunoby who seemed to dominate on both ends of the floor with his size, strength, hustle and defense against Zak Irvin.

Michigan was always going to lose a few games as the schedule tightens, but losing the first game of a big week in this fashion leaves a bad taste. It’s one thing to lose a heartbreaker at home, it’s something completely different to get embarrassed on your home floor. This game was reminiscent of the Iowa and Michigan State games at Crisler last season when Michigan was flat run off the floor. The good news for Michigan is that it still counts for just one game in the loss column and all will be forgotten if the Wolverines can figure out a way to come together and knock off Michigan State on Saturday.