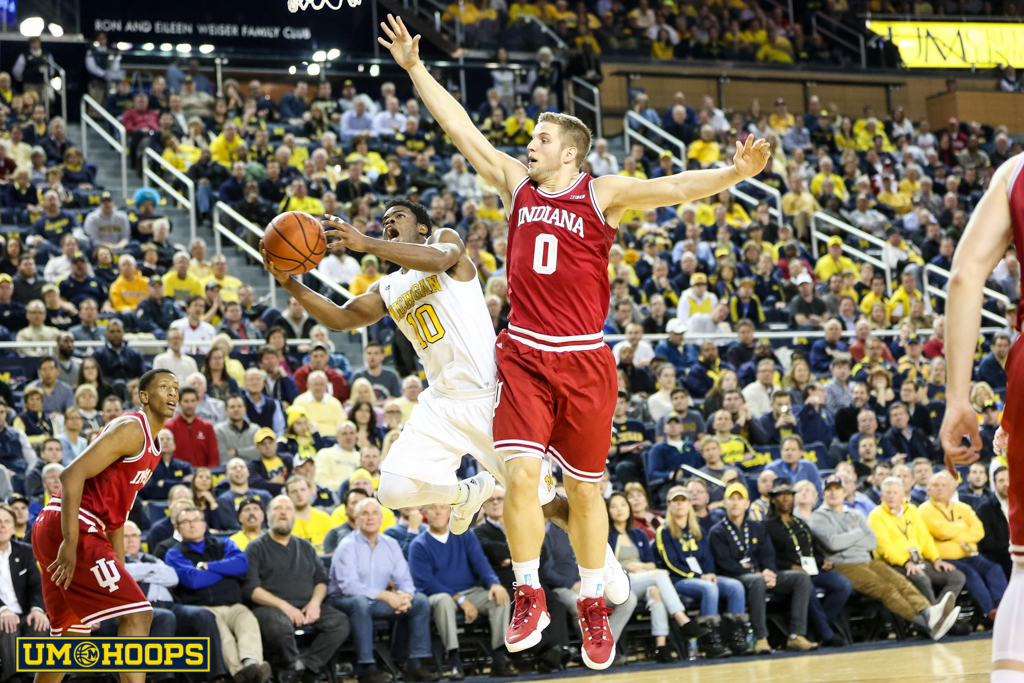 Tuesday’s game was expected to be an evenly-matched bout between two high-flying offenses, but a run as rare as any stole the show. The Wolverines collapsed on both ends, shooting 0-for-13 over more than 10 minutes while letting Indiana knock down 11 of 14 shots.

When Indiana pulled to within two of the Michigan basketball team with 8:40 to go, it was clear the Hoosiers were gaining steam. Down 15-4 just a few minutes prior, Indiana had made it a 24-22 game, hushed a star-studded Crisler Center crowd and looked in control — but was only getting started.

As the Hoosiers picked up speed, the Wolverines tried to keep pace, but quickly began to fall off the rails.

By the time Indiana had finished its staggering 28-0 run, Michigan’s performance was nothing short of a comically bad train wreck that fans couldn’t look away from.

Tuesday’s game was expected to be an evenly-matched bout between two high-flying offenses, but a run as rare as any stole the show. The Wolverines collapsed on both ends, shooting 0-for-13 over more than 10 minutes while letting Indiana knock down 11 of 14 shots.

“That’s happened so rarely it’s hard to put it into words,” said Michigan coach John Beilein of the run after Michigan’s 80-67 loss. “That run that they made turned out to be insurmountable. We feel bad about it, and we’ll watch some video to see what we can do.”

Plenty of improvements could be found in the stretch: Michigan was outrebounded 15-4, couched up three turnovers and even shot 0-3 from the free throw line. Possessions and shots looked forced on offense, and just about any and every Indiana player got a free pass on defense. Seven different Hoosiers scored during the run, and they combined to knock down nearly as many threes in the run (five) as Michigan had the entire game (six).

Instead, the biggest glaring improvement to be made is the mental makeup of a team that gave up 28 straight points to begin with. Such a run isn’t a sign of a bad team — even Rutgers and Delaware State can find buckets after a few minutes — or an incapable team, but a defeated one.

“It’s just draining when you have an 11-point lead against that team and everything’s going well, then just like that (it’s gone),” said junior forward Zak Irvin. “Basketball’s a game of runs. A (28-0) run, that’s something that none of us saw coming.”

The run unequivocally ended Michigan’s hopes of winning Tuesday, but may foretell a larger problem at hand. Only six Wolverines played during the stretch, and none of them looked ready to lead the shorthanded unit through adversity.

“We’re not mentally tough, … I think we need to get stronger in that area,” said junior forward Zak Irvin. “When shots aren’t falling, we can’t let that affect how we play on the defensive end

Added redshirt sophomore forward Duncan Robinson: “They kind of punched us and we kind of laid down, which I think is uncharacteristic of us and of Michigan in general.”

But aside from Michigan’s win over No. 4 Maryland, the sense of lying down when the game gets tougher was not unique to Tuesday. The Wolverines’ six losses have all been forgivable defeats to strong teams, but have also been double-digit games that at the very least teetered on blowouts.

Instead of stopping opposing charges in their tracks and creating momentum of its own, Michigan seems to climb aboard until the game is out of reach.

“It’s a flow sport,” Beilein said Tuesday in a familiar tone. “You don’t have a chance to huddle up all the time. We had some open shots, we missed them, they’re tremendous in transition as a team.

“All of a sudden the flow was going their way, and we couldn’t stop them.”

Indiana’s 28-0 run is almost certainly a fluke, and in all likelihood won’t be matched again by anyone in the Crisler Center or elsewhere anytime soon.

But as each basket fell for the Hoosiers and clanged off the rim for the Wolverines it was clear that it was a train wreck of a game, but the cause wasn’t an accident.

“Sometimes the other team is just damn better than you on that night,” Beilein said. “I’m not the coach who’s going to point fingers at my players.”