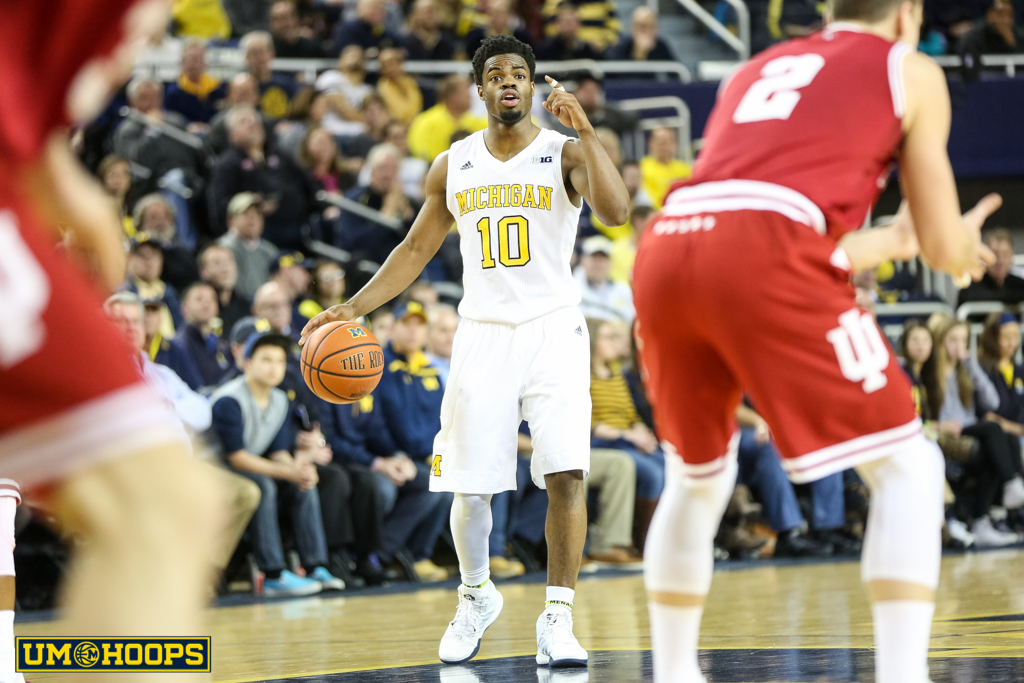 On Saturday, the Wolverines will look to put Tuesday’s disappointment behind them as they a Michigan State team playing “as good as they’ve played in the last couple years.”

It’s no secret that the Michigan basketball team left plenty to be desired in its 80-67 loss to No. 22 Indiana. Trailing by as much as 26 in a humbling defeat, the Wolverines showed major holes from top-to-bottom and on both sides of the ball.

“It just left a bad taste in our mouth,” said junior forward Mark Donnal. “We came out flat … no one wants to play like that.”

But on Saturday, Michigan (7-3 Big Ten. 17-6 overall) will have another chance to secure a signature win. The Wolverines host No. 10 Michigan State, and are fully aware they will need a vastly-improved effort to stand a chance.

The Spartans (6-4, 19-4) are among the nation’s elite on both ends of the floor, leading the nation in eFG% defense and the Big Ten in scoring defense. Michigan State is on a three-game win streak, outscoring opponents by an average of 24.7 points per game in the process.

“The way they’re playing right now, is I think as good as they’ve played in the last couple years,” said Michigan coach John Beilein. “After that Nebraska game, they have really been a great team. … Denzel Valentine at the point guard is a big issue for everybody to deal with.”

Valentine, who is averaging 18.5 points, 7.8 rebounds and 6.6 assists per game, is certainly the Spartans’ (and maybe the nation’s) top player, but Michigan State rolls out several players that provide matchup difficulties for Michigan. As a team, the Spartans spread the ball around, leading the nation by assisting on 72% of their made field goals, and both forwards Matt Costello and Deyonta Davis are garnering attention for their play down low, putting the undersized Wolverines in a corner.

“We expect them to go two-big,” Beilein said. “And we don’t have much of a choice.”

For the past half-decade, the Wolverines have relied on a four-guard look that features someone like Zak Irvin at the four position. Irvin guarding Davis is a tough sell, but Michigan’s best bet is that Irvin makes it just as difficult for Davis to guard him on the perimeter.

Michigan, which has played essentially seven players in recent games, could have some additional lineup flexibility if senior guard and leading scorer Caris LeVert returns. Though Beilein was mum on LeVert’s status for tomorrow, he did note that the senior had a strong practice on Thursday, and could be getting back into game shape.

Simon Kaufman of The Michigan Daily cited sources saying that LeVert could play against Michigan State.

According to a few people who have talked with LeVert, he said he will most likely be back for tomorrow's game against Michigan State.

But with or without LeVert, the Wolverines will look for extra effort to keep up with the Spartans.

Michigan State has seen its ups — reaching No. 1 in the country after running the table in the non-conference slate — and downs — losing four of its first seven Big Ten games — but appears to be peaking once against as the calendar rolls into February.

“They probably execute their offense and their defense as good as anybody in the country,” Beilein said. “You’ve got to match that. You’re not going to get any easy shots, and you’re going to have to guard for (30) seconds the best you’ve ever guarded.”

Beilein focused on the structured nature of Michigan State’s offense and the challenges that poses for the defense. The Spartans have terrific shooters and screeners and run some of the best set-plays in the Big Ten.

“This team has a regiment of they run their stuff really really well,” Beilein explained. “It’s not Princeton-like, but you have to take that approach to preparing for it because, (every possession) here’s the play, here’s the secondary play.”

Though there are plenty of games remaining on the schedule, this is the only matchup with Michigan State on the schedule and there are few things that can galvanize a season more quickly than a win over the Spartans. Under John Beilein, Michigan has never failed to make the NCAA tournament when it beats the Spartans and the Wolverines are 6-4 against Michigan State in NCAA tournament seasons.

The Wolverines left plenty to be desired on Tuesday, in arguably their most disappointing performance of the season, but have a chance to redefine their season with a win over their in-state rivals.

With everything on the line on Saturday in a nationally televised face-off with the Spartans, junior guard Derrick Walton Jr. — the lone in-state scholarship player on the roster — reiterated that there won’t be any extra motivation required.

“No one needs to be hyped up for this game tomorrow, pregame speeches, none of that is going to help,” said Walton, who is looking for more than his seven points against the Hoosiers. “The intensity, when the ball tips up, you’re going to be able to feel the intensity.”