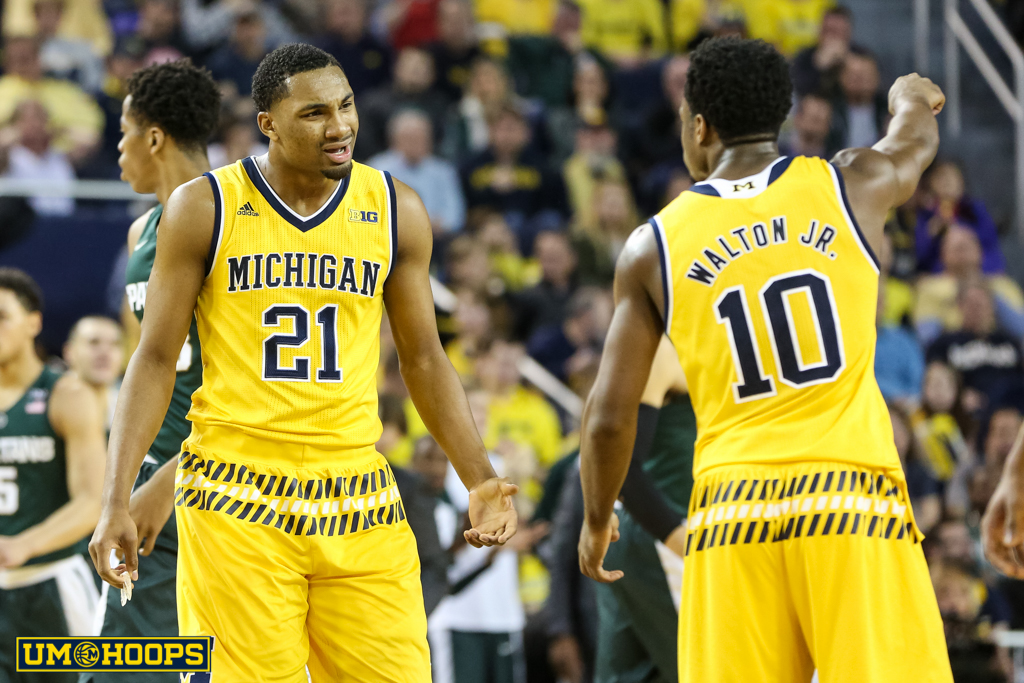 After a successful January, the Michigan basketball team managed to pour out every ounce of momentum it had on the Crisler Center court less than a week into February.

After a successful January, the Michigan basketball team managed to pour out every ounce of momentum it had on the Crisler Center court less than a week into February.

In back-to-back blowout losses, the Wolverines went from borderline Big Ten title contenders to the NCAA Tournament bubble watch in a matter of days. Empty possession after empty possession highlighting a handful of issues.

Everything was set up for Michigan, too, but it didn’t matter: A packed arena, national TV coverage, ranked but flawed rivals that could pad the Wolverines’ resume. In fact, the only thing that didn’t show up was Michigan’s pulse.

The Wolverines were on the tail end of high school-type runs (28-0 against Indiana, 26-6 against Michigan State), and looked broken as a top-50 team could look on both offense and defense.

“You’ve got them laughing at us on our own home court,” said junior forward Zak Irvin. “These past two games, teams have just punked us.”

In addition to missing on the signature wins they needed, the Wolverines (7-4 Big Ten, 17-7 overall) are now scratching and clawing for answers months after those answers were supposed to be in place.

Though not ideal, Michigan’s desperate search for answers lends to a few diagnoses. After Saturday’s game, Michigan State coach Tom Izzo excused his colleague and Michigan coach John Beilein, noting that teams can become inconsistent without senior leaders to provide heart (Spike Albrecht and Caris LeVert remain sidelined with injuries); players such as Irvin openly discussed a lack of mental toughness and courage on the court; Beilein shut down both theories, instead citing a lack of basketball abilities and brainpower to stay in games.

As absurd as it seemed just a few days ago, all three are correct. Through depth, skill and consistency, Michigan experiences a substantial dropoff without LeVert. The Wolverines looked out of both games as soon as the wheels began to fall off and the Spartans looked superior against every defensive set or offensive effort Michigan tried out.

“We’ve got to get better,” Beilein said. “We just have to get better through improvement, maturation, through our guys getting older and avoiding injuries. Then we can play. It’s really hard right now against teams like this.”

Added Irvin: “We just really need to do some soul searching and get back on track. It’s been a tough week for us. No one is going to feel sorry for us.”

Poor timing can also be added to the list of Michigan’s woes. The Wolverines don’t get much time to find answers, and still have games against No. 4 Maryland, No. 5 Iowa and No. 18 Purdue and road bouts against Ohio State, Wisconsin and Minnesota.

A home game against Northwestern theoretically provides a cushion, but after the Wolverines’ performances against the Hoosiers and Spartans, no games are gimmes anymore.

“This is going to be a real test of our guys and how tough we are,” Beilein said of the final stretch of the season. “What we’re going to do and, win or lose, how we’re going to grow from it.”

Michigan is as lost as ever at an inconvenient time to be lost, and needs to find the way out before the season falls apart.

For better or for worse, it doesn’t have a way out. It has three.

“You get knocked down, and now somebody just stepped on your head, what are you going to do?” Beilein said. “We’re going to have to work hard and get that back.”