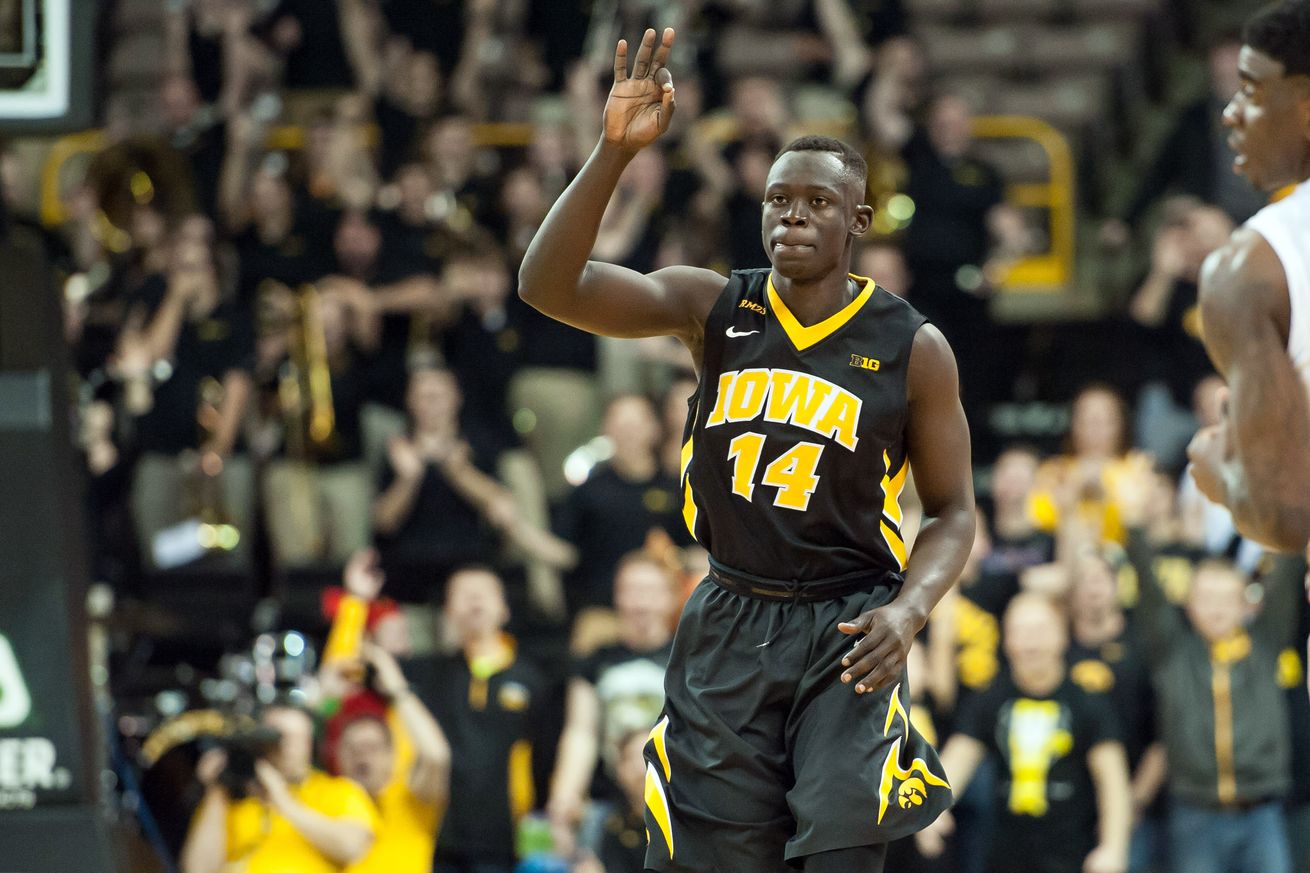 Iowa is the class of the Big Ten. Not only do the Hawkeyes lead the conference in win-loss record, they have the league’s best efficiency margin and have played a stronger schedule than any other team in the top nine spots of the standings.

Jarrod Uthoff continues to play Big Ten Player of the Year caliber basketball, but Peter Jok has also been playing at an All-Big Ten level. Fran McCaffery loves to setup Jok to shoot the ball off of off-ball screens. Jok averages 3.5 shots per game off of screens, more than anyone in the Big Ten other than Michigan State’s Bryn Forbes.

Early on this year it looked like Maryland might have made a big leap offensively, but as the conference season wears on it’s clear that the Terps are really just a much better version of the team they had last season. Mark Turgeon’s group still isn’t great offensively — ranked 7th in the league at 1.07 PPP, up from 10th last season — but it is elite defensively. The Terps have the best defense in the Big Ten, allowing opponents to score just .95 points per possession and shoot just 44.2% on twos (2nd) and 27.2% on threes (1st) for a meager 43.2 eFG% (1st).

What does that lockdown defense look like? A lot of cold zones. Here’s Maryland’s Big Ten-only defensive shot chart.

Bryn Forbes has been out of this world over the last few weeks and when Forbes is clicking, Michigan State is clicking. The 6-foot-3 senior has made 21 of his last 31 3-point attempts over Michigan State’s last four games — all comfortable victories. In the three losses before that stretch, Forbes was just 3-of-15 from long distance.

Forbes has been steadily climbing the leaderboards at ShotAnalytics and now trails only Buddy Hield in the total points above expectation metric which compares his production to the expected value of his shot attempts.

Playing on the road is never easy and the Hoosiers followed an impressive road win at Michigan with a disappointing loss at Penn State. Indiana looked like a Big Ten title contender, but it has a lot of work left to accomplish with two games against Iowa, a trip to East Lansing and home games against Purdue and Maryland still on the schedule.

For Indiana, the key is transition. The Hoosiers run more than any team in the Big Ten and Penn State was able to eliminate some of that transition push while Michigan was not.

Purdue hasn’t really been able to dominate the Big Ten in a way that many thought they were capable of. Halfway through the season the Boilermakers’ best conference win is either Michigan at home or at Wisconsin — decent wins, but nothing to brag about as a Big Ten contender.

The Boilermakers have been the best rebounding team in the Big Ten by a wide margin, but they’ve failed to stand out in any other notable statistics.

With five wins in a row, Wisconsin is the hottest team in the Big Ten that no one seems to be talking about. The interesting thing about the Badgers is that they are winning games by dominating two of the same stats as the league-leading Hawkeyes: turnovers and free throw rate. Iowa leads the league in offense-defense differentials between both of those stats, but the Badgers are right behind.

After feeling pretty good about itself with a 7-2 record essentially without Caris LeVert, the wheels fell off this week in Ann Arbor with a pair of home blowouts. A big reason for Michigan’s struggles was its horrific transition defense. Michigan allowed 41 points in 34 transition opportunities during its two home losses — that’s 1.21 points per possession in 17 possessions per game, far worse than its season averages of 9 possessions per game and 1 point per possession.

Michigan is down to 13th in the conference in eFG% defense and the defensive shot chart from Big Ten games only is ugly. It’s obvious that teams are getting into the paint for easy twos and they are hitting open threes.

According to the efficiency numbers, Nebraska is right in line with Michigan, but it still sits two games back in the loss column. Nebraska has one of the best wins of the conference season (at Michigan State), but its other four league wins are over Rutgers (2x), Minnesota and Illinois. Stealing a game at Wisconsin on Wednesday could be what Tim Miles needs to spark some momentum down the final half of the schedule.

Kudos to Pat Chambers and the Nittany Lions for keeping their heads down and finally coming up with a big win. Penn State has played the most difficult Big Ten schedule to date and a win over Indiana could provide the spark of momentum it needs to finish the season strong. There are plenty of winnable games left on the schedule with Rutgers, Nebraska (twice), Northwestern and Illinois still ahead.

Northwestern still has plenty of winnable home games left on the schedule, but the 4-7 start has deflated any and all momentum from its 12-1 non-conference start.

When a three overtime win over Rutgers is the best news over the last couple weeks, it has been a long season.

There were real signs of progress as Minnesota lost five straight games by single digits in January, but a road trip to Evanston was less forgiving as the Wildcats beat the Gophers by 24

The KenPom probability that Rutgers completes a winless Big Ten season is up 19.1% after the Scarlet Knights dropped a triple-overtime game to Illinois last week.