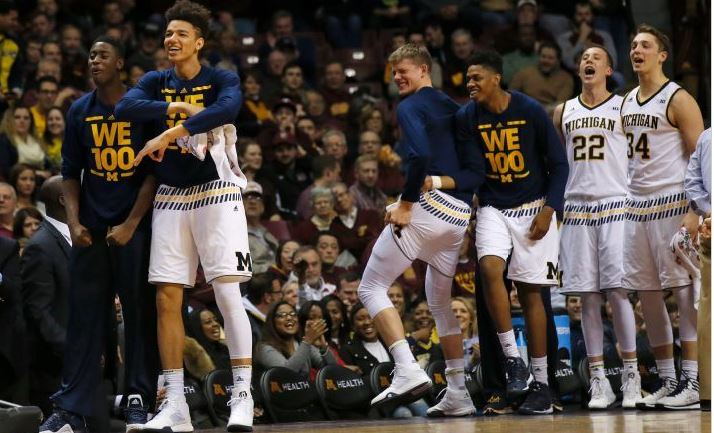 Michigan got a career game out of its point guard, made 56% of its threes and had valuable contributions off the bench, but still needed to sweat out a road victory over Minnesota (6-18, 0-12 Big Ten).

Michigan got a career game out of its point guard, made 56% of its threes and had valuable contributions off the bench, but still needed to sweat out a road victory over Minnesota (6-18, 0-12 Big Ten).

The Wolverines led throughout much of the first half and stretched their lead to 19 midway through the second, but took their foot off the gas late after a pair of Duncan Robinson triples seemed to put the game to bed. Minnesota responded with a 19-4 run powered by Wolverine turnovers to cut the lead to just two points in the final minutes.

Muhammad-Ali Abdur-Rahkman supplied the answer for the Wolverines, finishing a three-point play on a driving layup through contact and following that up with a great defensive play to turn a Gopher fast break into a turnover.

Any win is a step in the right direction for the Wolverines (18-7, 8-4 Big Ten) after such a deflating week, but the bottom line is that this is probably as good as Michigan is without Caris LeVert. This team has an offense capable of putting up points in a hurry, but just doesn’t have the depth or talent to put teams away — especially on the road — or compete consistently with some of the league’s best. This game showed the same late comeback and scramble to hang on trend that we’ve seen consistently away from home, most recently against Penn State and Nebraska.

Michigan’s offense finally snapped out of its slump, scoring 1.21 points per possession as essentially every Wolverine other than Zak Irvin had an impressive offensive game. The Wolverines were on fire from three-point range and found more unsettled opportunities in transition than they have in weeks. The ball moved (17 assists on 28 makes), the shots fell (67 eFG%) and everything seemed to be going swimmingly until things started to fall apart on the defensive end.

Michigan’s defense also had some decent moments for early stretches of the game, but completely unraveled late as the Gophers started to attack the rim and get to the line. Early in the second half the Gophers gashed Michigan inside, posting the ball to Jordan Murphy, and late they started clicking off the bounce.

Nate Mason’s quickness was a major problem once again. In the first half, Mason and Joey King were able to exploit Michigan switching the ball screen action with Mason beating Irvin off the bounce and King using his size to score inside against Walton. The Wolverines cleaned up that switch in the second half and played more 2-3 zone defense, but Minnesota wore down the Michigan defense and found plenty of easy layups and free throw opportunities late.

On the night, the Gophers managed to score 1.09 points per possession despite shooting just 4-of-19 (21%) from three-point range — the first time they surpassed a point per possession in the last nine games.

This was a win that Michigan had to have because the opposite result would have been backbreaking. The Wolverines got the victory and won’t worry about style points, but they’ll need to build on it ahead of Saturday’s date with Purdue. The Boilermakers just knocked off Michigan State for their best win of the Big Ten season and will have plenty of momentum heading into Ann Arbor as Caris LeVert’s status remains a mystery.