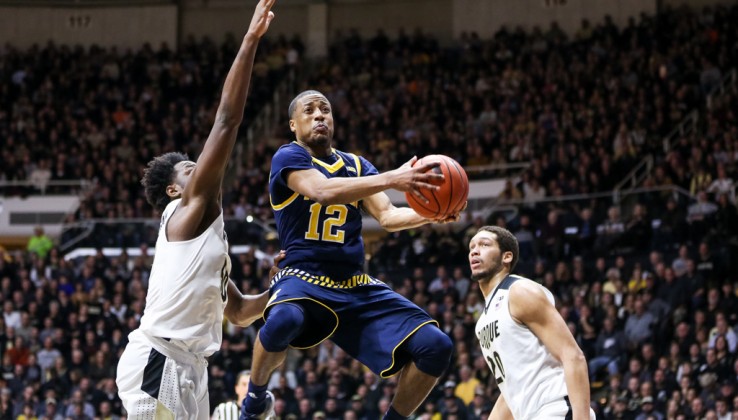 Another home game, another top-25 team. Michigan has a chance to make up for its last two deflating home losses and kick start its season heading into the home stretch against a Purdue team that accomplished a similar feat with a statement victory over Michigan State on Tuesday.

Another home game, another top-25 team. Michigan has a chance to make up for its last two deflating home losses and kick start its season heading into the home stretch against a Purdue team that accomplished a similar feat with a statement victory over Michigan State on Tuesday.

This will be the second meeting between the Wolverines and Boilermakers after Purdue cruised to a straightforward victory at Mackey Arena in early January. In a year that’s seen plenty of calamitous defending, Michigan played its worst defensive game of the season in West Lafayette. That was the Wolverines’ second game without Caris LeVert, Saturday could be their 12th.

In Monday’s Power Rankings, I wrote that Purdue doesn’t really stand out in any statistic other than rebounding. They responded and beat Michigan State in overtime in one of the most exciting games of the year. Even after that statement win, Purdue doesn’t rank better than 6th in any of the four factors on either side of the ball other than offensive and defensive rebounding — where it leads the conference.

Offensively, Purdue lives off of interior play and offensive rebounding. The Boilers are scoring 1.10 points per possession in Big Ten play, sixth best in the conference. They have a pass-heavy attack that assists on 62.3% of made baskets (2nd B1G), but only 32.6% (11th B1G) of their field goal attempts are threes. Purdue shoots 50% inside the arc (5th) and 35.4% outside (6th) for a 51 eFG% (8th). Turnovers have also been a concern for Purdue, giving the ball away on 18.1% of its Big Ten possessions — 12th in the conference.

Purdue is still ranked in the top ten nationally in adjusted defensive efficiency, but has settled in 5th in the Big Ten in points allowed per possession. The Boilers haven’t forced many turnovers (on just 14% of opponents’ possessions) and have been just average defending opponents’ shots. Big Ten foes are shooting 47.2% on twos (5th) and 35% on threes (8th) for a 48.9 eFG% (6th). They’ve also allowed 32 free throws per 100 field goal attempts, just 7th best in the Big Ten.

Michigan just barely (1.04 PPP) topped a point per possession in the first meeting despite a Herculean game by Muhammad-Ali Abdur-Rahkman (25 points on 16 shots) and 41% three-point shooting. Wolverines other than Abdur-Rahkman made just 4-of-23 two-point attempts in that game — a sign that Purdue’s shot blocking might be a major concern.

Purdue gashed Michigan inside with the post combination of AJ Hammons (17 points on 9 shots in the first meeting), Caleb Swanigan and Isaac Haas. Hammons is a dominant big man who has grown up over the last four years. He’s far more consistent and is shooting 59% on twos this season while ranking third in the Big Ten in shot blocking. Haas is an almost unfair backup center option as he can come in and provide even more size and physicality.

Swanigan is more of an enigma. He’s had an offensive rating under 100 in 9 of 11 Big Ten games and a quarter of his shots are three-point attempts and he shoots just 17%, missing his last 10 attempts. Swanigan is still a tough matchup for Michigan given his size at the four position, but he’s shown the tendency to drift on the perimeter and even up that would-be disadvantage.

Senior guard Rapheal Davis is the best defender in the Big Ten by a wide margin. Give Davis a defensive target and he’ll eliminate them from the game. In the first meeting between these two teams that target was Duncan Robinson. Davis is also a sneaky-good shooter, making 6-of-8 three-pointers against Michigan State earlier this week, but only making 10 of his first 34 threes in Big Ten play.

Sophomore forward Vince Edwards is the sort of glue-guy playmaking stretch four that Michigan’s roster so badly needs. He’s one of Purdue’s best passers, he hits free throws and shoots 46% on twos and 42% on threes. He’s incredibly versatile and can play the three or four for the Boilermakers while guarding multiple positions.

Sophomore point guard PJ Thompson has the best offensive rating in the Big Ten thanks to his stellar assist-to-turnover numbers and 43% three-point shooting. However, he sprained ligaments in his right foot against Michigan State and is in doubt for Saturday’s game.

6-foot-3 transfer guard Johnny Hill would likely see an up-tick in minutes if Thompson were to sit. Hill is more turnover prone and not a perimeter threat (0-of-3 all season), but he is a great slasher and driver who gets to the free throw line, defends and can finish in the lane.

Purdue also has a trio of so-called designated perimeter shooters in Dakota Mathias, Kendall Stephens and Ryan Cline. Mathias hit two in Michigan’s loss in West Lafayette and has emerged as the most consistent of the bunch, making 40% of his Big Ten threes, while Stephens (28% 3pt) and Cline (33%) haven’t seen quite as much success. All three have to be guarded strictly as shooters — no help or doubling down — because they put up a high volume of perimeter attempts.

KenPom projects a narrow 72-71 Purdue victory, giving Michigan a 46% chance at the home upset. It’s hard to muster confidence after a trying couple of weeks for the Wolverines, but a win would go a long ways toward pushing Michigan into the NCAA tournament for good and providing life for a limping season.