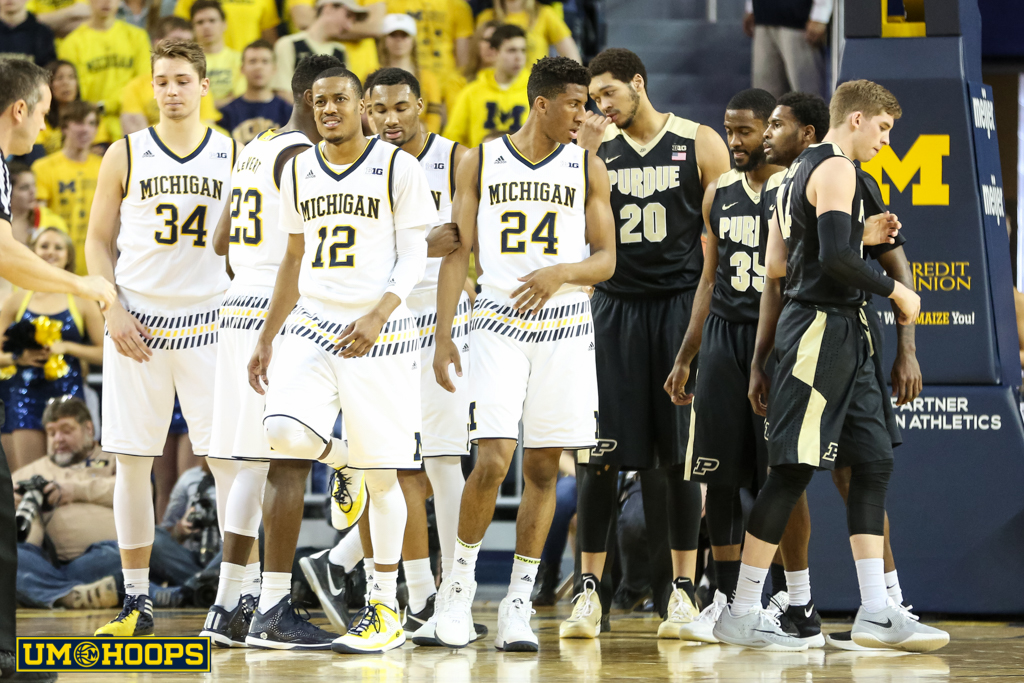 Despite all that went wrong for the Michigan basketball team Saturday, it left Crisler Center with a win it desperately needed.

Despite all that went wrong for the Michigan basketball team Saturday, it left Crisler Center with a win it desperately needed.

Michigan ran into foul trouble early and trailed by as much as 10 in the first half, and shot just 25 percent from 3-point range, but pulled off a come-from-behind win over No. 18 Purdue.

When the Wolverines (9-4 Big Ten, 19-7 overall) trailed for much of the game, it appeared that the game’s biggest highlight came with 12:59 to go in the first half, when senior guard and leading scorer Caris LeVert checked in for the Wolverines for the first time since Dec. 30 against Illinois. LeVert’s presence was minimal in the game (one assist, four rebounds, zero points in solely first-half action), and he didn’t play in the second half, but was a positive sign for the Wolverines moving forward.

The second half was similarly abysmal for Michigan’s offense, but the Wolverines were able to clamp down on defense. In a game where junior guard Derrick Walton Jr. missed his first nine shots and redshirt sophomore forward Duncan Robinson failed to make a 3, the Wolverines were bailed out by Zak Irvin before the Walton found his groove to close out the game late.

Here are our instant reactions from the win.

MVP: Zak Irvin. After struggling mightily in Michigan’s win over Minnesota on Wednesday (1-of-8 shooting for four points, two rebounds and three assists), Irvin brought his A-game Saturday. The junior guard led the team with 22 points, including four of the Wolverines’ five made 3-pointers. Irvin had to battle against Caleb Swanigan defensively, but this time he was able to take advantage of the matchup on the other end of the floor and force Swanigan to guard him. For the most part, Michigan was able to do little on offense, but Irvin’s play ensured Michigan never fell behind too much.

It was over when… With four seconds to go, Walton scored just his fifth and sixth points of the game to put Michigan up five and give the Wolverines their third win over a team currently ranked in the top 25. Michigan closed the game on an 11-0 run after trailing by six inside the final four minutes.

Key stat: Michigan beat Purdue on the glass. The Wolverines rebounded 28 percent of their misses and held the Boilermakers to just a 21 percent offensive rebounding percentage. The rebounding effort helped spark Michigan’s best defensive performance in weeks, holding Purdue to just .92 points per possession, and allowed it to survive a 2-of-20 drought in the second half.

Unsung hero: Derrick Walton. After tallying a career-high 26 points against Minnesota on Wednesday, it took 38 minutes of game action for Walton to get on the board Saturday. But once he did start scoring, Walton made his presence known. in addition to key rebounds down the stretch, Walton scored a critical driving layup in Michigan’s decisive run and was there to ice out the Boilermakers with game-clinching free throws in the final minute.

The junior guard’s ability to stay positive despite the 0-for-9 start from the field may have been the key to Michigan pulling off the upset win.