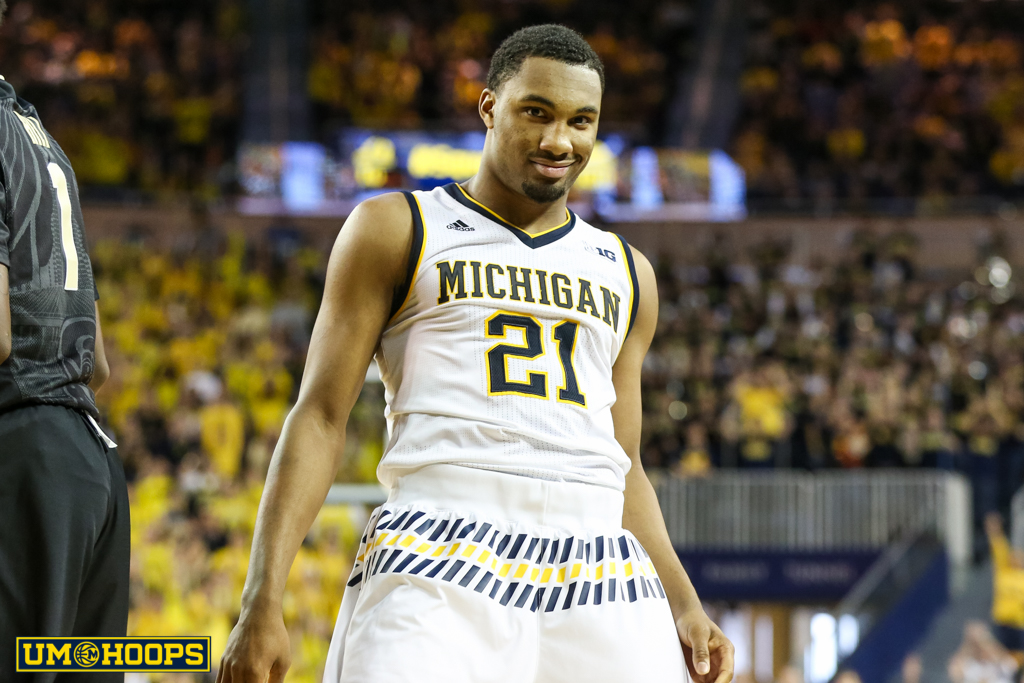 Michigan used a rope-a-dope effort to knock off No. 18 Purdue on Saturday afternoon in Ann Arbor.

Michigan used a rope-a-dope effort to knock off No. 18 Purdue on Saturday afternoon in Ann Arbor.

The Wolverines had Caris LeVert back in the lineup for limited minutes, but he wasn’t the story. The story was that Michigan beat Purdue at its own game.

Purdue grinds teams up in the post and overwhelms them on the backboard. Michigan has been beaten up in the post and dominated on the glass in most of its losses this season. The outcome of this game felt inevitable, in part because we’d already seen it once after the Boilermakers gashed the Wolverines for 1.29 points per possession in the first meeting.

But the Wolverines flipped the script and were able to control the glass on both ends of the floor and outscore Purdue in the paint. Despite that accomplishment, for 37 minutes it appeared that the spirited defensive and rebounding effort would be for naught.

The Wolverine offense had stumbled over itself for most of the game, missing 18 of 20 shots during one stretch, and when AJ Hammons hit an 18-footer with 3:13 to play stretched Purdue’s lead to six points the margin felt almost out of reach.

Michigan had one more answer as its junior guards took over in winning time. Zak Irvin and Derrick Walton (who hadn’t made a shot before the late run) combined to score the last 11 points of the game, turning a likely loss into a gutty victory.

This Michigan team (without a full-strength Caris LeVert) tends to come down to Zak Irvin. I’ve mentioned Irvin as a key in almost every game preview, but especially in both Purdue games. Caleb Swanigan defending him should be just as big of a mismatch as Irvin defending Swanigan. For the first 50 minutes or so that these two teams played this season — it wasn’t. Irvin was awful in the first meeting and awful for most of the first half today. In the second half, he took over the game.

Irvin’s teammates were just 1-of-12 from three-point range as he made 4-of-8 triples. Michigan’s 41 effective field goal percentage was among its worst shooting nights this season as it shot just 43% on twos and 25% on threes.

There’s not a lot to love about Michigan’s offensive performance, but it figured out a way to get just enough from the rest of the roster. While only Irvin reached double figures, so many players off the bench came in and gave just enough including Ricky Doyle, DJ Wilson, Kameron Chatman and Aubrey Dawkins. The Wolverines also rebounded 28% of their misses and while that number isn’t huge, they scored 11 critical second chance points.

Defensively, I loved the decision not to double-team Purdue’s bigs. There were some wrinkles, but they had more to do with playing sagging defense in some other spots rather than a hard double teaming. Purdue’s trio of bigs got their points at times —  35 points on 30 shots — but the single coverage kept the rest of Michigan’s defense in shape rather than chasing around recovering to help after doubling down. That decision limited Purdue’s three-point attempts (6-of-12) and also played a big part in Michigan’s ability to contain Purdue’s offensive rebounding — Purdue’s 20% offensive rebounding rate was its worst of the season.

Holding Purdue to .92 points per possession on 37% two-point shooting with just a 20% offensive rebounding rate is an incredible effort for this Michigan defense. That’s a dramatic turnaround from the first meeting in West Lafayette, Michigan’s worst defensive performance of the season, when Purdue made 21-of-36 twos and scored 1.29 points per trip.

As the game ended, I could just imagine Bacari Alexander running into the lockerroom to tweet ‘gritty not pretty’. That was, unsurprisingly, the buzzword in the post-game media room. The bottom line is that this team just hasn’t been very gritty this season, so to win a game in this fashion feels like quite an accomplishment. Michigan withstood Purdue’s runs, kept within striking distance and then was able to steal a win down the stretch.

It becomes harder and harder to define this team and season. On one hand, the Wolverines are painfully close to the NCAA tournament bubble, on the other hand they are two games out of first place in the Big Ten and in play for a Big Ten Tournament double-bye. Tuesday’s trip to Columbus could be pivotal toward both goals as Michigan heads down the stretch in February.