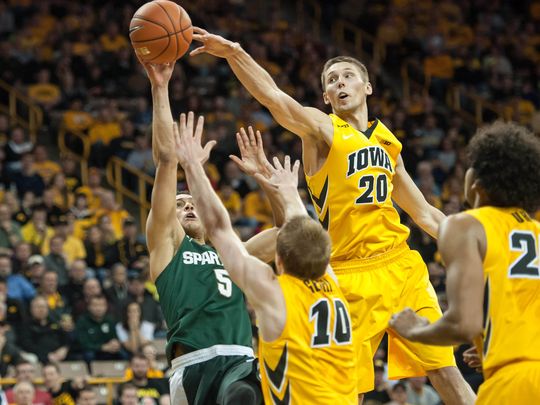 Luke Winn previously pointed out Jarrod Uthoff’s uncanny ability to block three-point shots which caused me to look a little closer at the numbers. Uthoff has blocked 74 shots this season and the average distance of his blocked shots is 9.26 feet from the rim — a far greater difference than any of the other notable shot blockers in the Big Ten.

Iowa now sits alone at the top of the conference and appears to be in great position to win the league.

Due to the unbalanced Big Ten schedules, we put together resume snapshots to help visualize what a Big Ten team has accomplished and what it still has to play. White boxes are games that are remaining on the schedule, tan boxes are games not on the schedule, red for losses and green for wins. The teams on the left side are organized by current efficiency margin. (H/T Aaron Barzilai).

Unsurprisingly, Iowa has one of the conference’s best resumes.

Wisconsin has now won seven games in a row and is the hottest team in the Big Ten by a wide margin. Am I overrating the Badgers at No. 2? Probably, but Indiana, Michigan State, Purdue and Maryland all lost this week. Wisconsin didn’t and was the first Big Ten team to win a conference game in College Park since Maryland joined the Big Ten.

Life is only going to get harder for the Badgers down the stretch. Wisconsin still has to play at Michigan State on Thursday and has trips to Iowa and Purdue left on the schedule.

Wisconsin’s resume shows the work that it still has to accomplish with the three difficult road games, but it also shows a team capable of beating some of the league’s best.

The efficiency margin statistics say that Michigan State is the best team in the Big Ten despite the fact that five conference teams have fewer losses than the Spartans. When Michigan State wins, it wins big. When it loses, it loses close. The Spartans’ last three losses have been by a combined three points, with one in overtime. Their last five wins have been by an average of 21.8 points per game.

Looking at Michigan State’s schedule, it should be in for a very strong finish with only one game left against the top seven efficiency margin teams.

Maryland goes as its defense goes. It’s no coincidence that the Terps’ four worst defensive performances of the season have been in their four losses this season. This is a team built off of its best-in-conference defense and the teams that have cracked it have knocked off Maryland. Now trailing Iowa in the loss column with trips to both Indiana schools left on the schedule, Maryland’s Big Ten title hopes appear to be waning.

It feels like every upper echelon Big Ten team had a great home win and a deflating road loss this week. Indiana, Purdue and Michigan State all fit the bill as the Hoosiers knocked off Iowa at home then watched their defense fall apart in the second half against Michigan State. The Hoosiers played a notoriously easy schedule in the first half of Big Ten play and still have games against Iowa, Maryland and Purdue left on the docket.

The biggest concern for Indiana heading down the stretch is that its defensive demons returned. The Hoosiers gave up over 1.2 points per possession in both games this week after building their conference record on the back of stingy defense.

Michigan got the bounce back wins it needed last week, taking care of Minnesota on the road and knocking off Purdue at home. Now Michigan heads to Columbus where it has won just once in the last 11 tries. A win could catapult the Wolverines into contention for a top-four finish, but a loss could have them holding on to make the NCAA tournament over the last few weeks of the season.

Purdue was out-rebounded and struggled to score inside against a Michigan team that it dominated earlier this season. I’m not sure how to explain Michigan out-rebounding the Boilermakers, but the Wolverines deserve a lot of credit for forcing Purdue’s bigs to shoot further away from the basket. Compare the Boilermakers’ shot charts in both games (via Shot Analytics) and look closely at the number of shots in the paint in both meetings.

13 games into the conference season, Ohio State’s best win is over Northwestern. There are plenty of hollow conference records in this year’s conference, but the Buckeyes appear to have the least impressive 8-5 of the bunch. But give Thad Matta’s team credit, they’ve at least handled their business against the bottom of the league and have put themselves in a position where a few upsets could go a long way.

This has been a trying year for Nebraska, which actually has better efficiency stats than Michigan and Ohio State despite playing a harder schedule, but Andrew White III is going to be a problem in this conference for the next year and change. White went for 35 points in a 70-54 win over Penn State, knocking down 6-of-10 threes and 5-of-7 twos. Per Shot Analytics, he’s now the second-most productive shooter in the conference compared to the shots he attempts.

The Wildcats picked up a nice rivalry win over slumping Illinois, but will have to go on the road to Purdue and Michigan for their next two games.

The Nittany Lions were unable to build on the momentum of their home win over Indiana and fell to Nebraska, 70-54.

Illinois lost its in-state battle with Northwestern, but should have a chance at a bounce back victory against Rutgers — one of the three conference teams its beaten this season. The game in New Jersey took three overtimes to settle, but I’d expect the home rematch to be more straightforward.

Minnesota continues to get close, but just can’t get over the hump. The Gophers suffered single digit losses to Michigan (at home) and Iowa (on the road) this week.

We’re a week and a half away from a potential 0-14 battle between Rutgers and Minnesota at the Barn. Perhaps scarier than a matchup of two 0-14 conference teams is that one (Minnesota) could be favored by double-digits with KenPom currently setting a 9-point spread.