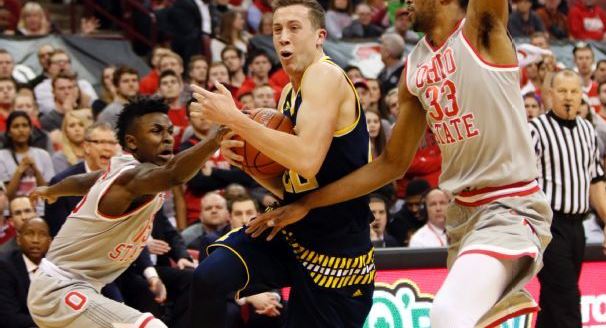 Michigan was without Caris LeVert once again and fell to a scrappy Ohio State team in Columbus on Tuesday night, 76-66.

Michigan was without Caris LeVert once again and fell to a scrappy Ohio State team in Columbus on Tuesday night, 76-66.

The Wolverines continued to struggle offensively, but they also lacked the defensive effectiveness that they showed against Purdue. Ohio State’s offense was nothing special on paper entering the game, but Michigan couldn’t string together the stops or scores to build any momentum on the road at Value City Arena.

There weren’t many heroes for the Wolverines as Derrick Walton struggled from the field and Zak Irvin was plagued by turnover woes. Mark Donnal led Michigan with 17 points and six rebounds in the loss.

It Was Over When:

Michigan managed to cut Ohio State’s lead to single digits at several junctures in the second half, but the Buckeyes always had the answer to stretch the lead back to 10. Michigan’s best chance was when a Zak Irvin jumper cut the Buckeye lead to 7 points with 4:52 to play, but Ohio State answered with a Trevor Thompson layup.

A driving and-one layup by Marc Loving helped the Buckeyes finally pull away. Loving’s drive past Aubrey Dawkins stretched the lead to 13 and the Wolverines were never able to threaten down the stretch.

Michigan’s offense was bad in the loss, but its defense was worse. The Wolverines allowed over 1.1 points per possession, days after they played their best defensive game of the season against Purdue. Michigan had no answer for Jae’Sean Tate’s motor and physicality inside and was outscored 38-26 in the paint.

Stat of the Game: Three-point shooting